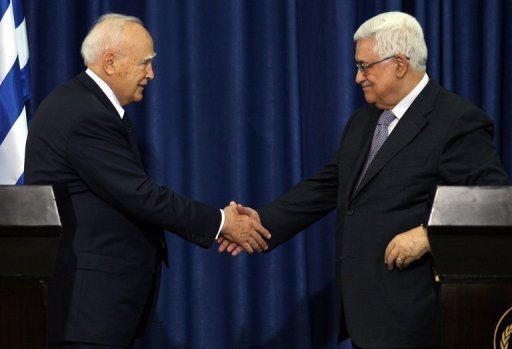 President Mahmud Abbas vowed Tuesday to take the Palestinian bid for statehood to the UN after the diplomatic Quartet failed to reach a breakthrough to revive peace talks.

“We will go to the United Nations and we hope the United States will not use its veto, but that we will go with its agreement,” the Palestinian leader told reporters after a meeting with Greek President Greece Karolos Papoulias.

“The fact that there is no statement from the Quartet is a negative indication that there is deep division between them,” Abbas said.

Palestinian negotiator Saeb Erakat told AFP that “there is no other option but to support the Palestinian plan to go to the United Nations to seek full membership for the state of Palestine on the 1967 borders”.

Russia’s Foreign Minister Sergei Lavrov brushed aside suggestions of a rift among members of the Quartet, however, one day after the group met in Washington but failed to make progress towards Mideast peace talks.

“It was a good meeting,” said Lavrov, one of four Quartet members to meet along with UN Secretary General Ban Ki-moon, EU foreign policy chief Catherine Ashton, and US Secretary of State Hillary Clinton.

“The fact that we didn’t produce a statement doesn’t mean we disagree and abandoned the effort. Our experts continue to discuss it,” Lavrov told reporters in the US capital.

The peacemaking group met as the Palestinians move ahead with their plan to seek UN membership for a state on the lines that existed before the 1967 Six Day War, covering the Gaza Strip and the West Bank, including east Jerusalem.

The plan is opposed by Israel, the United States and some European governments, and the Quartet had been expected to draw up a new initiative for peace talks that could persuade the Palestinians to drop the UN bid.

But the talks ended with no statement and no action plan, suggesting the parties were unable to agree on the best way forward.

“It is time for the international community to support the Palestinian plan to obtain membership for the state of Palestine on the 1967 borders because this approach will preserve the peace process and the two-state solution,” Erakat said.

He rejected any attempt to “equate” the Palestinian and Israeli sides and criticised any suggestion the two parties were equally to blame for the stalemate in negotiations, which have been on hold since September 2010.

The negotiations broke down shortly after they began when a partial Israeli settlement freeze expired. Israel declined to renew the freeze and the Palestinians say they will not hold talks while Israel builds on land they want for a future state.

Israel had no immediate comment on the Quartet talks, which had been billed as likely to be the last meeting of the grouping before the Palestinians seek UN membership when the General Assembly meets in September.

In Washington, a senior official in President Barack Obama’s administration, acknowledged the “gaps” that remained between the two sides.

“We’re realistic about the gaps, we know that more needs to be done, but ultimately it’s up to the parties to make the tough decisions,” the official said on condition of anonymity.

The source added there was an urgent need to “find a way to resume direct negotiations without delay or preconditions and to begin with a preparatory phase of talks to maximise chances of success.”

Abbas is scheduled to travel to Cairo for an Arab League meeting on Saturday to discuss the Palestinian UN membership bid.

“We want to know what the Arab position is, whether or not there are negotiations, on the issue of going to the United Nations,” the Palestinian leader said.

“There is still good reason to go to the meeting… despite the Quartet’s failure to issue a joint statement. We will discuss going to the UN with a joint Arab position,” Abbas said.