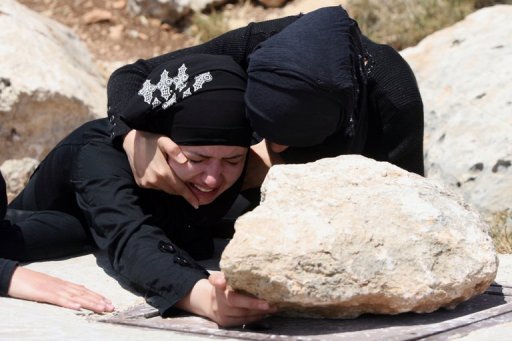 Aya’s remains were found bound, decomposed at the bottom of a well more than a year after she vanished without a trace, leaving her family beside themselves with worry.

The university student’s disappearance in April 2010 left her relatives increasingly ostracised in their southern West Bank village, an area known for its deeply conservative traditions and morals.

Neighbors assumed the worst — that their daughter had run away with a lover.

But the mystery was solved in May when police found her bones several miles from the family home in Surif, northwest of the city of Hebron — and triggered an unprecedented public outcry.

Within days the story emerged: her uncle and two of his friends apparently slayed the 21-year-old student of English in what he claimed was an “honour killing” — murder in the name of protecting a family’s reputation.

The uncle, Ekab al-Baradiya, and his alleged accomplices were arrested and are awaiting trial.

“They tied her to the back of the car and dragged her to the well before beating her, tying her up and throwing her into the well, still alive,” he said.

Such murders are not uncommon within conservative Palestinian society where close contact between men and women is frowned upon, and where the law affords leniency to a father, brother or uncle who kills a close female relative in order to “protect” the family’s honour.

But an unanticipated wave of outrage followed this particular murder, and forced president Mahmud Abbas to amend a decades-old law under which those citing “honour” as a defence could expect to receive a jail sentence of no more than six months.

Aya al-Baradiya had been tied up and thrown down the well while she was still alive, police said, in a gruesome death sentence for a lively and ambitious young woman who loved to paint.

The last time she was seen alive was when she left to sit an exam at Hebron University where she was studying English literature.

The news broke the family, their grief and outrage spilling out into the local community and moving them to action — in complete contrast with the wall of silence and shame that normally surrounds such crimes.

The family have absolutely no doubt that she was wrongly accused.

Walking haltingly towards the well where her sister’s remains were discovered, 25-year-old Hanin could not hold back her grief.

“Aya’s honour was as pure as this cloth,” she screamed, tears coursing down her face.

“She was pure — this had nothing to do with honour,” insisted her mother, Fatima. “These are a bunch of criminals.”

The motive behind the crime is still unclear.

Some reports suggested Aya was killed because she refused a proposal from her uncle’s son, while security sources said the uncle held ultra-conservative views and was dead set against her quest for education.

As details of Aya’s murder became public, it sparked a wave of outrage that spread across the southern West Bank, with people taking to the streets to demand changes to the law.

Thousands turned out to mourn at her funeral, and the ceremony was covered live on Palestinian television, a first for such a crime.

It was during the broadcast that a top Palestinian official rang through to pledge that Abbas would change the law, in a move that won the backing of three-quarters of the Palestinian population, a poll taken in June showed.

“Because we spoke out and knocked on doors, people are showing solidarity in Aya’s case, which has now become a case for all girls,” said family member Yasser al-Baradiya.

“If we hadn’t, this crime would have been ignored like all the others.”

It was a step women’s campaigners have been fighting to achieve for years.

Statistics compiled by campaigners show 29 women in the West Bank were killed in such circumstances between 2007 and 2010. And in the same period, nine more women saw no option but to take their own lives for fear of family reprisals.

Under the Jordanian penal code, a man who “surprises his wife or any close female relative” in an act of adultery or fornication may invoke a defence of “crime of honour” if he murders her.

If convicted, the perpetrators tend to receive a maximum sentence of six months.

The amendment, however, empowers the judiciary to decide whether or not the defendant’s claim that the killing was to defend a family’s “honour” is valid.

“The president’s decision is the culmination of the feminist struggle,” said Amal al-Jubeh, coordinator of the Women’s Centre for Legal Aid and Counselling in Hebron.

“The horror of this crime, the solidarity of the people and the immediate mobilisation of feminist groups, coupled with extensive media coverage, were the main factors behind this historic decision,” she said.

“The case of young Aya was the straw that broke the camel’s back,” said Hassan al-Awra, a legal adviser to Abbas, adding that the amendment must still be approved by the Palestinian parliament.

But Rania al-Sinjilawi, who works in a legal aid centre for women, fears the amendment “does not contribute much to stop the killings because the question of whether the motive was honour or not remains at the judge’s discretion.”

For now, the family is encouraged by the steps taken by the Palestinian leadership.

“The decree gave us some consolation,” admitted Aya’s mother, her eyes red from weeping. “Her blood didn’t go to waste. She died for the sake of the girls in Palestine and in the world.”

“Nothing will give us Aya back, but the president’s decree is excellent,” agreed her father, Ibrahim.

“These criminals must be executed. The president must show them no mercy to set an example.”