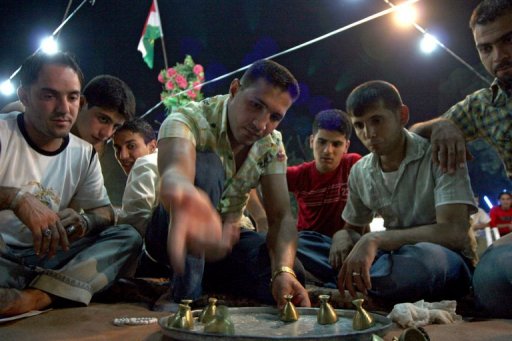 Ramadan may be best known for the daily dawn-to-dusk Muslim fast, but for some in Iraq the holy month is a time to enjoy a decades-old game that men play in courtyards across the country.

As security has improved nationwide, local communities have resumed organising city-wide matches of Mheibes, a fiery game where rival teams must find a ring hidden by their opponents.

At a club in north Baghdad, the mostly Sunni neighbourhood of Adhamiyah hosted a team from nearby Saba Abkar, with around 40 men on each side seated in plastic lawn chairs or on the ground.

“Mheibes is in our blood,” said Essam al-Malik, one of the match organisers.

“We never stopped playing it. Even during the sectarian war, we used to play, but only with neighbourhoods close to Adhamiyah,” the 55-year-old said, referring to the Shiite-Sunni fighting that erupted after the 2003 US-led invasion and peaked in 2006 and 2007.

The game begins with a player from one team draped under a blanket moving among his teammates and secretly handing a ring — which is “mehbis” in Arabic — to one of them.

The rival team designates one of their own to find the ring. If he is unsuccessful, the team that hid the ring gains a point. If he finds it, his team must hide the ring and try to rack up points of their own.

The first team to reach a pre-agreed number of points wins.

During the Adhamiyah-Saba Abkar match, Qahtan, a 30-year-old baker chosen as his team’s ring finder, strutted purposefully along the rows of the rival players, occasionally stopping to crouch and shout in their faces.

“Show me your hands!” he would scream, prompting players to hold out their closed palms. But Qahtan would look only at their faces, attempting to read their emotions to deduce which one was hiding the ring.

At one point, after doing this several times, he suddenly turned and rushed to one man, grabbed his right wrist, opened his palm and let out a fierce roar as he found the ring.

Music immediately erupted as his Adhamiyah teammates exploded in jubilation and lofted him on their shoulders, until the match resumed and it was their turn to hide the ring.

“You can tell who is holding the ring,” Qahtan said later, “because he sweats and shakes and makes more sudden movements than the others.”

“Knowing who is holding the ring, though, requires experience and talent.”

Mheibes is played across Baghdad, and in several other Iraqi cities throughout Ramadan, with matches typically starting after the dusk iftar meal that breaks the daily fast.

In Karbala, the holy Shiite city in south Iraq, authorities have organised a Mheibes championship, pitting localities from around the country against each other.

Teams from Baghdad, predominantly Shiite southern cities such as Diwaniyah, Najaf, Kufa, and mostly Sunni towns like Baquba and Mussayib, are all taking part, according to Salem al-Naqqash, the captain of the Karbala team.

“The games used to continue until dawn, and sometimes even until midday, until one of the teams would win,” said Malik of Mheibes matches, referring to years before the invasion that ousted Saddam Hussein.

Malik told of one match during the 1990s that took place on the last day of Ramadan.

It continued through the night, and upon realising at day-break that Ramadan had ended, the two sides postponed the rest of the game to the following year.

Since 2003, however, widespread violence has led not only to an overnight curfew requiring all Iraqis to be in their homes during the wee hours, but has also walled off neighbouring communities.

Adhamiyah, for example, lies across the Tigris river from the mostly-Shiite district of Kadhimiyah, with the two neighbourhoods connected by a single bridge that was closed to vehicle traffic for several years during the peak years of the sectarian bloodshed.

Qahtan recalled one match in 2007, the year before the bridge was fully re-opened, between the two neighbourhoods that aimed to promote reconciliation.

“The most beautiful game I participated in was between Adhamiyah and Kadhimiyah on Al-Aima bridge in 2007,” he said.

“We only played to bring people together — we did not care about winning.”