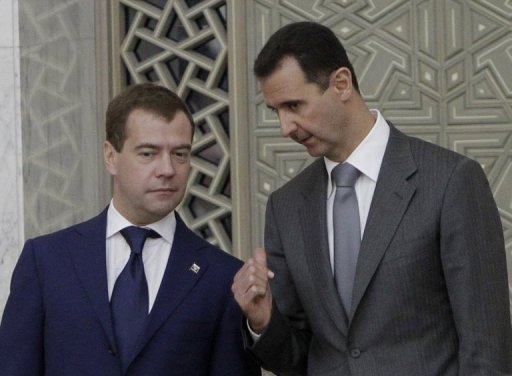 President Dmitry Medvedev told Syrian leader Bashar al-Assad on Friday to either reform or resign while warning that Russia would resist outside attempts to force him from power.

Medvedev said three days after Russia and China sparked global outrage by jointly vetoing a UN resolution on Syria that he wanted to see an end to the violent crackdown on protesters as much as Europe and the United States.

“Russia wants as much as the other countries for Syria to end the bloodshed and demands that the Syrian leadership conduct the necessary reforms,” Medvedev said in televised remarks.

“If the Syrian leadership is unable to undertake these reforms, it will have to go. But this is something that has to be decided not by NATO or individual European countries but by the people and the leadership of Syria,” he said.

Russia vetoed the UN Security Council sanctions resolution against its Soviet-era ally on Tuesday after arguing that moves aimed against the Syrian leadership could encourage protesters to resort to violence.

The Kremlin chief had previously accused some in the Syrian opposition of having ties to “terrorists” in comments underscoring the extent of Russia’s divide with the West in the closing months of his term.

Medvedev is set to hand over power to Prime Minister Vladimir Putin in a March job swap that will see the former KGB agent return to the presidency after a 2000-2008 spell in which he often bickered with the West.

But the incumbent president has had his own share of disagreements over what Moscow perceives as efforts by the West to insert its own allies in strategic countries of North Africa and the Middle East.

Medvedev said the most recent decision on Syria was in large part influenced by the NATO-led campaign in Libya that Russia opposed but refused to block at the Security Council in March.

Russia had criticised the Libya campaign as illegitimate and Medvedev warned on Friday that he would continue resisting all actions he thought were aimed at toppling governments that were on bad terms with the West.

“Russia will continue standing against attempts to legitimise through the UN Security Council unilateral sanctions aimed at toppling various regimes,” he said.

“This is not what the UN was created for,” said Medvedev.

“In essence, the text that was being proposed was a text that once again permitted the use of force,” he stressed.