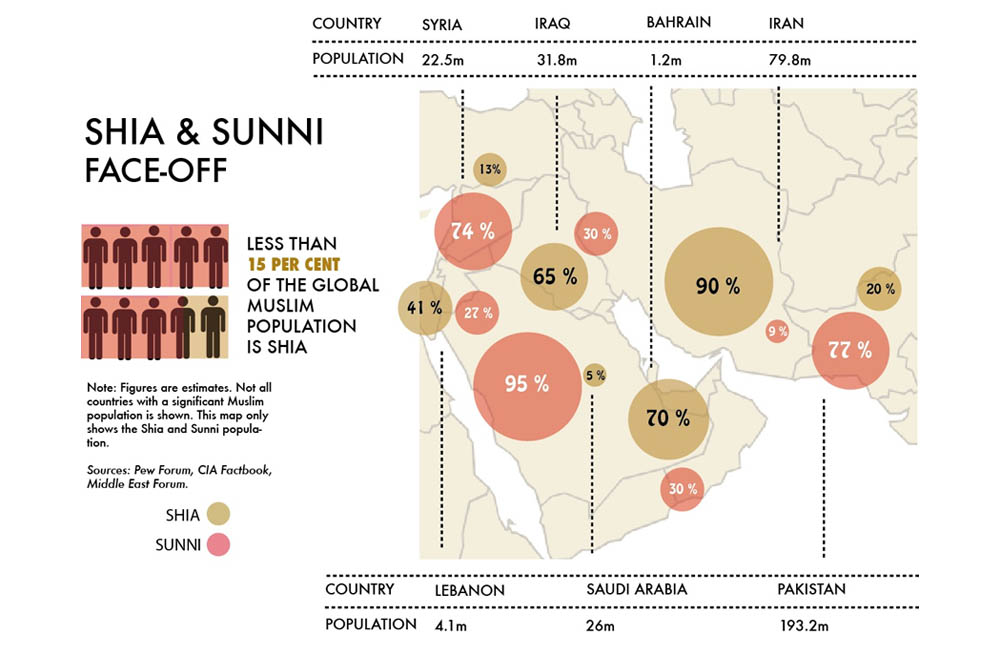 Your Middle East’s Kulsoom Rizvi breaks down the difference between Shia and Sunni Muslims.

Politics, competition, influence and power fuel the current sectarian tensions between Shia and Sunni Muslims, the two main branches of Islam. The root of the hostility is a political question in itself: who is the legitimate successor to the Prophet Muhammed?

Both sects share common religious beliefs: the five pillars of Islam, the Quran and Prophet Muhammed being the last messenger of God. The differences lie mostly in the Shia and Sunni interpretation of the hadiths and sharia law on how Muslims should define and govern themselves. But for the most part, the religious differences are superficial. The conflict and violence is more about political power, where geo-politics intertwines with theology.

BAHRAIN
The majority sect in this small Gulf state is Shia. However, the government is dominated by a Sunni monarchy, military and ruling elite. Shia Muslims began protesting for equality and recognition in the 1970s after the British left. The most recent large-scale protests erupted in 2011. Bahrain and its friends in Saudi Arabia retaliated by clamping down on the opposition, killing civilians.

SYRIA
Syrian unrest began with protests against President Bashar al-Assad’s regime in March 2011. The ruling elite in this war-torn country belongs to the Alawites, a minority offshoot of Shia Islam. The civil war has exposed underlying grievances between Shia and Sunni.

LEBANON
Lebanon has been relatively stable, but struggles to maintain a balance between its religious and ethnic sects. In the government, the President must be Christian, the prime minister is Sunni and the parliamentary speaker is Shia. Fighting has mostly been concentrated in the Sunni dominated North in small pockets near the Syrian border, with the Lebanese militant group Hezbollah aiding and supporting Assad’s regime.

IRAN
The 1979 Iranian Revolution was key to empowering the Shia community. Iran sponsored and encouraged Shia uprisings in Saudi Arabia’s oil rich eastern province. Keeping Syria in power is vital to Iran’s strategic interests in the Middle East. Syria has been the route to sending people, money, and weapons to groups like Hezbollah, a Shia militant group created by Iran. For Iran, it is all about regional interests.

IRAQ
This is the heartland of the global Shia community. For a long time, the majority Shia Muslims were discriminated by the Sunni-dominated regime. After the 2003 war and fall of Saddam Hussein, Shia Muslims stepped into power, targeting Sunni Muslims through government death squads and torture. Sunnis responded with suicide attacks and bombings. The war has amplified tensions between the two, emphasizing growing nationalistic attitudes of Shia Muslims.

SAUDI ARABIA
Sunni-ruled Saudi Arabia consistently feels challenged and threatened by Iran in the race for regional power. Iranians are neither Arab nor Sunni. Saudi Arabia fears Iran will stir unrest among the Shia Muslims living in the Gulf.

The information in this article is based on infographics published in a university project paper.

Note: This infographic is based on interviews with a number of Shia and Sunni scholars, experts and academics. This is a controversial and complex issue, with interpretations varying from country to country and person to person.

EDITOR’S PICK Christopher Dekki: A (very) rough guide to the Christians of the Levant