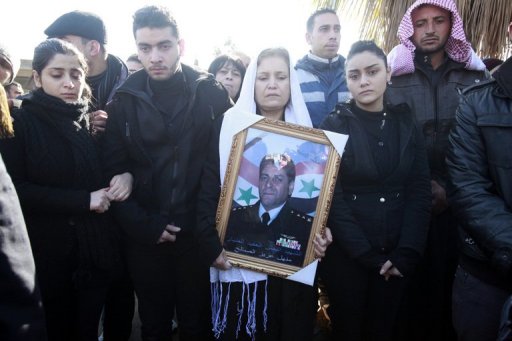 Syrian forces killed at least 23 civilians on Sunday, seven of them in the flashpoint region of Homs that has been under siege for several weeks in an operation to crush dissent, a rights group said.

The latest violence came as the Arab League voted to impose a raft of diplomatic and economic sanctions against President Bashar al-Assad’s regime for defying an ultimatum to allow observers into the country.

Seven civilians were killed by security forces gunfire across the central province of Homs, including one shot dead from the roof of a building in the town of Qusayr, the Syrian Observatory for Human Rights said.

Further north, in the restive province of Hama, three people, including a 17-year-old boy, were killed by gunfire when security forces and troops raided the town of Karnaz, the Britain-based group said.

Near Damascus, 10 people were killed, including a 14-year-old boy, and 13 civilians were wounded as troops fired “indiscriminately” and made arrests in a raid on Rankuss district, the Observatory said.

Security forces killed at least two people and wounded eight others when they shot at mourners during the funeral of a man in the eastern oil hub city of Deir Ezzor, it said.

Another person was killed in the Kafarnubol area of Idlib province in the northwest after being arrested by security forces “for selling fuel to militants,” the group added.

Clashes also erupted between regular troops and deserters in the region of Talbisseh, another town in Homs province, said the watchdog in statements received in Nicosia. “Two troop transporters were destroyed.”

Security forces also arrested 17 people in raids on the village of Muhsen in Deir Ezzor province, it added.

The Observatory’s chief also reported that regime forces carried out acts of vandalism in the Kafarnabuda region of Hama, further north of Homs province.

The Local Coordination Committees which organise anti-regime protest said several rallies were staged across the country, including four small ones in Damascus where demonstrators urged foreign intervention.

“He who says no to military intervention is a traitor,” read one sign held by protesters, according to a YouTube video, in the restive Damascus neighbourhood of Qabun.

On Saturday, at least 23 civilians and 12 members of the security forces were killed in clashes across the country, activists said.

The 22-member Arab League agreed on Sunday to ban Syrian officials from visiting any Arab country, to freeze government assets, suspend flights and halt any transactions with the Syrian government and central bank.

State television said in a terse statement that the Arab decision to impose sanctions on a member state was “an unprecedented measure.”

Several hundred Syrians gathered in a central Damascus square to denounce the move.