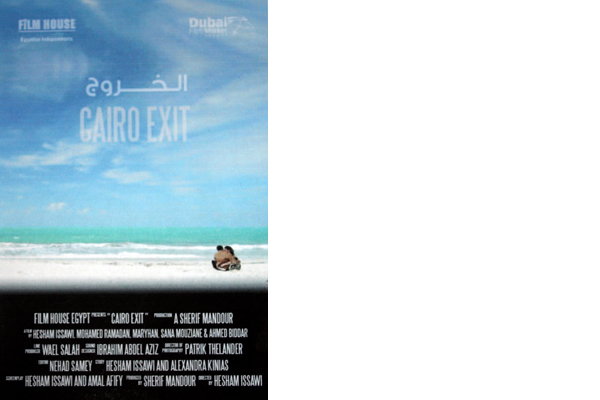 Two years ago, Egyptian-American director and screenplay writer Hesham Issawi approached me to collaborate on writing a screenplay about a forbidden love affair between a Coptic woman and her Muslim lover. We set gear to work together with the emphasis of exposing the hardships the young couple, who lived in the slums of Cairo, encountered in their daily lives. The challenges they faced escalated after the girl became pregnant. To salvage their love and have a better future, the couple had to leave the country and set forth to Europe by paying smugglers to take them by boat to the shore and thus the movie’s title “Cairo Exit” came to be. The storyline of “Cairo Exit” was truthful to the lives of millions of unemployed and underprivileged young Egyptians who survive in continuous chaotic clutter as they struggle to make ends meet with nothing but ghosts of a bleak future to look forward to.

The poignant journey of exploring the fictional lives of the couple and writing about it was culminated with a joyful crescendo when a producer acknowledged our efforts and stepped on board. The selection of the cast and crew commenced and the director of photography Patrik Thelander, who flew in from Los Angeles, was already scouting for locations. Not long after, the festive climax was transformed into a nightmare. The preparations for shooting froze as the censorship bureau denied approving the screenplay on the basis that the religious faith of the young woman should be changed to Islam. The interfaith relationship between the characters became the major obstacle to produce the movie.

On their journey from a script to movie screens, Egyptian movies require triple permits before they see the light of day. The screenplay must first be approved before a shooting permit is issued. Before the movie is shot, the censorship bureau can demand the removal of scenes, tamper with the story or even change the title as happened with “Cairo Exit” (the initial title was “Egypt Exit”). Unless producers comply with such requirements, movies will forever remain on paper. Once a movie is shot, a screening permit must be granted and as a final reminder of who has the upper hand, the bureau reserves the right to revoke the screening permit at any time and for any reason.

Refusing to comply with the requirements to change the faith of the female character, the screenplay for “Cairo Exit” was not approved. In lieu of shooting permits, the movie was shot underground since carrying a film camera on the streets of Cairo without a permit is a felony. In spite of the games of hide and seek played between the movie crew and policemen roaming the streets in civilian clothes, shooting of the film was completed.

The first censorship law in Egypt was drafted on November 26, 1881 as a reaction to Ahmed Orabi’s revolution against the British occupation. To curb the freedom of press after nationalistic newspapers in support of the revolution flooded the market, control over the media was born. An amendment to the law was made in 1904 that included censorship over movies and theatrical performances. Prior to that date (since 1896), theatrical performances and movies screened in Egypt were under the direct control and discretion of the police chief.

Against the belief of the masses, the censorship bureau was not essentially created to protect family values, but its objective was primarily political to safeguard the government and its leaders. Unfortunately, nothing has changed since then. However, with the religious surge in Egypt, those who proclaimed themselves as custodians of morality rode the wave to benefit from the censorship that has assisted them in spreading their ideologies.

To silence the voices and switch off the brains of the people, censorship becomes essential for the existence of totalitarian regimes. By adding a tint of religious and family values to its objectives, no one dares to dispute its motives. It comes as no surprise that movie censorship thrived under the reign of Mubarak’s corrupt regime.

To safeguard moral and family values, countries worldwide have instituted the rating system whose purpose is to alert viewing audiences of the contents which maybe objectionable to some. However, banning movies in order to stop people from watching them is a common practice of totalitarian control. It is an insult to assume that people are unable to think for themselves and thus need the guidance from decision makers to tell them what they should watch, or how they should think and behave.

As in other countries, Egypt also has its own inconvenient truths embedded in the society such as female genital mutilation, pre-marital sex, women who turn to prostitution for a living or interfaith relationships. Banning movies that discuss such issues on the basis that they defame the society is a form of mental manipulation as denial of an existing problem is a delusional approach to solve it. On the contrary, such important social issues require people’s awareness rather than wishing them away. Only when they are addressed they may be resolved.

In addition, the ban of movies or books results in the restriction of creativity, which unfortunately doesn’t come with an operating manual that outlines guidelines to follow. Over the years, censorship has achieved nothing but an overall decline of talents.

It is ironic to see that books published in Egypt in the early twentieth century are being banned in the twenty first century. No wonder that when the dispels of the cultural renaissance of the twenties and thirties in Egypt, like Abbas Mahmoud Al- Akkad and Naguib Mahfouz, two of Egypt’s most notable writers, took responsibility of the censorship bureau, Egypt’s cinema witnessed its Golden Age. The set back of the Egyptian movie industry happened with the 1952 revolution when the industry was nationalised and censorship escalated to protect the revolution.

Today’s censorship officials in Egypt are the sons of the era that witnessed the cultural decline. Their qualifications are not important anymore because the job description no longer requires creativity and talent, but total submission to the regime’s doctrine. In a conversation with Hesham Issawi about why a movie like “The Yacoubian Building” would be given a green light while others with less controversial issues don’t, he stated, “The movie looked anti-government, but in reality it was very much what dictators do; allow certain films that appear to be critical of the government to be screened in order to show they have a free society. But in fact the movie promoted their system.”

In the aftermath of the Egyptian revolution, an event that has opened the gates for freedom of expression, there are speculations that censorship on movies will be reduced or even abolished. “Many scripts that were banned under Mubarak were given the green light after the revolution,” Issawi said.

With this news circulating, one only hopes that “Cairo Exit” will soon be seen by the people who inspired its story.