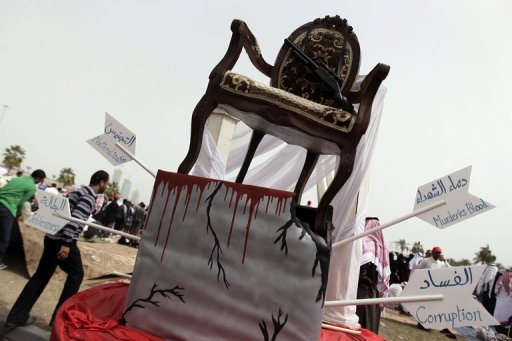 The Sunni Muslim monarchies of the Gulf fear that Shiites on the Arabian peninsula will rise up against their rule, inspired by the Arab Spring, community leaders in the region say.

“They want to transform the Arab Spring into a ‘Shiite Spring’,” said Abdellatif al-Mahmud, a Sunni cleric in Bahrain, where a protest movement led by the Shiite majority was crushed in March.

The Arab Spring, which has swept the region and toppled three autocratic leaders, “has whetted the appetite of Shiites in our region,” Mahmud told AFP on the sidelines of a Doha seminar on the role of religious diversity in the Gulf.

Walid Tabtabai, a Kuwaiti Sunni, was even more virulent.

“Since the Shiites are the majority, they are attacking Sunnis,” he said, citing the case of Iran, as well as Iraq after the fall of Saddam Hussein’s Sunni regime in 2003.

“The Arab Spring involves all faiths and all communities, including the Amazigh,” or Libya’s Berbers, who helped to overthrow Moamer Kadhafi’s regime, he said.

Bahrain’s crackdown on Shiite protests, carried out with the help of other Gulf monarchies, raised tensions in countries with Shiite minorities, including Kuwait and Saudi Arabia, where four people were killed last month in clashes with security forces.

“The problem is political, and not confessional,” said Ali Salman, whose group calls for democratic reforms to ensure equality and eliminate discrimination among Bahrainis.

His analysis is shared by Kuwaiti intellectual Mohammed al-Rumaihi, said it is necessary “to promote the sense of citizenship” in order to get rid of religious and tribal communalism.

“A weak sense of citizenship promotes sectarianism and creates a gap between the state and people,” she told the seminar.

However, the proximity of predominantly Shiite Iran raises concerns and suspicion in its Arab neighbours who fear their own Shiite communities are being influenced by Tehran, which has clear ambitions to establish itself as a regional power.

Shiism was born as a result of theological differences about the succession of the Prophet Mohammed.

The Sunni majority define themselves as the ones who maintain and apply the doctrines, standards, practices and traditions established by the prophet.

“We must disconnect from this historical inheritance which blocks us all,” said Said Hareb, an academic from the United Arab Emirates.

“We cannot change the past, but we can help build the future.”

But the reality on the ground is more difficult.

“We do not know how things are going to end up next week in Qatif,” in Saudi Arabi’s Eastern Province, during the Shiite Ashura commemoration, said Hani, referring to deadly clashes in late November.

Eastern Province is home to the majority of the conservative Sunni kingdom’s Shiite population of around two million, who represent around 10 percent of Saudis.

The ceremony marks the killing of Imam Hussein, grandson of the Prophet Mohammed and third Imam of Shiism, by armies of the Umayyad caliph Yazid in 680 AD.