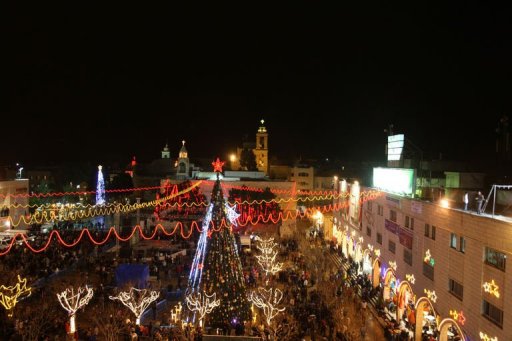 Tens of thousands of Christians flocked to Bethlehem on Saturday to celebrate Christmas. Peace was a central theme in Patriarch of Jerusalem Fuad Twal’s Christmas homily delivered in Bethlehem.

“We ask for peace, stability and security for the entire Middle East,” Twal said.

Twal, the most senior Roman Catholic in the Middle East, urged “the return of calm and reconciliation in Syria, in Egypt, in Iraq and in North Africa” at the midnight mass held in the place of Christ’s birth, according to Christian tradition.

In popular uprisings in Tunis and Egypt which ended decades of “secular” dictatorships, Islamist parties have taken the front stage. Egypt’s main Islamist parties emerged on Saturday as winning 65 percent of votes for party lists in the second round of the new parliament.

The UN Security Council says that Syria has killed more than 5,000 of its people in recent months, and Thursday attacks in Iraq killed 60 people, heightening sectarian tensions less than a week after US troops withdrew.

“O Child of Bethlehem, in this New Year, we place in your hands this troubled Middle East and, above all, our youth full of legitimate aspirations, who are frustrated by the economic and political situation, and in search of a better future,” Twal said.

Twal also addressed the Palestinians, welcoming Palestinian Authority president Mahmud Abbas who attended the mass, and congratulating him “in his unfaltering efforts to achieve a just peace in the Middle East, a main thrust of which is the creation of a Palestinian State.”

The patriarch said the Palestinians “recently turned to the United Nations in the hope of finding a just solution to the conflict,” and noted that “they have been asked to re-engage in a failed peace process,” which “has left a bitter taste of broken promises and of mistrust.”

As day broke on the not-so-little-town of Bethlehem, a few miles south of Jerusalem, residents readied to welcome thousands of pilgrims who wanted to see where the Bible says Jesus was born to a couple from Nazareth.

In the afternoon, Twal made his solemn entry into the birthplace of Christ accompanied by Palestinian Scouts playing bagpipes, an inheritance from the British mandate in the first half of the 20th century.

Christmas is a national holiday in the Palestinian territories.

Hotels and guest houses across this ancient town perched on the hilltops were packed to capacity, Palestinian officials said, with more than 50,000 visitors from around the world expected.

“Hotels are full. We have no rooms left even though the number of hotel rooms has multiplied in the last three years,” Palestinian tourism minister Khulud Daibes told AFP.

Christmas Eve celebrations focus in and around Manger Square, the central plaza next to the Church of the Nativity.

The church is built over the site where Christians believe Mary gave birth to Jesus in a stable, and laid him in an animal’s feeding trough, or manger.

The boy scouts, with their drums and bagpipes, marched through the town during the afternoon for the annual Christmas parade ahead of concerts and other entertainment on what is the year’s biggest tourist attraction in the Palestinian territories.

A huge Christmas tree covered in lights and decorations dominated the centre of the square, which filled up with excited visitors, some wearing red Santa hats, others in the sombre garb of various monastic orders.

Tourists snapped pictures of the giant tree and of a local dressed up as Father Christmas, as a group of foreign activists in Santa hats, each wearing a letter on their clothes, lined up to spell the words: Free Palestine.

There were also Muslims among the crowds. Many veiled women brought their children to join the celebrations over the birth of Jesus, or Isa in Arabic, whom they revere as a prophet.

The Israeli army eased security measures to facilitate the arrival in Bethlehem of Palestinian and Arab-Israeli Christians.

The town is cut off from neighbouring Israel by part of the separation barrier that snakes along, and often inside, the line dividing Israel from the West Bank.

Roman Catholics, Protestants and some Eastern Orthodox celebrate Christmas on December 25, but other Orthodox and oriental churches do not do so until January.