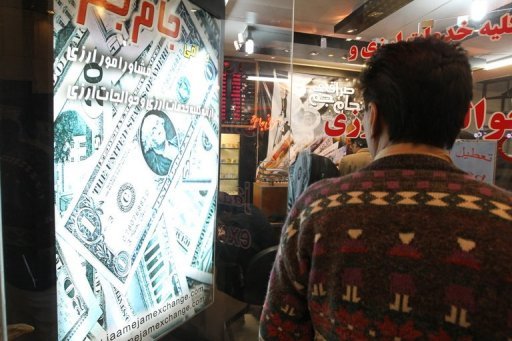 Iran said on Thursday it was “unconcerned” about an imminent EU ban on its oil, saying it would endure the extra sanctions even though they amounted to “an economic war.”

“Iran has always been ready to counter such hostile actions and we are not concerned at all about the sanctions,” Foreign Minister Ali Akbar Salehi said in a joint news conference with visiting Turkish Foreign Minister Ahmet Davutoglu.

“We have taken provisional measures. We have weathered the storm for the past 32 years and we will be able to survive this as well,” Salehi said.

“These sanctions are an economic war against us,” Economy Minister Shamseddin Hosseini said, according to the official IRNA news agency.

Diplomats in Brussels said on Wednesday that the 27-nation EU bloc has reached an “agreement in principle” to ban Iranian oil imports and was discussing the timing of when the measure would begin.

The ban would add to other sanctions already imposed by the West, including a US measure enacted last weekend that targets Iran’s central bank, which processes most of the Islamic republic’s oil sales.

The European Union is the second-biggest destination for Iranian oil after China, accounting for around 15 percent of the 2.6 million barrels exported each day, or some 450,000 barrels.

Iran relies on oil sales for 80 percent of its foreign revenues.

The West is squeezing Iran over its nuclear programme, which the United States and allied nations fear is being used to develop an atomic bomb.

Iran insists the programme is exclusively for peaceful, civilian use and has warned it could resort to drastic measures if it is directly threatened.

Military and political leaders have threatened to close the strategic Strait of Hormuz in the Gulf — through which 20 percent of the world’s oil flows — to all Middle East oil tankers if Iran’s petroleum sales are blocked.

They have also warned the “full force” of its navy will be unleashed if the United States tries to redeploy an aircraft carrier to its 5th Fleet base in Bahrain, in the Gulf.

The developments were underpinning a rise in oil prices.

Despite the warnings and studied insouciance over sanctions, Tehran has also been holding out the possibility of it returning to talks on its nuclear programme that have been stalled for a year.

Although her office said it was still waiting for a formal response from the Iranians, Salehi said Iran’s top nuclear negotiator, Saeed Jalili, “has said in the past couple of months that Iran is ready to resume talks.”

He said he was waiting for Ashton to propose a date and venue.

“Personally I think that Turkey is the best place for the talks to take place. But it should be at a place of mutual agreement,” he said.

Davutoglu told the Tehran news conference that he had conveyed Ashton’s request for a formal reply, and said: “We want to see both sides go back to the negotiating table.”

The United States on Wednesday hailed the EU move towards banning Iranian oil and said it wanted other countries around the world to follow suit.

“We do believe that this is consistent with tightening the noose on Iran economically,” US State Department spokeswoman Victoria Nuland said.

To that end, US Treasury Secretary Timothy Geithner was to travel to China and Japan next week to discuss sanctions “coordination.”

Beijing on Wednesday said it opposed “unilateral sanctions” against Iran. But Washington is hoping that, at the very least, China will extract deep discounts if it continues to buy Iranian oil.

After plummeting to an all-time low against the dollar on Monday, in the wake of the new US sanctions, Iran’s central bank stepped in to shore up the rial by imposing a capped exchange rate.

After many exchange bureaux refused to sell dollars at that level, authorities seemed to drop that artificial rate, and on Thursday the rial was trading at 16,000 to the dollar — off its record low but still very weak.

The government has insisted the volatility is unrelated to the sanctions.