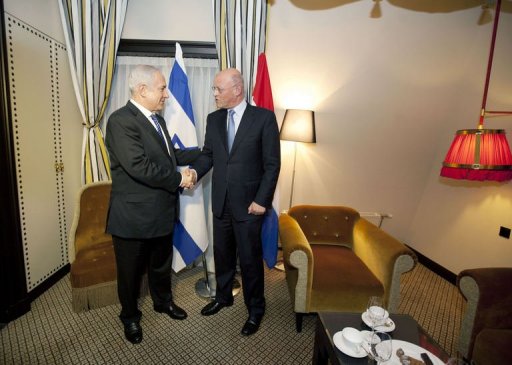 Speaking at Amsterdam’s historic Portuguese Synagogue, Netanyahu who is on a two-day working visit to the Netherlands, also compared Israel and his host country, as “small, but great in spirit.”

“The one issue in which we stand together is in opposing Iran’s nuclear ambitions,” Netanyahu said to loud applause by the audience, mainly members of the Netherlands’ 45,000-strong Jewish community.

“I thank the Dutch government for their strong stance on sanctions against Iran,” Netanyahu said, adding sanctions targeting Iran’s Central Bank and its oil exports “must be applied now”.

European governments are set to implement an Iranian oil embargo by the start of July, giving companies time to phase out existing contracts, EU diplomats said this week.

“Iran must not be allowed to develop nuclear weapons, period,” said Netanyahu.

Security was tight around the 17th century synagogue in Amsterdam’s old Jewish Quarter, with police and a security company frisking the audience ahead of the meeting.

Netanyahu on Thursday is scheduled to meet Dutch Queen Beatrix, and attend a working lunch with his counterpart Mark Rutte.