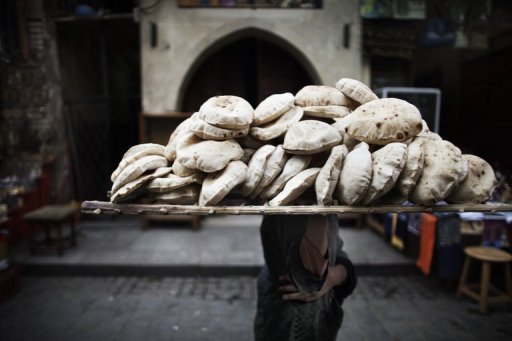 A year after Egypt overthrew Hosni Mubarak, the poor state of the once-growing economy of the Arab world’s most populous nation poses a threat to its restive transition to democracy.

With an estimated growth rate of one to two percent — compared with between five and seven percent in past years — the government is looking to the International Monetary Fund and donors to fend off a possible social explosion.

“One year after the revolution, the economy is in a state of anarchy, out of control,” said Salah Goda, the director of the Economic Research Centre in Cairo.

Key earnings from tourism fell by 30 percent, a shortfall of four billion dollars, according to official statistics that some tour operators believe are rather rosy.

As ratings agencies steadily degrade it, investors are no longer jostling to buy into Egypt, which has a workforce sometimes cheaper than China’s and a market of 82 million people.

At the centre of the country’s economic concerns is the melting away of its central bank’s foreign currency reserves, which dropped by more than half in a year, from $36 billion in January 2011 to $16.3 billion.

Coupled with a deficit of 8.7 percent of GDP — more than 10 percent, according to some economists — there are doubts that Egypt can maintain its costly subsidy system.

The subsidies cover such essentials as bread, cooking oil and gas. Removing the subsidies raises fears of a social explosion in a country where 40 percent of the population lives on just two dollars or less a day.

Rumours of fuel shortages for several days in January led to long queues of cars at petrol stations across the country, reflecting Egyptians’ nervousness on the topic.

Reforming the system, whether under pressure from the sagging economy or international donors, could place the military-appointed caretaker cabinet in a dangerous position.

“Changing the policy of subsidies on food, petrol or butane gas can lead to political disaster,” said Hamdi Abdelazim, an economist at the Sadat Academy for Management Sciences.

The depreciating public finances “will weigh on the government’s ability to ask for credit from international and domestic funders,” said economic analyst Zeinab Abdelrahman.

After initially turning it down, Cairo decided to ask for an IMF loan of $3.2 billion, and an additional billion from the World Bank.

But amid growing dissent against military rule, a campaign by the authorities against civil society groups, including American ones, may affect these loans.

World Bank chief Robert Zoellick said he expected “tensions” as Egypt requests aid from the international lender, which in turn would demand progress on governance and democracy.

“They’re reaching out to us, to try to see about financial support,” Zoellick said at a conference in the US city of Pittsburgh.

“But if we do provide initial financial support to the government in general, we will want … to make sure it’s transparent, that it relates to some of the changes that people were calling for or a broader social accountability. And there’ll be tensions with that.”

Even if these funds come through, they would represent less than half of the $10 to $12 billion needed to keep the economy afloat, according to government figures.

Funds from Arab donors had been expected to help fill the gap. But Prime Minister Kamal al-Ganzuri has acknowledged that most of the funds never materialised.

Some Egyptians also fear that European generosity may also be curbed to help save the Eurozone.

And the almost monthly outbreaks of deadly protests amid the confused political atmosphere do not encourage international financial backing.

The ruling military faces growing challenges, while the government it appointed has only months left to serve before a presidential election, with Islamists dominating a newly elected parliament.