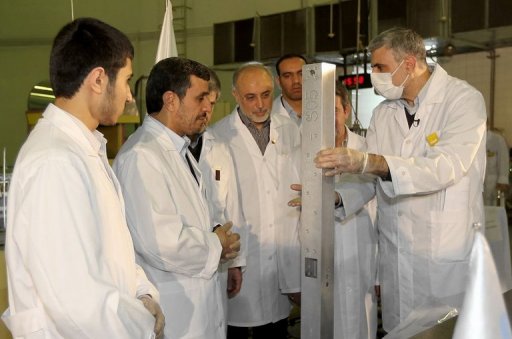 Iran on Thursday expressed hopes of reviving moribund talks with world powers, a day after the Islamic republic unveiled what it described as major progress in its controversial nuclear programme.

“We have always welcomed the principle of negotiations and we believe that, with a positive approach and spirit of cooperation, there can be a step forward in these negotiations,” foreign ministry spokesman Ramin Mehmanparast was quoted as saying by the Fars news agency.

Iran on Wednesday sent a letter confirming its readiness to discuss resuming negotiations in response to an October 2011 offer in that sense made by EU foreign policy chief Catherine Ashton.

The last round of talks between Iran and the so-called P5+1 group — UN Security Council permanent members Britain, China, France, Russia and the United States, plus Germany — collapsed in Turkey in January 2011.

Iran’s tardy reply to Ashton appeared to be linked to the timing of its nuclear announcements also made on Wednesday, which collectively suggested the country had made strides in its atomic activities despite severe Western and UN sanctions.

He and other officials also said Iran had added 3,000 more centrifuges to its uranium enrichment efforts and was stepping up exploration and processing of uranium yellowcake.

The declarations were meant to underline Iran’s progress in mastering all aspects of the nuclear fuel cycle and underline its commitment to what it said was a purely peaceful atomic programme for energy generation and medical use.

They also underlined the Islamic republic’s determination to push on with nuclear activities despite US and EU sanctions aimed at throttling its economy, especially its all-important oil exports — and despite speculation Israel or the United States could launch air strikes against its nuclear facilities.

The state newspaper IRAN said the reactor fuel plate advance gave Iran “the upper hand” in its future negotiations with the P5+1.

But Washington, which fears Iran is trying to develop atomic weapons, was quick to dismiss Wednesday’s announcements as “hyped” and “not big news”.

The Iranians have for months been boasting of progress, State Department spokeswoman Victoria Nuland said, but they are in fact “many, many months behind” their own calendars.

Israeli Defence Minister Ehud Barak told Israeli state radio in a telephone interview from Tokyo that the Iranians were “boasting of successes they have not achieved,” even though he admitted they “are continuing to progress” in the nuclear field.

Tensions between the two arch-foes rose significantly this week after a series of bomb incidents in India, Thailand and Georgia targeting Israeli diplomats. Israel blamed them on Tehran, which denied any involvement.

Russia, which thus far has protected Iran against Western diplomatic efforts to broaden sanctions, has also noted the developments in the Islamic republic’s nuclear activities.

Ryabkov urged talks, with real concessions for the Iranians, warning that otherwise the nuclear risks would increase.

“We are concerned that the distance that separates Iran from the hypothetical possession of technologies to create nuclear weapons is contracting,” he said.

Suggestions that Iran was engaged in research and computer simulations to make nuclear warheads and fit them to its ballistic missiles formed the thrust of a November report by the UN nuclear watchdog, the International Atomic Energy Agency.

A high-level IAEA delegation visited Tehran late last month to discuss the concerns. But one diplomat at IAEA headquarters in Vienna said afterwards that the Iranians “quite cleverly stonewalled for three days.”

The delegation is due to return to Tehran next Monday. The outcome of those discussions could be key in determining the path towards wider talks between Iran and the P5+1.