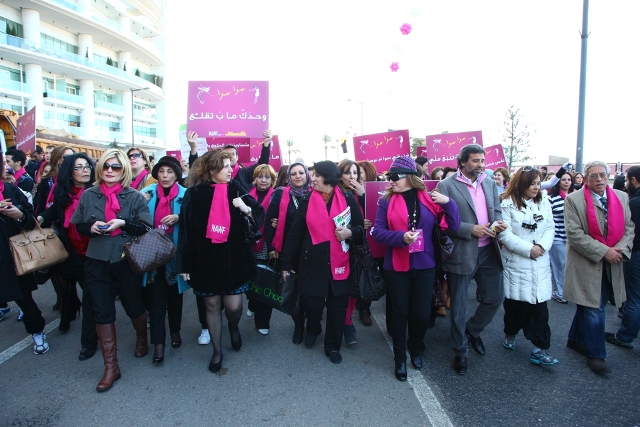 Women have occupied a central role in the popular uprisings that have raged across the Arab world in the last year. The faces of political activists like Yemen’s Tawakul Karman, Syria’s Razan Ghazzawi and Tunisia’s Lina Ben Mhenni have, at least in many Western media outlets, become emblematic of regional calls for greater democracy and improved living conditions.

With the global spotlight shining on Arab women, it was not altogether unsurprising when organizers of the annual New Arab Woman Forum  (NAWF) chose women’s role in the revolutions as the theme for their Beirut meeting earlier this month.

Al-Hasnaa, a pan-Arab women’s magazine based in Lebanon, has organized NAWF for the last five years. It brings together prominent personalities from across the region for two days of discussions on the place of women in Arab society, culture, politics, and economic activity.

“We at Al-Hasnaa magazine believe that women’s issues are today a cause common to all Arab communities,” the organizers wrote on the eve of this month’s conference. “One of the major prerequisites for the continued advancement of Arab societies is that women should be free of all restraints so that they can play a leading role in economic and social development at all levels and in all fields.” The conference, they promised, would take “full account of the historic dimensions of the ongoing ferment and revolution in the region as it continues to follow up, analyze and discuss leading political and social issues of the hour.”

Despite the stated interest in advancing women’s causes, NAWF was met with scathing criticism from Arab feminists and disappointed attendees who dismissed it as a public relations venture with only a superficial interest in gender equality.

Even before the meeting had taken place, Lebanese women groups led by the feminist collective Nasawiya, had issued a press release condemning the elitist nature of the forum, which was held at a five-star hotel at a fee of $300 per person.  “It felt less like an enriching debate and more like watching people have coffee,” feminist activist Paola Salwan Daher complained.

Such vitriol against the conference is not new- NAWF has been dogged by criticism since its inception. During the 2009 forum, a number of participants left in disgust after Lebanese journalist May Chidiac launched a sectarian tirade against Belgium’s first veiled MP, which culminated in the politician bursting into tears. Detractors say crucial debates, such as women’s rights to divorce or to equal protection and standing before the law, are virtually ignored. They also complain that the forum favors celebrity endorsements over speakers with actual involvement in advancing women’s rights. The event is usually held under the patronage of a high profile woman, such as Emirati Princess Haya Bint Al Hussein, Lebanese first lady Wafaa Sleiman or MP Bahia Hariri, sister of Lebanon’s assassinated former Prime Minister Rafik Hariri – women who are arguably more famous for their attachment to ruling men than for their individual commitment to women’s rights.

During this year’s forum, complaints about irrelevant speakers seemed fair after Syrian actor Duraid Lahham used his time at the podium to castigate women. Gender inequality was “all the women’s fault,” he told a bemused audience. “Violence (against women)? What violence? Men are also subjected to violence and they too have rights.”

In keeping with its theme of women in the revolutions, this year NAWF organized a short march for participants to call for gender equality in the region. The choice of route was itself indicative of the socio-economic group present at the forum, with marchers starting from the luxury Four Seasons hotel and walking through the upscale streets of Downtown Beirut, which are privately owned by the controversial construction company Solidere. “In the end, the protest was a symbolic action by women of the upper classes who wanted to take part in the Arab Spring in their own way,” wrote Lebanese journalist Ahmad Mohsen.

May Abi Samra, a young blogger who attended the forum, said she was appalled by the exclusive nature of the participants and the superficial manner in which crucial issues, like women’s political participation, were handled. “It was a fashion show/cocktail party,” she wrote. These “plastic women were actually debating their role as women in the Arab Spring, while wearing their finest jewelry and clothes … reaffirming society’s gender roles which expect women to have only one job: seducing men.”

In an irony that was perhaps lost on her audience, one NAWF speaker used a panel discussion on the Arab uprisings to criticize the exclusivity of mainstream Arab women organizations. “I call on women’s movements to rethink their elite discourse, which is far removed from the experiences of poor marginalized women,” said Nabila Hamza, the Tunisian head of Foundation for the Future, a Jordanian organization.

In response to criticism about the hefty conference fee, this year NAWF invited a number of students to attend for a “symbolic” $20. The concession did little to appease the anger of many women’s groups, however. “There was no real economic diversity in the rooms of a deluxe hotel, in a country where the average salary is $700 a month and where many households need to have two jobs or side occupations to make ends meet,” Daher wrote.

“With the amounts paid for that lavish hotel and with the money the sponsors poured into it, couldn’t a more creative approach (have) been taken?”