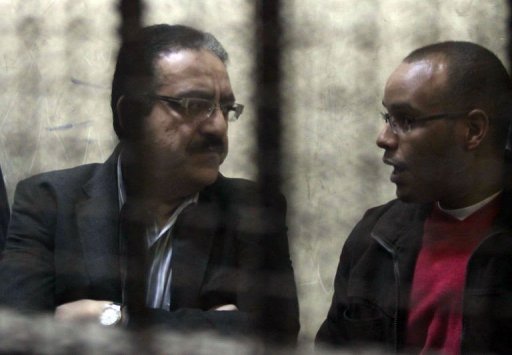 A trial that has strained ties between the United States and key ally Egypt opened on Sunday, with dozens of democracy activists including Americans charged with receiving illegal foreign funds.

A prosecutor in the court in a Cairo suburb read out the charges against the defendants, saying their alleged acceptance of illicit funds had “detracted from the sovereignty of the Egyptian state.”

They are also accused of operating their groups illegally.

Most of the 43 defendants did not show up in court. An AFP correspondent said the 14 defendants who did appear denied they had committed crimes when asked by the judge.

Each one answered the judge in Arabic, and one defendant told AFP during a recess that the defendants inside a black metal cage were all Egyptian.

After nearly one hour, the judge adjourned the trial to April 26 and the defendants who appeared in court were allowed to walk free until the next hearing.

“Down with military rule,” supporters of the defendants chanted in the courtroom after judge Mohammed Shukry adjourned the trial.

Judicial sources said that along with 19 Americans, the remaining defendants were Norwegian, German, Serbian, Egyptian, Palestinian and Jordanian.

An official with one of the targeted US groups, who requested anonymity, said that only seven of the American defendants are still in Egypt, the others having apparently left before a travel ban was imposed on them.

US legislators and Egyptian activists say the trial is politically motivated.

“Of course this trial is politicised. We proved during the investigation that we didn’t do anything,” one of the defendants, Islam Shafiq, told AFP after the hearing.

Shafiq works as a financial manager with the US-based International Centre for Journalists, one of the five foreign NGOs targeted in the case.

Several American suspects have sought refuge at the US embassy in Cairo, including Sam LaHood, son of US Secretary of Transportation Ray LaHood and head of the Egypt chapter of the International Republican Institute (IRI).

The other foreign groups in the trial are the US-based National Democratic Institute and the German Konrad-Adenauer Foundation.

A lawyer for some of the IRI defendants, Tawhid Ramzi, said the organisations were innocent and denied the sensationalist accusations carried by state newspapers, such as a plot to divide Egypt.

“These organisations did not aim to partition Egypt, nor conspire. They are paying the price for trying to raise awareness of democracy among Egyptians,” he said.

Egyptian citizen Nancy Okail, who heads the country’s chapter of the US-based democracy advocacy group Freedom House, said before the hearing began that she would be in court.

“I want to stand for this battle. I don’t think I have anything to hide,” she told AFP.

The United States, the main foreign benefactor of Egypt’s military rulers, has suggested that the trial of the activists may imperil that aid.

Washington provides about $1.3 billion annually in military aid to Cairo, in addition to development assistance.

The investigation came as the country’s ruling generals, who took power after an uprising overthrew president Hosni Mubarak a year ago, faced growing protests pressuring them to hand power to civilians immediately.

A senior US administration official said in the Moroccan capital Rabat late on Saturday that “intense” talks were under way to resolve the issue of the democracy activists.

“Intense discussions (are being held) with the Egyptians to try to resolve the situation within days,” the official said.

Some of the groups had helped to train activists and political candidates to campaign for parliamentary elections that began last November, in Egypt’s freest vote in decades.

Prosecutors, backed by police, raided the groups’ offices in December, confiscating equipment and sealing their doors.

In a visit to Cairo last week, US Republican Senator John McCain said he was told by military ruler Field Marshal Hussein Tantawi that he was working “diligently” to resolve the issue.

But political intervention in the case would belie the authorities’ claim they do not interfere with the independent judiciary, which already faces one of its greatest tests in the murder and corruption trial of ex-president Hosni Mubarak.