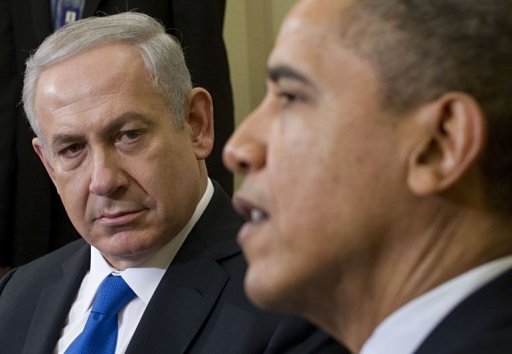 Israeli leader Benjamin Netanyahu left Washington Tuesday with assurances that the United States is prepared to take military action to prevent Iran from getting a nuclear weapon, just not yet.

Netanyahu, who met with President Barack Obama on Monday and Secretary of State Hillary Clinton on Tuesday, put the world on notice that his patience was wearing thin and, if necessary, he would launch unilateral strikes.

“As prime minister of Israel, I will never let my people live in the shadow of annihilation,” he told 13,000 delegates in a keynote speech on Monday night at the American Israel Public Affairs Committee (AIPAC) conference.

“Unfortunately, Iran’s nuclear program has continued to march forward. Israel has waited… for diplomacy to work, we’ve waited for sanctions to work. None of us can afford to wait much longer.”

Sitting alongside the president at the White House before going into talks on Monday, Netanyahu told Obama that Israel must remain the “master of its fate,” in a firm defense of its right to mount a unilateral strike.

Obama, who assured Netanyahu that he has Israel’s “back,” stressed that he sees a “window” for diplomacy with Iran, despite rampant speculation that Israel could soon mount a risky go-it-alone military operation.

While no one knows exactly what was said behind closed doors in the Oval Office, Obama publicly kept to a far more dovish line and appeared notably at odds with Netanyahu over just how immediate the Iranian threat is.

“This notion that somehow we have a choice to make in the next week or two weeks or month or two months is not borne out by the facts,” he told a press conference Tuesday.

He spoke after world powers responded to Iran’s new willingness to discuss the nuclear issue with an offer of talks, which Obama said would “quickly” show whether the Islamic republic was serious about avoiding war.

Obama, seeking a second term in November, argued that Iran was now feeling the “bite” of tightening sanctions though cautioned he did not expect a breakthrough in a first set of negotiations.

“This is not a game, and there’s nothing casual about it,” Obama said.

“We’ve had a very good visit in Washington, first in our discussion with the president in the Oval Office… and now culminating in this remarkable display of solidarity here in the Congress of the United States,” he said.

“I go back to Israel feeling that we have great friends in Washington.”

House Speaker John Boehner, a Republican, said: “The looming threat of a nuclear Iran cannot be ignored. Now is the time to stand together and we are here today to tell the prime minister that Congress intends to do so.”

The Obama administration says it does not believe Iran has taken a decision to develop a nuclear weapon, or that the time is right for military action, preferring to give biting new sanctions time to work.

But Israel, which sees a possible Iranian nuclear weapon as a threat to its very existence, claims Iran may be on the cusp of “breakout” capability — when it could quickly build a nuclear weapon.

In his speech to AIPAC, Netanyahu sought to minimize the differences between himself and the US president.

Obama “stated clearly that all options are on the table and that American policy is not containment,” Netanyahu said. “Israel has exactly the same policy.”