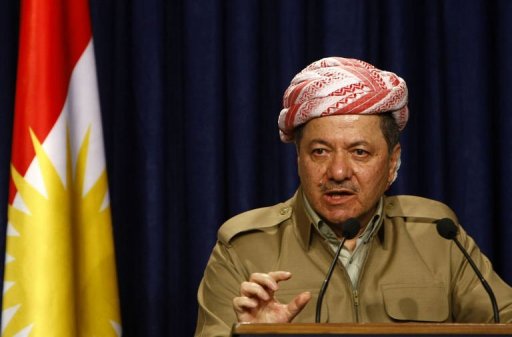 Kurd leader Massud Barzani hinted on Tuesday at a possible break with Iraq’s unity government, complaining that premier Nuri al-Maliki was monopolising power and building an army loyal only to him.

His remarks raised the rhetoric between his autonomous regional government in Arbil and the central government in Baghdad, with several key disputes festering between the two sides.

Barzani said the partnership that built a national unity government formed at a meeting he had hosted was now “completely non-existent and has become meaningless.”

“There is an attempt to establish a one-million-strong army whose loyalty is only to a single person,” Barzani, president of Kurdistan, said in a speech in Arbil, according to an English transcript.

He claimed that Maliki and the government were “waiting to get F-16 combat planes to examine its chances again with the peshmerga (Kurdish militia),” referring to a government order for 36 warplanes from the United States.

Barzani said that while he was committed to an alliance with Iraq’s majority Shiites, he was not committed to one with Maliki.

The premier has yet to appoint permanent ministers of defence and interior, more than two years after parliamentary elections.

Kurdish MPs hold nearly a fifth of the seats in parliament, and Barzani’s Kurdish Alliance bloc has five cabinet posts in the national unity government formed in November 2010.

Barzani continued: “We are committed to our alliance with the Shiites but not with this group of people who have monopolised power and with their policies have even marginalised other Shiites.”

“It is time to say enough is enough. The current status of affairs in unacceptable to us and I call on all Iraqi political leaders to urgently try to find a solution. Otherwise, we will return to our people and will decide on whatever course of action that our people deem appropriate.”

The central government and Kurdish regional authorities have been locked in protracted disputes over oil contracts with foreign oil firms and the status of a swathe of disputed territory around the northern oil hub of Kirkuk.

The Kurdistan region has signed around 40 contracts with international companies on a production-sharing basis without seeking the express approval of the central government’s oil ministry.

The national oil ministry, meanwhile, has awarded energy contracts to international companies on the basis of a per-barrel service fee. It has also refused to sign deals with any firm that has agreed a contract with Kurdistan.

Arbil also wants Kirkuk and the disputed tract of land to be incorporated into its autonomous three-province region, but officials in Baghdad have steadfastly rejected those demands.

That dispute is regarded by diplomats as one of the greatest threats to Iraq’s long-term stability.