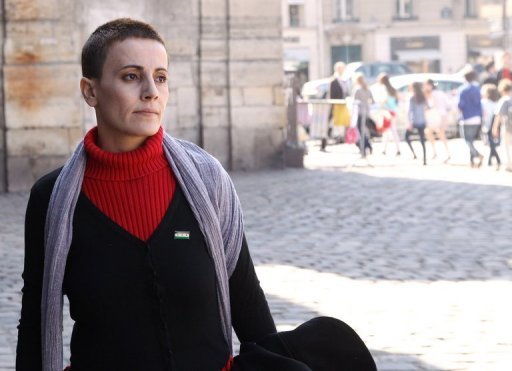 Fadwa Suleiman, an actress who became an icon of Syria’s revolution, is furious that her country’s peaceful protest movement has been drawn into armed conflict with the regime.

She said she is saddened to see that “the revolution is not going in the right direction, that it is becoming armed, that the opposition which wanted to resist peacefully is playing the game of the regime and that the country is heading for sectarian war”.

Her bitter assessment comes as she sits in a cafe in Paris, where she fled to last week after escaping from Syria.

“I didn’t want to leave Syria but I didn’t have the choice. I was being threatened and I was becoming a threat for the activists who were helping me,” she said wearily.

Suleiman became a high-profile member of the opposition movement last November when she appeared in footage from the rebel city of Homs that was broadcast on the Al-Jazeera television news network.

The 39-year-old actress, well known in her homeland for her work in theatre, films and television, belongs to the same Alawite religious minority as President Bashar al-Assad.

She says that a major reason for her participation in the protests was to do her bit to stop any slide into a sectarian war between factions of the Sunni Muslim majority, Alawites or Christians.

“Everyone was saying that salafist Sunnis were going to attack the Alawites,” she said. So, in Homs last November, “I, an Alawite woman, got up on the stage and declared that we were all united against the regime.”

Suleiman says that even before she publicly declared her opposition to Assad, she had for months been discreetly working with dissidents in Damascus and trying to persuade the Allawite-dominated cities Lattakia and Tartus to join the protest movement.

She stayed in Homs from November to January and then went back to Damascus, where she lived in hiding and put the fame she had garnered with her acting to the service of the revolution.

Suleiman said it was during her time in Homs that she saw that Sunnis who had initially carried weapons only to defend themselves, were starting to use these arms to attack regime forces.

“It was then that I understood,” she said.

“In the absence of a united opposition and of any real political proposals, and faced with an international community which is abandoning the Syrian people to the regime’s war machine, today they believe that the only way to make the regime fall is to take up arms,” she declared.

Suleiman said that in her own case, she had to get out of the country because she was being threatened all the time and her presence meant that other activists might get arrested.

“I was changing my hiding place all the time, I was changing my mobile phone, my Sim card, but each time the regime managed to locate me. The area would be surrounded and searched. I was becoming a danger for others,” she said.

After she finally left Damascus, she had to cross on foot into Jordan — a country she says is “full of Syrian spies”, and from there, with the help of the French embassy, made her way to Paris.

But even in France she says she does not feel safe.