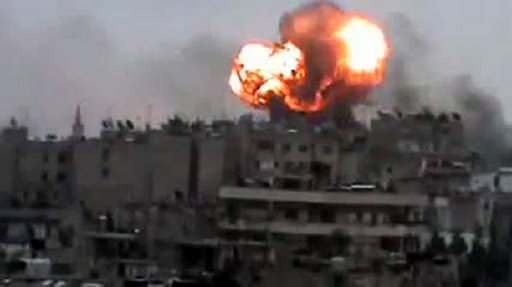 Syria’s regime declared on Saturday it has defeated those seeking to bring it down while reiterating support for a UN-Arab peace plan, as its troops reportedly shelled rebels in the city of Homs.

The opposition reacted by calling for outside powers to arm rebel forces, while the United States and Gulf Arab states urged international envoy Kofi Annan to spell out the “next steps” if Damascus failed to implement his plan.

Foreign ministry spokesman Jihad Makdisi, cited by the official SANA news agency, also said Syrian troops would only draw back from urban areas once the security situation is stable.

In Istanbul a day before a second “Friends of Syria” conference, the head of the opposition Syrian National Council said the gathering must back the arming of rebels.

“The Syrian National Council expresses the demands of the Syrian people,” Burhan Ghalioun told reporters. “We have repeatedly called for the arming of the Free Syrian Army.

“We want the ‘Friends of Syria’ conference to live up to this demand.”

Ghalioun called for “a change in the balance of power” after more than a year of violence.

Opposition figure Wadi Jamal, head of an SNC office which coordinates with rebels on the ground, said the Damascus announcement was timed to influence the meeting in Istanbul.

“The regime wants to send a message to the Friends of Syria that all is well and they have control of the situation, to break the morale of the revolution,” he said.

The United Nations says more than 9,000 people have been killed in the crackdown by forces of President Bashar al-Assad on an Arab Spring-inspired uprising that began a year ago with pro-democracy protests.

“The battle to topple the state is over, and the battle to solidify stability… and move on towards a renewed Syria has begun,” Makdisi said in an interview originally carried on state television.

Troops would only withdraw from residential zones once they were secure, he said, adding UN-Arab League envoy Kofi Annan acknowledged there were “illegitimate armed elements within the opposition.”

“The presence of the Syrian Arab army in Syrian cities is for defensive purposes (so) as to protect the civilians,” he said. “Once peace and security prevail, the army is to pull out.”

In Riyadh, meanwhile, US Secretary of State Hillary Clinton and her Gulf Arab counterparts urged Annan “to determine a timeline for next steps if the killing continues” despite Syria’s acceptance of his six-point plan.

On the ground, at least 32 people — 24 of them civilians — were killed in violence nationwide on Saturday, the Syrian Observatory for Human Rights said.

Annan on Friday appealed for an immediate ceasefire, even as monitors said at least another 39 people were killed.

The Syrian Observatory said a child was killed on Saturday by rocket fire in the Bayada area of Homs.

Clinton’s talks in Riyadh came ahead of Sunday’s “Friends of Syria” forum in Istanbul which ministers from dozens of Arab and Western countries are due to attend.

But there are differences over how to help the Syrian people in their bid for democracy.

Saudi Arabia and Qatar have called for arming the opposition, which includes the Free Syrian Army made up of Syrian military defectors.

Saudi Foreign Minister Prince Saud al-Faisal said on Saturday in Clinton’s presence that “arming the opposition is a duty,” despite the opposition of Washington and other Western and Arab states to the idea.

The United States and Turkey have agreed on the need to provide communications and other non-lethal aid to Syria’s opposition.

An Arab League summit in Baghdad this week rejected the option of arming any side, and urged all parties to engage in a “serious national dialogue.”

The Iraqi premier’s spokesman said on Saturday his country may not attend the Istanbul conference as it wants to maintain its ability to mediate.

On Friday, Clinton discussed with Saudi leaders efforts to send more humanitarian aid to Syria, and support opposition efforts to present a united and inclusive political vision for the future.

They also discussed tightening sanctions on Syria, a US State Department official said.

Asked about internal opposition divisions, Ghalioun said: “This is not the case, we are on the path to reunification… We are more unified than the international community, which has to live up to its responsibilities and close ranks.”

The United Nations is making plans for a Syria ceasefire observer mission if hostilities halt.

Syria has agreed to admit a UN team of experts to examine the conditions for deploying the mission, Makdisi said on Saturday.

Annan’s peace plan calls for a commitment to stop all armed violence, a daily two-hour humanitarian ceasefire, media access to all areas affected by the fighting, an inclusive Syrian-led political process, a right to demonstrate, and release of arbitrarily detained people.