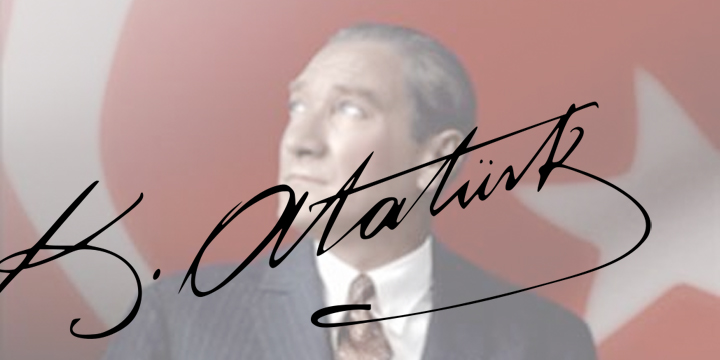 Ever-present in modern life, typefaces have sparked lawsuits, influenced business decisions and even inspired films and books. In Turkey, a typeface has now become a political symbol, downloaded from the Internet en masse and written about in the national media.

The computer font that has attracted so much attention is derived from the handwriting of Mustafa Kemal Atatürk, the founder of modern Turkey, whose secular legacy many feel is being threatened by the country’s Islamist-rooted ruling party. A businessman in the western Turkish city of Bursa, Murat Özbalci, commissioned a Texas company to design the font based on samples of the late leader’s distinctive cursive flourishes.

Özbalci calls the Atatürk font a “gift to citizens” in honor of National Sovereignty and Children’s Day, a public holiday on April 23 that commemorates the establishment of the Turkish parliament in 1920, while Turks were fighting a war of liberation from the Western powers that had divided up the Ottoman Empire. Özbalci released the typeface last week, offering it for free download from the website of his company, Artikel, an enterprise that produces and exports stickers and wall decals. Within just days, dozens of other websites had made the font available, with tens of thousands of mentions of the font coming up in Internet searches.

“Directly from my site, about 50,000 people downloaded the font in two days,” Özbalci said, estimating that at least three times that many people had obtained the font from other sites. “My hope is that 1 million people will use the font.”

Extraordinary as it may seem, the Atatürk font phenomenon can be understood within the context of Turkish history. A military commander in the War of Independence, Mustafa Kemal – who later took the surname Atatürk, or “father of the Turks” – established the Turkish Republic in 1923 upon the ashes of the Ottoman Empire. As Turkey’s first president until his death in 1938, he initiated sweeping reforms that changed the very face of Turkish society, reducing the visibility of religion in public life and modernizing and Westernizing the country. Among the far-reaching changes, the Caliphate and sharia law were abolished, the Arabic script was replaced with the Roman alphabet, and the men’s fez and women’s veil were prohibited.

Turks’ reverence for Mustafa Kemal, who is widely viewed as the savior of the nation, appears to know no bounds. From the beginning, the Turkish state encouraged a personality cult around the leader, endowing him with a larger-than-life persona that remains omnipresent today: His picture hangs in every government office, his image is on every piece of currency, and his sayings and speeches are memorized by schoolchildren across the country. A law that has stood unchanged since 1951 makes “insulting the memory of Atatürk” a criminal offense punishable by up to several years in prison.

Yet today, many Kemalists fear that the conservative Justice and Development Party (AKP), which came to power in 2002, seeks to scale back Atatürk’s progressive legacy. Prime Minister Recep Tayyip Erdogan, whose wife wears a headscarf, is widely perceived to have an Islamist agenda at odds with a secular, pluralistic society. Erdogan angered many earlier this year when he remarked that a reorganization of the educational system then being debated in parliament was aimed at raising a “pious generation.” The most contested element of the education overhaul, which was later passed into law, lowers the age at which children can attend religiously-oriented “imam-hatip” schools from 15 to 11.

With Kemalists feeling under threat, it’s no surprise that Atatürk-inspired memorabilia, whether in the form of cell phone cases or Facebook fan pages, have become increasingly popular among ordinary citizens who identify with the founding father. Recent years have seen a rising trend of Turks getting inked on their forearms with tattoos of the iconic “K. Atatürk” signature or images of Mustafa Kemal’s stern profile.

Özbalci insists he did not have a political agenda in creating the Atatürk font. “I am not a political guy; I am just a regular person. I am a patriot and I love my country. We owe many things to Atatürk. He made our country free,” he says. Regardless of Özbalci’s stated intentions, the polarized political atmosphere in Turkey makes the Atatürk font a symbolic salvo in the ongoing societal battle over the direction the country is headed in.

Reactions to the font in the Turkish media were clearly divided along ideological lines. Staunchly secular publications jumped on the news, with two such national newspapers, Vatan and Cumhuriyet, as well as private news channel NTV, putting up zip files of the font directly on their websites. In contrast, the conservative and Islamist press ignored its existence entirely. The centrist newspaper Habertürk both covered the font as a news item and ran an opinion column by conservative historian and columnist Murat Bardakçi that criticized it as unnecessary.

And what of the Fort Worth, Texas-based company, Signfonts.com, that designed the Atatürk typeface? Özbalci didn’t reveal to owner Steve Contreras that the handwriting was Atatürk’s until after the font was finished. Because Contreras doesn’t know Turkish and wasn’t aware of the identity of the writer, he was entirely unprepared for the attention it has drawn.

“After I designed the font, Murat Özbalci wrote me and told me that it was a Turkish hero. I really wasn’t even aware that it was a big deal,” he said.

In Turkey, sometimes a font is not just a font.