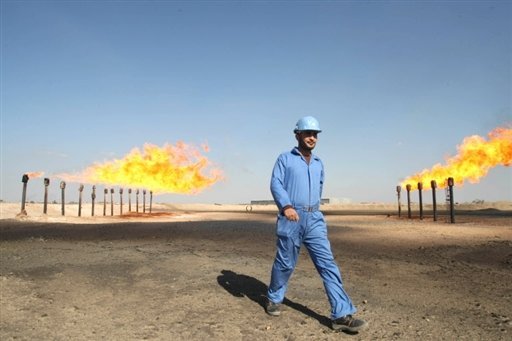 The semi-autonomous region of Kurdistan halted oil exports to the rest of Iraq earlier this month, deepening the bitter quarrel over the sharing of energy proceeds. Claiming that the central government in Baghdad owes it $1.5 billion in revenues, Kurdistan’s move threatens to further divide an already fragmented country in dire need of economic growth.

â¨Oil is pivotal to Iraq’s economy, accounting for over 90 percent of government revenues. In February alone, oil brought in $6.6 billion, but the political turmoil engulfing the country, including the high levels of violence since American troops left last December, has detracted foreign investors and created a hostile environment for development.

â¨â¨Regional frictions have failed to resolve oil production share agreements that investors are seeking. Government incompetence and corruption are preventing any real economic development from taking place. Analysts warn that if ordinary Iraqis fail to see improvements in their living standards, they may resort to violence as a way to vent their frustration.

â¨â¨“Iraq needs to develop its economy as a means of enhancing security,” says Raad Alkadiri, Head of Global Risk at PFC Energy, a global consultancy firm for the oil and gas industry. “In the past we’ve seen provincial unrest due to a lack of infrastructure and the sense that the government isn’t spending money wisely, or at all, which has exacerbated political divisions and bred hostility on a local level.”

Iraq’s oil output has greatly increased since the 2003 U.S.-led invasion, and in March produced on average 2.3 million barrels a day, up from 2 million in February. Yet, the average citizen has barely benefitted.

“Iraq’s economy hasn’t become more efficient since 2003. The state hasn’t managed to deliver and there is no difference for ordinary Iraqis,” says Toby Dodge of the London School of Economics, and fellow at the International Institute for Strategic Studies. “There are enormous pressures on water supplies, the education system is in a perilous state, and poverty is widespread.”â¨â¨

Government efficiency is particularly poor in a state that effectively has to rebuild itself after nine years of war, says Alkadiri. Politicians are focused on security issues and short-term battles for power rather than building economic strength. In particular, Alkadiri points to President Nouri al-Maliki, who he says “has never shown a deep understanding of the importance of the economy.”

â¨â¨A deficit of well-trained bureaucrats has severely hindered the country’s progress as well, says Stephanie Sanok, a senior fellow at the Centre for International and Strategic Studies. She believes that those running the show generally lack the basic skills of managing and investing. She attributes the breakdown in services, welfare and pipelines to the fact that the infrastructure is simply not equipped to deal with the demand. “The government is just not making the right sequence of infrastructure investments,” she says.

Any development is largely restricted to the capital, bypassing rural areas. “Iraq is a precariously weak state that’s got a very low capacity. The further you get from Baghdad, and importantly near the major oil deposits in the south, people are very poor and it’s not improving,” says Dodge.

Aside from poverty and fraying infrastructure, the prolonged lack of a hydrocarbon law is hampering growth. Alkadiri rattled off a list of challenges to achieving such legislation: “federalism, national reconciliation, power-sharing.” Because the economy is predominantly state-run, politics seep into everything, which can discourage foreign investors, especially during the current political crisis. Short-term political maneuvering is exacerbating older sectarian and regional divides, and much-needed stability looks a long way off.

The refusal of the main opposition bloc, al Iraqiya, to accept America’s proposed ambassador on the grounds he is too close to Maliki demonstrates the turmoil in Baghdad. The refusal of Kurdish authorities to hand over Vice President Tariq al-Hashimi, who fled there after an arrest warrant was issued on terrorism charges, illustrates how the two regions continue their tug-of-war over sovereignty. This environment has made it difficult for businesses to function.

Oil giant Exxon Mobil’s contracts with the semi-autonomous Kurdistan Regional Government, signed last October, have been declared illegal by Baghdad and remain an issue of contention. Last week the central government declared Exxon excluded from May’s energy auction. Under the federal constitution all oil revenues must be directed through Baghdad and then distributed. The Kurds are entitled to 17 percent, while they make up roughly 12 percent of the overall population.

“The recent discord between Baghdad and the Kurds has been troubling for foreign investors – particularly oil companies that want contracts in Kurdistan,” says Sanok. “The regional tensions will only be exacerbated as the economy stalls, particularly from the oil perspective, which worsens the security implications,” she adds.

“The reality remains that in the Sunni areas there are less resources than in Kurdistan and the south,” Alkadiri says. “As politics test the integrity of the state and tests the robustness of the state – that resource issue is going to be highlighted.”â¨â¨

The regional differences are startling, according to Sanok. “In Kurdistan they have greater stability and security so you see greater investment and the people are seeing the benefits of the oil economy, like with tourism and small businesses, whereas in Basra they manage resources differently and the money doesn’t trickle down.” Resentment over such matters is a major factor in preventing serious talks about oil sharing laws.

â¨â¨Improving security is vital for encouraging foreign investment, creating a more efficient and secure economy, and maintaining the goodwill of the Iraqi people, says Dodge. At the moment, even companies “used to investing in dictatorships” are wary of working in Iraq.â¨â¨

In theory, the country is ripe for investment because it needs complete rebuilding. A recent Iraqi government survey estimated the country required two million new housing units, though Alkadiri says “there isn’t a sector in Iraq that wouldn’t be a perfect venue for investment.” There are small signs of progress, like the recent completion of a shopping mall in Baghdad, but these are only pockets.â¨

Even wealthy Iraqis are reluctant to invest in their country. The elites “import a lot of goods and don’t give a jolt to the local businesses,” asserts Sanok.

With a decimated middle class who either fled under Saddam Hussein and haven’t returned, or who have lost money in the last nine years of war, there is scant consumer demand and the private sector is struggling to grow.

â¨â¨Iraq has a tremendous amount of revenue thanks to its oil, and if utilized such income “could boost economic activity greatly, and be a massive focus of investment,” Alkadiri says. But at the moment Iraqis face another summer of choppy services, while the government faces growing discontent.

â¨â¨Looking ahead, the growth of the Iraqi economy hinges on the political will for bipartisanship and a focus on long-term issues.

“Then you could start to see the economy shifting and this would allow for the strengthening of key institutions,” Alkadiri says. But he’s pessimistic. “The most likely view is that the country will muddle through on a gradual downward trajectory.”

How long the Iraqi people will stand for it, is uncertain.