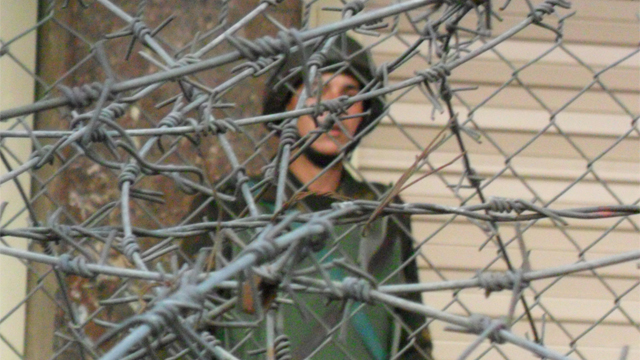 “Should a commander or administrator not be held to account for the actions and inaction of his soldiers and officials?” asks Ahmed Tarek Bahgat Abaza.

Let us start with the position that a state’s institutional structures are strictly to serve their citizens; if justice, human rights and participatory democracy are in the definition. The production and sustainment of processes leading to a sense of justice and responsibility are primary functions. But Egypt cannot yet achieve the simple justice of investigation, the right to question and to call to account.

Hosni Mubarak’s historic declaration announcing his abdication in 2011 and read by his Vice President Omar Suleiman empowered the Supreme Council of the Armed Forces (SCAF) to “manage or administer” the “affairs of the country”. What they are obligated to provide is an administrative service because it is done for an entity responsible for a populace. The SCAF are servants to the people; and servants receive orders from their masters and so they are to be called to account, in principle and, normatively, in practice. The SCAF themselves insist political and administrative legitimacy comes only from the populace.

As administration here is a service, as it is done for the state, the right to question all action, or more importantly, inaction, rings with our sense of justice and its accompanying call to responsibility. The 25 January revolution demanded the fall of the regime or system but the throne was given to the Minister of Defense and Military Production Field Marshal Mohamed Hussein Tantawi, perhaps the most important minister of the system. Members of the ruling council over which he presides have not been subject to any investigation as Mubarak’s penultimate Prime Minister Ahmed Nazif and other regime figures have been. His and his council’s period of service included presiding over several massacres worthy of the commendation of the most enthusiastic dictator. In the case of serving Egypt, one mistake is more than enough – yet a massacre?

The list is long and ongoing: the Maspero and Mohamed Mahmoud incidents. The Cabinet and Parliament incidents. The Defense Ministry slaughter – literal slaughter that was allowed to happen before highly effective and forceful dispersal of protesters. If Egypt’s army can demonstrate such efficiency why were the thugs who drowned the streets with blood not dispersed or arrested at any level worthy of mention?

I went near the Ministry of Defense not to demonstrate but to find and remove from the scene a friend injured by rubber bullets in his ankle and back and by a rock on his head. On the Friday that followed he was beaten with batons on his back and the injuries; well, let us just mention that it was a group beating one slightly built young man. With no beard and no membership in a political body his goal was “sending a message to safeguard Egypt’s future” – directly to the rulers in front of their house. He swears whilst crying that the first rock thrown in clashes that erupted came from the soldiers and insists his friends and he never wanted to storm the ministry – as the official media often claims.

He considers it to be stupid to imagine protesters would actually attempt such an impossible act but of course he speaks only for his friends and himself. In his eye witness account the most dramatic moment was seeing a bearded man having his throat slit.

This is a part of the story he weeps along with.

It should not be cheap to kill or to formally supervise killings. That is, to stand in a formal position of administrative responsibility aware of the killings and failing to prevent them. One case of death or injury or one case of failure to protect a public event is enough, more than enough, for investigation to begin in earnest. But the system is a political system and politics is a game of interests. It is not in the SCAF’s interest to be questioned about any of this – at any time. They are not to allow oversight of their activities and decision-making, most especially financial supervision or control. The armed forces’ budget includes the profits from pasta and mineral water production, petrol stations, residential apartments, land, farms etc… along with some weapons production. Their, better, our soldiers work in their factories and shops with their wage given to them to work as soldiers.

Blood and food – what more reasons to call to account?

Why were numerous soldiers stationed at two points nearby standing silent as a man shot at protesters from above at the cabinet incident (December 2011) and at my head, at one point with a bullet flying through my hair? I impulsively asked one soldier who guarded the American embassy nearby, “Hey do you know who is shooting above there?”

I said goodbye and left to see the injured at the makeshift hospital, having to run rapidly to escape the possibility of being shot at and hearing directly from the doctor that live bullets have been used, having already seen a sample and recorded the image.

Let us assume here Field Marshal Mohamed Hussein Tantawi, de facto ruler of Egypt, never gave an order to shoot at protesters and never neglected to see to security matters presented to him. But what of the rest of his council and its government? We cannot extend this assumption to any more than the ruler because it is difficult to imagine that no one in the political structure is guilty of such when the structure was itself clearly negligent: inaction in Port Said at a soccer game when over 70 youths were massacred (February 2012) – a refusal to open doors for the young men and boys to escape, a slow, to be polite, security response and a gap in the line of soldiers that allowed the thugs to pass, running to the same target, some carrying the same weapons, of matching colors! And then the dark: the crime of turning off all the stadium’s lights as the butchers did their job.

Would a parent not be responsible for the criminal actions of his minor child? Or his dog’s bite? So should a commander or administrator not be held to account for the actions and inaction of his soldiers and officials?

So many of the faces I see in Egypt are drained, hands dry, skin wrinkled, clothes worn out, feet walk on dirt and in dirty shoes and sandals if at all. This is especially when you go to the Egypt where the impoverished majority live.

The SCAF has the audacity to complain publicly that they have ‘suffered’ and withstood with dignity and ‘self-control’ the hurt feelings from accusations and ‘false’ attributions – do they not know criticism is the game in democratic politics? The SCAF is the most evil entity in the Egyptian socio-political game today. This is not just because their soldiers or other security personnel for which they are responsible, have killed, tortured or mistreated people, which is well-attested to, even during the 2011 initial uprising (as an Amnesty International report documents). It is not just because they supervise murder in their capacity as administrators of the country; but let us assume again some innocence: are they not at the very least the ones responsible for ensuring security and protecting lives? There is what is called gross negligence or fault by omission.

Are they not responsible for cleaning the streets?

I see the burning rubbish on both sides of the highway in the Nile Delta and Nile Valley – on both sides of almost every irrigation canal. Someone has chosen to let burn more than rubbish but as if it was rubbish – a person, a society. Someone, let us not dare repeat the name I wrote above, is willing to let die. Simple justice – we yearn. The simple act of questioning, the beginning and end of all philosophy, the right to call to account is limited and those willing to let die are immune. Negligence and maladministration are not being summoned to the investigative agenda. Crimes themselves are on the run.

But justice is absolute if it is an ideal to strive for and the path to it is relative and lived. This path must be taken under all conditions without exception. Again and again, all rights enshrined in United Nations and other international conventions signed by Egypt, and in Egyptian law itself, must be implemented without exception. Writing is not only for a page, a convention, a wall or a screen. Writing is lived experience on the streets as one reads one’s life and walks the step. The step along the path to implement.

Ahmed Tarek Bahgat Abaza is an Egyptian writer, scholar and musical composer. He has written for several publications and is currently researching on the Philosophy of Biology for the Rutherford Journal. Abaza composes under the name Ola-abaza.

The views expressed in this article are the author’s and do not neccessarily reflect those of Your Middle East.