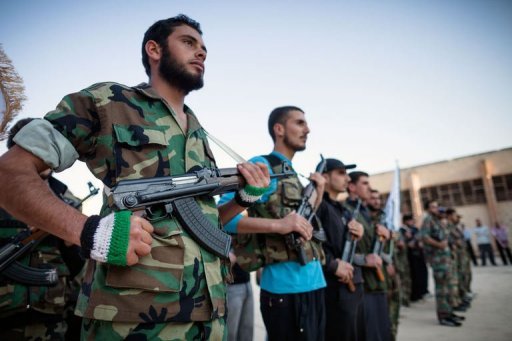 He told both the Syrian government and opposition that there was only a “brief window” to avoid civil war.

Mission chief Major General Robert Mood was in the convoy but escaped unharmed along with 11 other observers and his spokesman, Neeraj Singh, an AFP photographer travelling with them reported.

The bomb, apparently planted underground, exploded after the passage of four vehicles carrying the UN team, hitting the troops travelling behind them, the photographer added.

The blast hit as the convoy entered the city of Daraa, south of Damascus, cradle of a 14-month uprising against President Bashar al-Assad’s regime. Thousands of people have been killed in the ensuing crackdown.

“This was a graphic example of what the Syrian people are suffering on a daily basis and underlines the imperative for all forms of violence to stop,” Mood said in a statement.

Members of his team were checking on the condition of the wounded soldiers, the Norwegian general added, wishing them an early recovery.

In New York, Ban warned that such bombings cast doubt on the future of the mission set up to monitor a truce brokered by UN-Arab League envoy Kofi Annan that officially started on April 12 but has not been heeded.

The attack was “a testament to the difficulty and the danger” of the UN mission, the UN chief told the UN General Assembly.

It highlighted an “alarming upsurge” of roadside bombs, alongside government attacks and was “a blunt reminder of the risks of violence escalating even further”, he added.

Both sides “must realize that we have a brief window to stop the violence, a brief opportunity to create an opening for political engagement between the government and those seeking change,” he warned.

If the violence did not stop, Ban said he feared “a full-scale civil war with catastrophic effects within Syria and across the region.”

In a statement released earlier Wednesday, he said there was no immediate evidence that the UN military observers were the target.

US State Department spokeswoman Victoria Nuland said the blast was “further evidence that the ceasefire is not holding and we really have to continue to pressure the Assad regime and all actors”.

The opposition Syrian National Council accused the regime of being behind the blast.

“We believe the regime is using these tactics to try to push the observers out amid popular demands to increase their numbers,” SNC executive committee member Samir Nashar told AFP.

In other violence, 11 people were killed across Syria, including civilians and members of the security forces, the Syrian Observatory for Human Rights said.

Security forces also carried out arrest raids outside Damascus and in Deir Ezzor province in the northeast, the Britain-based watchdog added.

The Observatory said that almost 12,000 people, mostly civilians, have been killed in Syria since March last year. About 800 of them have died since the UN-backed truce was supposed to have taken effect, it added.

The watchdog accused the authorities of forcing into exile “thousands of young men” from the Mediterranean coastal city of Banias, among the first to rise up against the regime.

“The intelligence forces target the young men, threatening to arrest them and their wives on charges of supporting the uprising,” it added, saying nearly 5,000 had fled “for fear of being arrested, tortured and killed.”

Annan told the UN Security Council on Tuesday the priority in Syria was “to stop the killing,” and expressed concern that torture, mass arrests and other human rights violations were intensifying.

Annan plans to visit Damascus for a second time in the coming weeks, his spokesman said, though this depended on events on the ground.

The envoy said the current observers on the ground “have had a calming effect” and the deployment by the end of the month of a 300-strong team would see a “much greater impact.”

A statement from the mission said 113 staff — 70 military observers and 43 civilians — were already on the ground.

But Turkish Prime Minister Recep Tayyip Erdogan has urged the UN to bolster its mission to as many as 3,000 — well past the 300 authorised under a Security Council resolution.