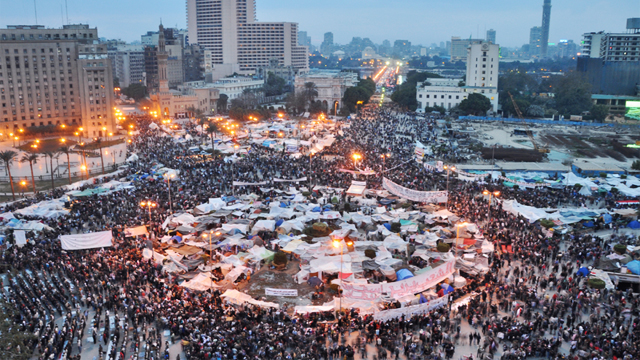 Public Squares in the Arab uprisings, and in the rise of protest movements around the world, were placed at the forefront of dissent and social change. Historically, this is not a new development. Many of the most important moments in history have coalesced around Public Squares.

On 19 January 1969, the Prague Spring was sparked by Jan Palach’s self-immolation in Prague’s Wenceslas Square in reaction to the Soviet invasion. The events of Tiananmen Square in 1989 is another prominent example. There are many more.

The 25 January 2011 was National Policy Day, a national holiday. On this day, activists planned demonstrations across Egypt, including twenty locations around Cairo. One of the most remarkable aspects of the gathering of the hundreds and thousands of people in Tahrir Square was that the march to Tahrir was not planned. Violent clashes with police resulted in people converging on Tahrir to seek protection in numbers. The density of people establishment the Tahrir Square phenomena and a political public space was formed by protestors. The political activation of Tahrir Square enabled the space to facilitate overthrow of the Mubarak regime. Protestors remain in Tahrir Square to this day to push for political change in Egypt.

On the 18 March 2011, the Bahraini government destroyed the Pearl Monument, an elegant structure built to celebrate the third summit of the Gulf Cooperation Council in 1982. The activation of the Pearl Roundabout occurred on February 16 when protestors moved in with tents, in a deliberate emulation of the protestors in Tahrir Square. The square is now sealed off by the government and has been cleared of protestors. The brutality of the regime’s response is embodied in the images of the broken tusk like arches of the Pearl Monument collapsed on piles of rubble.

On the 22 August 2011, the Libyan rebels captured Green Square and marked the end of the Qaddafi regime in full view of global media. The death of the Qaddafi regime, led the new government to rename the square to Martyrs’ Square. At the start of the uprising in Libya, YouTube videos circulated of anti-Qaddafi protestors in Green Square burning images of Qaddafi and people holding signs renaming the Green Square as Benghazi Square. Green Square would not emerge as a site for anti-regime protesters, as it did in Tahrir however. This was a revolution of cities – Qaddafi’s Tripoli vs. the rebels’ Benghazi – not squares. Qaddafi pushed his supporters into Green Square to show the world the support for his regime – or at least a semblance of support – and made his declarations to ‘burn Libya’ if the revolt against his regime did not stop. Green Square is no more.

Freedom Square outside Sana’a University emerged as the focal point of protests against Ali Abdallah Saleh. The Gulf Cooperation Council (GCC) pushed Saleh to be removed from power and then promoted policies of stability, a policy supported by the US and the broader international community. There is a fear by the GCC that Yemen could descend into chaos, but equally the calls for good governance is a threat to the Gulf monarchies. However, the desire for change in Yemen is strong and led protests to change the name of Freedom Square to Change Square. Protestors remain in their tents in Change Square despite the removal of Saleh as they continue in their calls for change and not stability.

The spark of the Arab uprisings did not occur in a public square but in the middle of a street. Mohammad Bouazizi’s self-immolation provoked large protests against the Ben Ali regime outraged at his suicide. Avenues, rather than Public Squares, were the epicentre of protests in Tunisia. In Tunis protestors utilised the central avenue Habib Bourguiba to launch their uprising. The main public square in Tunis, however, has now become the official marker of the revolution. Previously named November 7 Square, the day Ben Ali took power, it has now been renamed Mohammad Bouazizi Square.