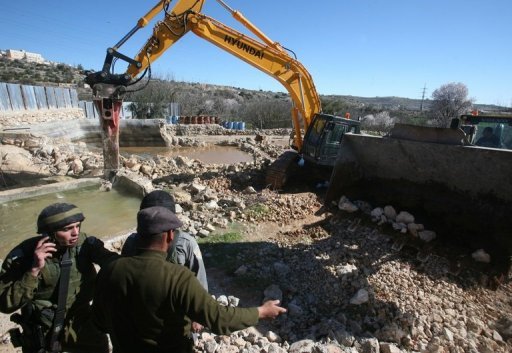 Israel demolished dozens of Palestinian homes, water cisterns and farm buildings built with European funds in 2011, and over 100 such structures are at risk, aid groups said in a report on Monday.

The figures, compiled by a group of local and international NGOs chaired by the UN Office for the Coordination of Humanitarian Affairs (OCHA), were published just ahead of a meeting of EU foreign ministers in Brussels.

The report from the Displacement Working Group (DWG) said Israel razed 62 European-funded structures last year, and another 110 such projects were at risk.

The DWG said that affected structures were financed by France, the Netherlands, Britain, Poland, Ireland and the European Commission.

France last month protested to Israel’s ambassador in Paris over the demolition of two water cisterns in the Hebron area in the southern West Bank, which were financed under a French agricultural cooperation project.

OCHA says that a total of 620 structures in the Israeli-occupied West Bank were torn down in 2011, of which 62 were European-funded.

Of those affected, 600 were in the Area C zone of the occupied West Bank where Israel has full civilian and security control. Twenty of the demolitions were in Area B, where Israel and the Palestinian Authority have joint responsibility.

The Israeli military body in charge of civilian aspects of life in the West Bank says it is obliged to issue demolition orders against structures erected without the required construction permits.

But Willow Heske, spokeswoman for UK charity Oxfam, told AFP that the permit regime “is discriminatory and is in contradiction of international law.”

“In our experience trying to work within the permit regime, it can sometimes take up to two years… just to get a denial,” she said.

“We see that settlers are getting zoning and building permission in these areas with no trouble, this is obviously discriminatory and is in contradiction of international law.”

The aid groups who compiled the report called on the EU to take action.

“Aid from the international community, including European governments, is wasted when aid-funded projects are demolished,” Oxfam’s country director Nishant Pandey said in a statement accompanying the data.

“European governments can ensure that their citizens’ money is going for good by calling on the government of Israel to end the demolition of aid projects and civilian infrastructure in Area C,” Pandey said.

“The EU must take a stand on ensuring respect for international humanitarian law, so that Palestinians can develop their communities,” the organisation’s Deborah Casalin said in the joint statement.

“Member states should systematically monitor and report any impediments to aid delivery, and demand reparation.”