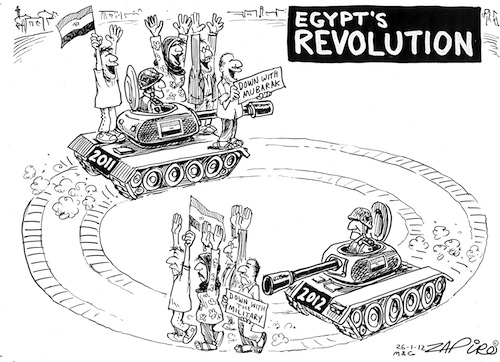 “It is impossible to dispel the looming shadow of the tragic events in 1991 when Algeria’s transition hit the patrolled borders of military-led ‘democratisation’,” writes Nour Bakr in a historical analysis.

As a predictably low turnout of Algerians took to the polls recently, the foregone result of an FLN victory was simple testimony to a political system dominated by its military elite. And yet in Egypt, where under similar circumstances the country’s military council still so pervasively runs proceedings, there is much expectation and optimism. Egypt’s categorisation as an ‘Arab Spring’ country is partly to blame, narrowing comparisons to the few other uprising nations. Algeria itself is yet to join this grouping, its recent history propelling onto a different trajectory to that of its close neighbours. And yet, remarkably its plight is much closer to that of Egypt than say, Libya, where the ruling infrastructure was almost entirely swept away.

Progress in Egypt has become a somewhat subjective term. Amidst the chaos, insecurity and upheaval of last year’s uprising, the only true constant has been the country’s de facto rulers, The Supreme Council of the Armed forces. A mainstay of the Mubarak regime, Egypt’s military council has arguably been the primary benefactor and indeed instigator of Mubarak’s fall. Tellingly, there are scant few optimists left who would argue whole-heartedly that what took place last February was not a small-scale military coup. In the run up to what is being portrayed as Egypt’s first truly free presidential elections, there remain serious questions over the role of this military junta conducting Egypt’s stagger towards democracy.

When in 1991, the populist Islamist party (FIS) won the first round of elections in Algeria, the military swiftly intervened, cancelling the election, reasserting its control over government and banning FIS. It was in many ways the culmination of a superficial process of democratisation helmed by the country’s ruling party which in itself was and still is largely a front for the country’s military elite. This ‘gated democracy’ is the closest parallel for Egypt’s current political stage, however Egypt’s rulers have taken note of their neighbour’s tumultuous recent history. Rather than taking the bold and dangerous step of trying to directly dictate the outcome of the country’s parliamentary elections in November, SCAF took a step back and allowed an Islamist victory in the knowledge that its effectiveness in Egypt’s presidential system would be severely limited. This shrewd move, allowing truly open elections, succeeded in fooling many that the military’s transitional roadmap was both genuine and the most stable route.

Egypt’s presidential election, due to take place this week, will be the most important indicator of the extent to which SCAF can and is willing to control the limits of Egyptian democratisation. However, thus far there are few signs of encouragement. A report this week by The Egypt Independent claimed that SCAF will issue a constitutional declaration giving the president power to dissolve parliament. If true, the move would represent a deliberately timed move by SCAF to influence the immediate future of Egyptian politics in its favour. Such an announcement two days before the country’s presidential election leaves little time or space for opposition to the measure. The constant delays in the writing of the constitution until after a president is elected grant SCAF a powerful precautionary measure in the event that the future leader’s position threatens their political existence.

A scenario reminiscent of Algeria’s annulled election is unlikely to occur largely because Egypt’s Military Council has been busy trying to ensure a favourable result, before the election.

Two polls published recently in the state-owned, Al-Ahram newspaper, put Amr Moussa and Ahmed Shafiq in first and second place respectively. The candidacy of Shafiq, who served as PM under Mubarak, has garnered much controversy. The electoral commission’s brisk U-turn on its decision to disqualify Shafiq remains highly suspect. The ruling completely undermined a recent law established by parliament which barred anyone who had served as vice-president or prime minister under Mubarak, the grounds on which he was initially disqualified. Predictably no such reversals were made on the decision to disqualify the Muslim Brotherhood’s first choice candidate or the popular Salafi preacher Abu Ismail, both of whom would have almost certainly provided a strong challenge to the military’s candidate.

Of the 3 frontrunners, Moussa, Shafiq and Fotouh, only the latter has taken a stance and rhetoric which Egypt’s revolutionaries could at least begin to identify with. There are of course other more radical candidates such as Khaled Ali who this week campaigned with protesters against continued military rule and the detention of activists. However they simply cannot entice the Islamist or military vote as long as candidates more clearly delineated along these election-winning lines are present.

A Shafiq presidency would be yet another crushing indication of the derailment of the Egyptian revolution. Aboul-Fotouh will very likely become the anti-regime candidate by default, however there remains some vagueness about his position on the role of the military. Bassem Sabry, a prominent Egyptian writer, this week described Fotouh’s position regarding SCAF as becoming more and more confrontational. However for many who watched the historic presidential debate between Fotouh and Moussa, his position was at best pragmatic. Unfortunately it is becoming increasingly evident that such pragmatism will be necessary if he is to defeat his two opponents, both of whom are vastly experienced politicians.

An Islamist victory would undoubtedly unsettle SCAF. The watered down rhetoric of the likes of Abou Fotouh can be in part attributed to the same political pragmatism which allowed the Muslim Brotherhood to take Egypt’s parliament by storm. Nevertheless a popular president, with even a modicum of backing by the revolutionaries, could in the context of Egypt’s still unsettled state, provide a serious threat to SCAF’s grip on the country’s seat of power. On the eve of what promises to be a pivotal day, it is impossible to dispel the looming shadow of the tragic events in 1991 when Algeria’s transition hit the patrolled borders of military-led ‘democratisation’.