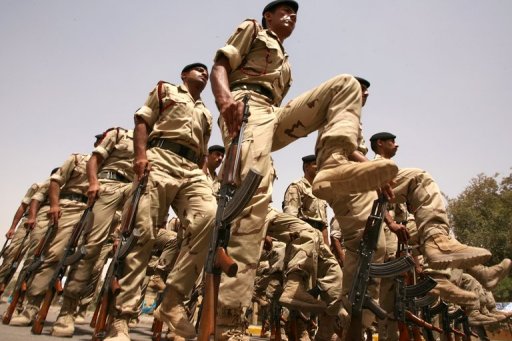 Iraqi MPs are toying with a Saddam-era policy they hope will combat both high unemployment and fears of sectarian divisions in a country that was on the brink of civil war a few years ago: conscription.

The nascent proposal is a potentially divisive one, and may face opposition in the Kurdish north and mostly Shiite south — two areas that were victims of now-executed dictator Saddam Hussein’s conscript army.

However, two members of the Iraqi parliament’s security and defence committee — one a Shiite from the southern province of Basra who belongs to an Islamist party, the other a Sunni from the western desert region of Anbar who is part of a secular bloc — back the proposal and want to see it through.

“The circumstances are good for applying a law like this one, and there are important reasons to do so,” said Ammar Tohma, a member of the Shiite Fadhila party. “The regime in Iraq these days is based on the will of the nation; we are no longer dealing with the foolishness and adventures of the dictator.”

Tohma argued that compulsory military service for young men would reduce Iraq’s unemployment, officially reported at 12 percent but estimated to be much higher, and foster a national identity after years of communal violence that followed the 2003 US-led invasion.

He said the proposal was still only being discussed within the committee, and admitted that “the idea of conscription, with the mistakes of the former regime and the pressure it put on individuals and families,” is still negatively perceived by many Iraqis.

Saddam’s armed forces once numbered as many as one million strong before the 2003 US-led invasion that ousted the dictator.

The old Iraqi military had been formed of male conscripts, with those who did not complete secondary school, secondary school graduates and degree-holders required to complete three years, two years and 18 months in the armed forces, respectively.

In reality, many were forced to stay for much longer than those periods, and students would often purposely fail courses in order to postpone their military service.

After the invasion, however, the ruling Coalition Provisional Authority disbanded the entire Iraqi military, security and intelligence apparatus, a move widely criticised as fuelling the insurgency against US forces.

In any event, it meant the armed forces would have to be rebuilt from scratch, with the aim of building a professional volunteer military. They now number around 300,000, primarily from the army and support staffs, but also including a fledgling navy and air force.

“Military service implants a feeling of citizenship,” said Hamed al-Mutlak, a Sunni lawmaker belonging to the Iraqiya bloc who retired from the army in 1993 as a brigadier general.

“When the son of Anbar does his service in Basra, and vice versa, and the same for all the provinces of Iraq, it brings back feelings of loyalty to the country,” said the 62-year-old, whose brother, Saleh al-Mutlak, is the country’s deputy prime minister.

“In the past, military service was too long and involved Iraq in wars. There was no need, then, to fight unemployment or sectarian feelings, like there is now,” he added.

Iraq’s government relies on oil sales for the vast majority of its revenue, but the United Nations estimates that while crude accounts for 65 percent of gross domestic product, it is responsible for just one percent of jobs.

The imbalance, combined with a moribund private sector, has resulted in unemployment estimated by non-government groups to be as high as 30 percent.

And a survey late last year from the US-based National Democratic Institute listed unemployment as the biggest concern for Iraqis nationwide, with 85 percent of respondents arguing that the job situation was getting worse.

Violence, meanwhile, is down dramatically compared to 2006-2008, when sectarian bloodshed pushed Iraq to the brink of all-out civil war, but tension remains high, especially after an arrest warrant was issued by the Shiite-led government against a Sunni vice president on charges he ran a death squad.

Whether conscription would solve those two crucial issues, however, remains an open question.

Hamid Fadhel, a professor of political science at Baghdad University, noted that such plans would ensure by default that all of Iraq’s various sects would see proportional representation in the armed forces, but voiced concern that the proposal could harm the quality of the country’s fledgling military.

“Participating in compulsory military service would support one’s feeling of belonging to Iraq … (but) I think the idea of building a professional army should be kept,” he said.

For Abu Marwan, however, the issue is a more practical one.

The 65-year-old veteran of the Iran-Iraq war, during which he was wounded twice, complained his son spent too much time sleeping, concluding: “Returning to compulsory military service is an excellent idea.”

“The army makes real men — not like the softies we have now.”