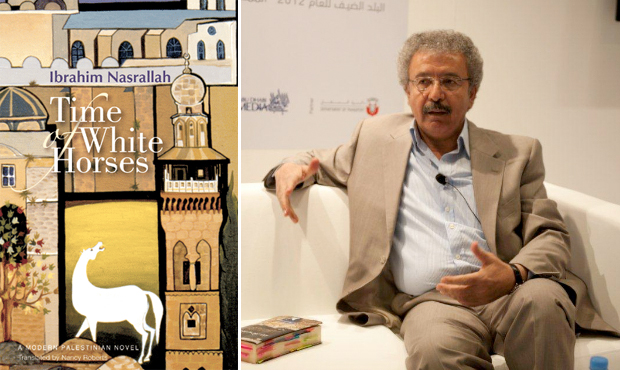 The recent period has been rich in historical narratives set in Palestine, creative offerings that take us back before the establishment of Israel. Three worth reading are out in English this year: Of Noble Origins by Palestinian novelist Sahar Khalifeh (AUC Press), As Though She Were Sleeping by Lebanese novelist Elias Khoury (Archipelago), and Palestinian writer Ibrahim Nasrallah’s Time of White Horses (AUC Press), which was shortlisted for the 2009 International Prize for Arabic Fiction.

Nasrallah’s Time of White Horses, translated by Nancy Roberts, is the largest in scope. The other two books focus on the time just prior to the 1948 Nakba, or “Catastrophe,” in the days before many Palestinians were forced from their homes. Time of White Horses also ends at the doorstep of 1948. But it begins much earlier, during turn-of-the-century Ottoman rule. Nasrallah’s novel is a sprawling, multi-generational work, similar in breadth and ambition to Naguib Mahfouz’s celebrated trilogy.

It is perhaps an unfair comparison, but both Nasrallah’s novel and Mahfouz’s trilogy chart the lives of a multigenerational Arab family. Both highlight how characters adapt to—or fight against—social and political change. Certainly, the changes that take place in Mahfouz’s Egypt pale in comparison to those faced by Nasrallah’s Palestinians.

When we first meet Hajj Mahmud and his family, in Time of White Horses, they are living in a Palestinian village that is ruled by distant and disorganized Ottomans. The appearance of British forces slowly changes the social and political landscape. Later, the characters are surprised by a nearby Jewish settlement, which grows larger and bolder; finally, there comes the confusing and frustrating loss of safety, dignity, and home.

In Mahfouz’s Trilogy, Abd al-Jawad and his family are powerfully foregrounded. We experience time, and the meaning of Time, through the lens of these characters’ beliefs. Time of White Horses does not have the Trilogy’s philosophical ambitions. Nasrallah’s book also lacks its compelling, tightly woven characters: Although Hajj Mahmud—and later his son Hajj Khaled—are leaders in their community, neither they nor other family members have vivid interiors.  Instead, it is the slow march of events itself that holds Nasrallah’s novel together.

Character development is perhaps hobbled by the footnoted, patchwork nature of the novel. We are told in the preface that much of the book was built on interviews with an earlier generation. Indeed, long passages in the translation appear in italics, indicating that the material is “real,” or taken directly from Nasrallah’s interviews. These sections have a distinctly different flavor from the rest of the book, creating a pastiche-like quality that sometimes adds to the book’s historical weight, but is more often jarring.

There are some wonderful, memorable sub-stories in this multilayered epic. Highlights include the tense rivalry between Hajj Khaled and the bitter British soldier-poet Edward Peterson; the wonderful showdown between the cruel Habbab and his strong second wife Rayhana; the sudden and faceless encroachment of the settlement onto the villagers’ land. Ultimately, though, this is a collection of knitted-together moments, and not a powerful novel of epic proportions.