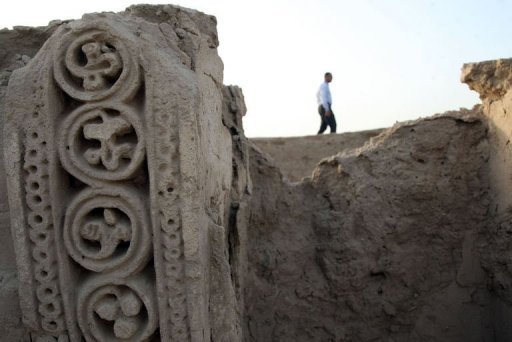 A stone’s throw from Iraq’s Shiite holy city of Najaf’s airport, the remains of the celebrated ancient Christian city of Hira lie neglected and mouldering, because funds for excavation have dried up.

Three sites, discovered five years ago, are unexplored and unkempt, and officials fear the uncompleted excavation could lead to their eventual demise.

The sites, which contain mud walls and jars that are exposed to the elements, lie fewer than 100 metres (yards) from an active runway, are not fenced off and have no security except their proximity to the restricted airport area.

They form part of the ancient Lakhmid capital of Hira, on the outskirts of Najaf, 150 kilometres (95 miles) south of Baghdad.

The Lakhmids were a pre-Islamic Arab tribe that is believed to have emigrated to what is now Iraq from Yemen in the second or third century. The founder of the dynasty was Amr, whose son, Imru al-Qais, converted to Christianity.

In 266, the Lakhmids turned the former military encampment of Hira into their capital.

Establishing their empire across what is now Iraq and northeastern Arabia, they held sway across the lands that lay between the Persians — to whom they were vassals for several centuries — and the Romans.

They were a major force among the pre-Islamic Arab peoples, with their culture and learning spread widely and where the early Arabic alphabet was standardised.

Arab poets described Hira as a paradise on earth, with one saying that, because of the city’s pleasant climate and beauty, a day in Hira was “better than a year of treatment”.

Hira, which extends around 17 kilometres (10 miles) south from Najaf, remained the Lakhmid capital until 663, when Muslim general Khalid bin al-Walid conquered it on the orders of Abu Baqr, the immediate successor of the Prophet Mohammed.

“The area has historical importance, because it is rich in antiquities, including especially the remains of churches, abbeys and palaces,” said Shakir Abdulzahra Jabari, who led excavations there in 2007, 2009 and 2010.

“But now, the antiquities have been neglected for a year, and they do not receive any attention, despite the fact that many Western countries are interested in Hira’s history as the main gateway of Christianity into Iraq.”

Hira was famous for its arable land, and for its palaces and monasteries, notably the Aoun al-Abadi Palace, which hosted visiting dignitaries, and the Al-Lij monastery.

The sites feature the historic treasures of the Lakhmid era, such as the bases of massive abbeys that include dozens of rooms, from studying halls to monastic cells and storage areas.

“Christians have lived for a long period of time in the Hira region, where they formed around one-third of the city’s population, with the Al-Abad tribe the most well-known of their community,” said Yahya Kadhim al-Sultani, a professor at Kufa University in Najaf’s twin city.

“Hira was characterised by a not insignificant number of churches built for living in, and the practise of various scientific and cultural activities,” Sultani added.

The ancient city has seen several excavations in decades past, Jabari said.

Oxford University researchers explored the site in the 1930s, and Iraqi antiquities experts carried out their own excavations in 1938, 1956 and 1957.

It was during the latter set of explorations that the Palace of Al-Khawarnaq, built during the reign of fourth and fifth century King Numan I was discovered.

But since the 2003 US-led invasion that toppled Saddam Hussein, Baghdad’s government has had bigger priorities than funding large-scale digs in a country with more than 12,000 documented archaeological sites.

Foreign exploration teams have largely avoided Iraq entirely over security fears, even though levels of violence in the country are significantly lower than their peak in 2006 and 2007.

And those who have come have largely chosen to focus on the autonomous and relatively safe Kurdistan region in the north for excavations.

“The excavation works resumed in the area in 2007. When expansion work was being done to Najaf airport, the first three sites were discovered,” said Jabari.

“We have worked to save it from the (airport) expansion process.”

Since then, several digs in an area of 3,000 square metres (32,300 square feet) have uncovered the bases of mud-built structures, as well as crosses etched into walls, and a piece of wax marble with the inscription, “Blessings from God, and God forgave the followers of Christ.”

In 2009, the Najaf provincial department of antiquities said researchers had unearthed around 2,100 artifacts in different parts of the province, including coins, pieces of pottery and a number of buildings dating back to the Lakhmid dynasty.

“But exploration work stopped a year ago because of time limits on the project, which ran out of money, and no maintenance work has been done on the sites since,” Jabari said.

He now fears that further neglect will lead to the antiquities’ destruction.