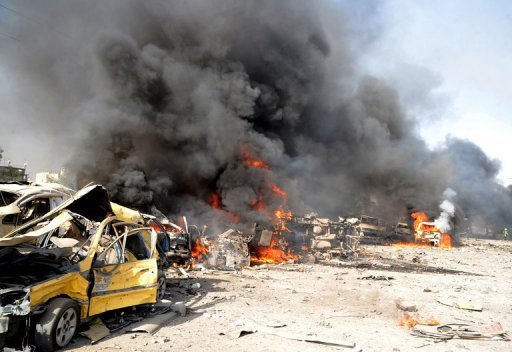 I was standing in the kitchen of an old Damascene house in the Christian quarter of Bab Touma when a figure burst through the door, brandishing a gun and crying “Kill the Islamists, kill the Islamists!”

He pointed the gun at my face and pulled the trigger. “Bam, bam!” he cried, and “pop, pop!” went the plastic gun.

The boisterous ten-year-old son of the Christian family with whom I shared the house had apparently chosen me to be the bad guy in this Syrian version of cops and robbers.

This was more than a year before the current conflict in Syria began to unfold. Looking back, it seems to have been a sign of things to come.

It was easy enough to believe, walking through the old city of Damascus and seeing churches and mosques side by side in the ancient, winding streets. But there was an underlying tension that became more apparent the longer I stayed in the country, from a young boy playing an Islamist killer, to a Muslim friend who had to take on a Christian alias to attend an acquaintance’s birthday party.

Likewise, the Al-Assad regime has attempted to portray the current conflict as a struggle between its secular Pan-Arab ideology and the forces of Islamism.

Secular here, of course, must be taken with a grain of salt. The Al-Assads have chosen to ally themselves with the Islamist regime in Iran and Shi’a Islamist militia Hezbollah in Lebanon. Meanwhile, the Syrian regime is dominated by figures from the president’s own religious sect, the Allawis.

It may all seem very Machiavellian rather than a matter of principal, but the Al-Assads take their ideology very seriously. These are, after all, the Western-educated elite who, a government supporter once put it, “are trying to lift the Syrian people up to their level”.

The Syrian leadership’s desire to improve the state of the ignorant Syrian masses was illustrated by cartoons circulated among Al-Assad’s inner circle. The snide jabs at Arabs, and particularly conservative Muslims, were found amid a large cache of emails provided to the media by activists who had hacked into Al-Assad’s account.

One such cartoon shows a picture of a kitten urinating in a toilet, and then moves to an image of a man in a traditional Arab headscarf urinating against a wall. Another is entitled ‘Why God sends rain to Mexico and not to the Middle East’. It shows photographs of scantily clad weather women and ends with an image of a covered Muslim woman in front of a weather map holding an umbrella.

The irony is bitter; indeed, not much rain has come Syria’s way in recent years. The cruel drought and the government’s absolute failure to respond have resulted in an unprecedented internal displacement of the rural population. Though rains have returned to Syria in the last two years, by 2010 the drought had already pushed two to three million Syrians into extreme poverty, according to the United Nations. In 2010, around 50,000 families fled from drought hit areas to live in squalor around the outskirts of urban areas.

Syria “constitutes a unique example” of the link between extremism and a lack of inclusive and effective governance.

In the decades before the Al-Assads’ rise to power, Syrians twice elected a Christian prime minister. In the 1960s only a small minority of Syrian women wore the hijab. Then, in 1970 Hafez Al-Assad, the father of the current president came to power in a military coup. As his secular military regime solidified its autocratic grip, Syria witnessed a wave of conservatism and accompanying Islamist ideologies among the majority Sunni population.

Analysts point to numerous factors behind Syria and the Middle East’s turn to conservatism and the spread of radicalism, among them defeat at the hands of Israel, domination by Western powers, and Middle Eastern culture itself. Some even pinpoint sexual frustration as an incentive for radicalization.

Various explanations are valid and all are linked, but an obvious element of this volatile mix was too easily ignored previous to the Arab Spring: draconian limits on freedom of expression, a culture of corruption, a lack of economic rights and development, non-existent rule of law, a deplorable education system, countless atrocities against civilian populations in the name of fighting Islamists, domination by a minority religious sect…the list goes on. The champions of secularism and religious tolerance transformed Syrian society into what it is now – sedated and suffocated, the comfort of the mosque is the only source of relief.

The Al-Assad regime chooses to hold the highest contempt for a society that they themselves created, rather than trying genuinely to better that society. They willfully ignore the correlation between political, economic, and cultural oppression and the development of religious conservatism and radicalism, to their own benefit – or downfall.

The current slaughter, largely carried out by members of the president’s minority religious sect, may prove the final nail in the coffin of tolerance. As the Syrian leviathan continues its savage crackdown, Al-Assads’ Islamist boogeyman is becoming a reality.

While the revolution’s liberal activists are being slaughtered and imprisoned by the regime, they also complain of being sidelined by increasingly aggressive Sunni Islamist elements of the uprising. In the two biggest urban centers, Damascus and Aleppo, car bombs are exploding in scenes reminiscent of Iraq. Reports of Islamist militants slipping into Syria from neighboring countries are on the rise. Among my Syrian acquaintances, clean-shaved faces are giving way to beards.

According to a report recently published in the Washington Post, the Syrian Muslim Brotherhood is playing an increasingly prominent role in moving humanitarian aid and weapons into Syria.

Statements from activists calling for human rights and dignity have given way to quotes from the Qur’an promising victory to the believers.

In a video posted on Youtube in December 2011, a man with a microphone asks a massive crowd in the rebellious city of Homs:

“Does victory come from Obama?”

“Does victory come from Erdogan?”

“Victory comes from where?”

It’s an impressive sight, a crowd of thousands declaring their commitment to continue struggling for freedom even as the world turns its back.

Government supporters watch this same video and see fanatics declaring Jihad. Their point of view may be a dangerous oversimplification, but a sense of abandonment among the opposition has made Syria fertile ground for extremist ideologies.

Meanwhile, after egging on protesters and militants with empty rhetoric and sanctions, the so-called Friends of Syria continue pursuing flawed diplomatic solutions while trying to determine the merits of international intervention in its various potential forms. Policymakers must realize that in the time it takes them to ponder – the length of an electoral season perhaps – the Syrian regime’s brutality is creating a whole new generation of religious extremists.

When Syria becomes a hotbed of Islamist terrorism and radicals begin pouring from this once beautiful country into the rest of the region and beyond, Westerners will stand morally outraged at the ensuing atrocities and ask the inane question “why do they hate us?”

The answer on many lips will be “because they hate our freedom”, but the correct answer is: we failed to uphold theirs.