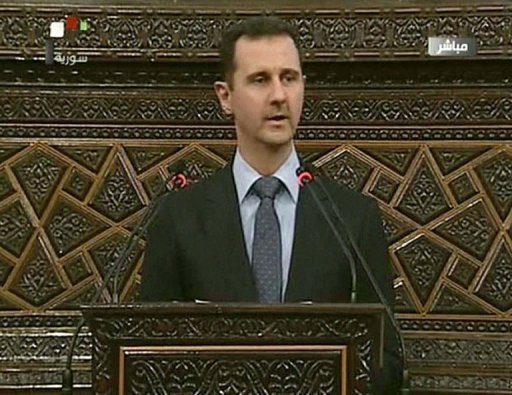 Russia said Tuesday it was prepared to see Syrian President Bashar al-Assad leave power in a negotiated solution to 15 months of bloodshed that has claimed more than 13,000 lives.

Deputy Foreign Minister Gennady Gatilov said a day after meeting mediator Kofi Annan in Geneva that Russia would back any peaceful settlement to the crisis as long as it did not involve the use of outside force.

“We have never said or insisted that Assad necessarily had to remain in power at the end of the political process,” Gatilov told the ITAR-TASS news agency in Switzerland.

“This issue has to be settled by the Syrians themselves.”

The comments represent one of Russia’s most explicit declarations of a position first signalled by Foreign Minister Sergei Lavrov a day after a February 7 meeting in Damascus with Assad.

Lavrov at the time refused to explicitly back Assad and said the leadership structure of Moscow’s Soviet-era ally “should be the result of agreement between the Syrians themselves.”

Russia has been facing mounting pressure to back Assad’s departure as a first step in a settlement that would see his inner circle assume command on an interim basis.

The option is modelled on the recent transition in Yemen and has been backed by the US administration.

The New York Times has reported that US President Barack Obama plans to raise the initiative when he meets Vladimir Putin for the first time since his May return to the Russian presidency at next month’s G20 summit in Mexico.

Russia blocked two past UN resolutions condemning Assad out of fear that they may be used to order strikes against an ally it supplies with $1 billion in weapons per year and uses for diplomatic influence in the Middle East.

The New York Times however said US diplomats felt that Russia viewed such a transition as a way of keeping its old ties in Syria while avoiding a more serious confrontation with the West.

Gatilov said Tuesday that the Yemeni model might be appropriate for a strife-torn country in which the parties were still willing to sit down and talk.

But Russia accuses the rebels of using arms shipments from Arab countries to stage “provocations” against Assad’s forces aimed at inciting ever more deadly violence that would force Western powers to intervene with force.

“When we discuss applying the Yemeni model to the situation in Syria, we have to keep in mind that unfortunately, there is no desire from the opposition to engage in any political talks with the government,” Gatilov said.

“It would be good to … see a political will from both sides that would allow us to move toward a settlement,” he added.

“And in that case, it would probably be appropriate to talk about the Yemeni model.”

US Secretary of State Hillary Clinton called Tuesday on Russia as well as China to be “part of the solution” to the crisis in Syria after they agreed to work together more closely in the United Nations.

“We believe there is a way forward and we are ready to pursue that. And we invite the Russians and the Chinese to be part of the solution,” she said at a news conference in the Georgian Black Sea city of Batumi.

Deputy Foreign Minister Mikhail Bogdanov however signalled that Russia intended to focus the talks with Clinton’s envoy on saving mediator Annan’s tattered peace plan rather than discussing what options to pursue next.

Annan delivers a report on his Syrian plan’s implementation to the UN Security Council on Thursday.