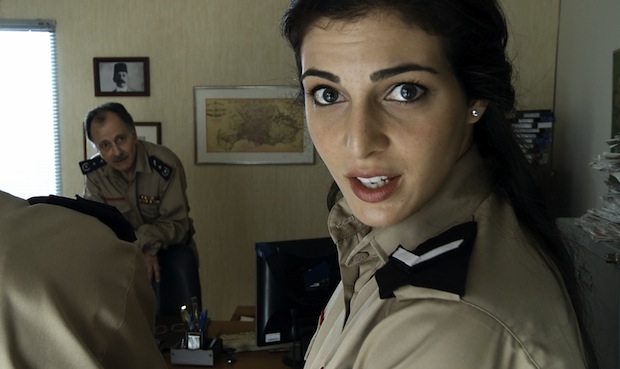 A new web-series that takes you up close and personal with the (in)famous Lebanese Censorship Bureau.

MAMNOU3 means “forbidden” in Arabic. Add an exclamation mark and it’s the title of a groundbreaking new Lebanese web-series about the day-to-day inner workings of the country’s Censorship Bureau. The mockumentary, created by 22-year old investment banker Nadim Lahoud together with Samir Kassir Foundation’s Skeyes Centre for Media and Cultural Freedom, brings much-needed comic relief to a controversial topic.

While state censorship often makes headlines in Lebanon, usually when a movie or a book is banned, this series comes as a breath of fresh air by questioning the government institution itself.

“We have gone on the offensive and attacked the very institution of censorship. Previous campaigns have centered on reversing specific censorship decisions after they have taken place. These campaigns are invaluable, of course, but we want people to go deeper than just question specific rulings. Instead, by highlighting the absurdity of censorship as a whole, we want the Lebanese citizen to ask the following questions: By whom, why and by what authority is censorship carried out in the Lebanese State?” explains Lahoud.

The web-based documentary does not fall under the jurisdiction of the Bureau… for now. Recent attempts at regulating online space in Lebanon were quickly swept under the carpet when online activists reacted in outrage. However, Lahoud and many other Lebanese are worried that the biggest threat to online freedom of expression in Lebanon is actually the quality and reliability of Internet connections. In that context it is worth noting that the country recently experienced a two-day Internet blackout that paralyzed companies and individuals.

In any case, it is certainly interesting to meet the fictional characters of MAMNOU3! One officer at the Bureau would rather be working in IT; another still has acting aspirations whereas some of them have indeed found their true calling in joining the national moral compass. The Colonel in charge of running the department is a seemingly well meaning albeit quite clumsy and condescending authority figure who agrees to allow a performance of Jean Paul Sartre’s La Putain Respectueuse provided the author comes in person to present his request. “LOL moments” are guaranteed but the Lebanese public will at the same time have little trouble seeing the relevance of such scenes, as censorship in Lebanon has repeatedly demonstrated a unique tendency for absurdity.

When asked if the series will also tackle the role of religious figures in censoring freedom of expression, Lahoud promised MAMNOU3! will not disappoint, pointing out that “Lebanon’s censorship authorities routinely act at the behest of religious or political authorities that have absolutely no democratic accountability”.

It would be interesting to get feedback from the actual Censorship Bureau on the web-series that’s making the department even more (in)famous. Lahoud simply hopes that “they recognize how absurd their very presence has become; thousands of their compatriots are now coming to that conclusion every day.” To be continued then…

Meanwhile, you can catch the series on http://mamnou3.com/ (English subtitles).