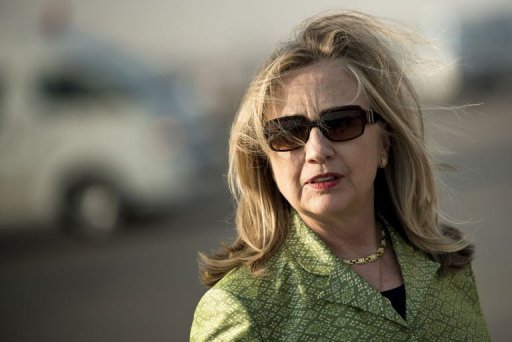 US Secretary of State Hillary Clinton was taunted by chants of “Monica, Monica” by tomato-throwing demonstrators as she visited the Egyptian port city of Alexandria on Sunday.

The chants, referring to the Monica Lewinsky scandal when her husband, Bill Clinton, was president, were heard outside the US consulate as she visited for its reopening.

An embarrassed Egyptian security official said they were chanting “Monica, Monica” and “Irhal, Clinton” (Get out, Clinton.)

Tomatoes, shoes and a water bottle were thrown at part of Clinton’s motorcade as it pulled up, protected by riot police, although a US official said Clinton’s own vehicle was not hit.

The protest appears to have been the result of suspicions that Washington had helped the Muslim Brotherhood win elections in Egypt in the wake of last year’s ouster of president Hosni Mubarak after 18 days of massive street protests.

“I want to be clear that the United States is not in the business, in Egypt, of choosing winners and losers, even if we could, which, of course, we cannot,” Clinton said at the opening of the consulate.

The consulate was closed in 1993 due to budget cuts but has been reopened to assist the Egyptian economy in a key port city.