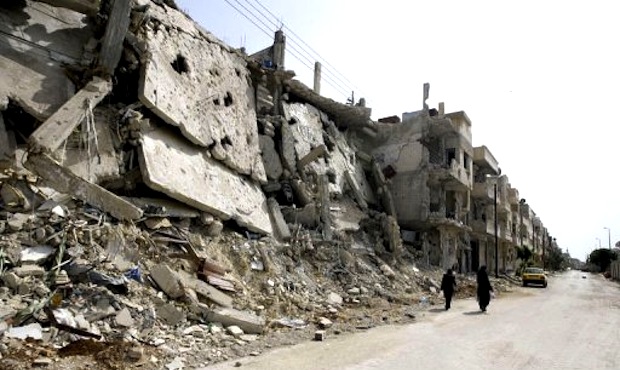 "Bashar al-Assad’s regime has lost control of urban space. There is now another Damascus in Damascus," writes Deen Sharp in his latest column piece.

Control of urban space is key to the survival of the state and its institutions. It is in the urban spaces of the Middle East that the final acts of authoritarian leaders have been played out, for example in Baghdad, Tripoli, Cairo and Sana’a.

The suicide bombing that killed the Minister of Defence, Dawoud Rajha, and Assad’s brother-in-law, Assef Shawkat, marks the final spatial shift of the Syrian conflict to Damascus, the seat of power. We are now seeing increasingly intense clashes taking place in the city.

Until now, the Assad regime has relied, in part, on a strategy of urbicide. It is a strategy in which the built environment of a targeted population is annihilated and remoulded – or not, as the case may be – to achieve the desired political, socio-economic, ecological and cultural effects i.e. spatial domination.

The Assad regime has resorted to urbicide before. In 1982, Islamists in the small city of Hama revolted against the Hafez al-Assad regime. Syrian historian Patrick Seale noted that the battle for Hama, “was a last ditch battle which one side or the other had to win and which, one way or the other, would decide the fate of the country.” The Assad regime won.

Syrian immunologist Bara Sarraj reported on his visit to Hama following the 1982 onslaught by the regime that “not a single tombstone was in its place.” In the aftermath of the conflict, the regime reformed the urban fabric of Hama. Instead of political and socio-economic reform, the regime doled out public largess in the form of roads that tore through the urban fabric, large public buildings, parks, and an Olympic-sized swimming pool.

The Assad regime was not just remoulding the urban fabric but the Hama citizen. The Assad regime desired to transmogrify the Hama Islamist into the Hama Ba’athist. Seale noted, “Among the revolutionary changes was the introduction of mixed bathing in 1983 and the first college dormitory block in the whole of Syria to house both male and female students.”

In the current revolt, the regime has once again committed urbicide on Hama. However, this time the byword for massacre and destruction is not only Hama, as it was in 1982, but simultaneously: Homs, Dera’a, Houla, Deir al-Zour and Khan Sheikhoun. And now Damascus.

Previously Damascus could launch an attack, just as Washington or Westminster could wage war, or Rome could once be an empire. Indeed, Hafez al-Assad was known as the butcher of Damascus, a title inherited by his son Bashar. Now, however, Bashar al-Assad’s regime has lost control of urban space. There is now another Damascus in Damascus.

The battle for Damascus is a watershed moment in the battle for Syria. As in Hama, Homs and other cities across Syria, we are likely to see enormous acts of violence against urban dwellers and urbanity itself. It is of note that the fighting started away from Damascus Boulevard, the Four Seasons Hotel, separated from Assad’s red carpets and shopping malls. Instead the fighting has started in the old quarters of the city, in the stoned labyrinthine of narrow streets and houses, difficult for the heavy weaponry of the regime to operate in.

The regime now faces an existential crisis. Does the butcher of Damascus take an ax to himself? Does Assad enact urbicide on his own seat of power? Unlike in Hama or Homs, the Assad regime cannot withdraw from Damascus and annihilate the urban fabric to remold it in a more compliant self-image. Damascus is supposed to be the regime’s image. The predatory ‘success’ of the regime has finally caught up with it.

Where to now? The Syrian conflict is heading into ever more nihilistic ground. The battle over a city once again decides the fate of the country. Whoever holds Damascus, holds Syria. Things may all fall apart, the centre may not hold. All that is solid may turn to rubble. Or is this the beginning of the end for Assad’s Damascus and the start of another Damascus in Damascus?