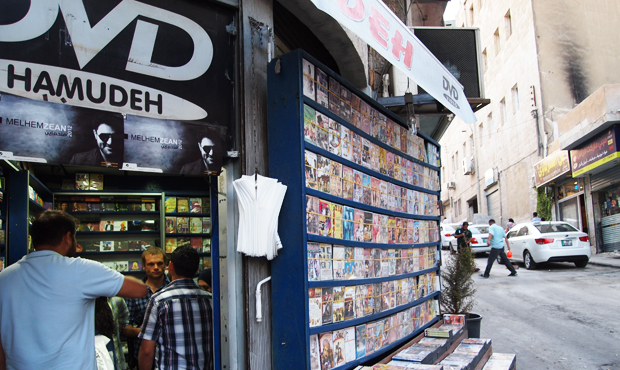 “Hamudeh DVD” has become a household name in Amman. You can tell who’s been to Hamudeh by the stack of thin DVD cases and unlabeled discs that nest by their television sets. For many, trips to the pirated DVD store have become weekend staples.

Any stigma that might have existed against buying pirated DVDs has left no trace on the eager customers that file in and out of Hamudeh on any given day. This Ramadan, the chain will doubtless enjoy increased business as fasters look for something to keep their minds occupied as they wait for the dusk prayer.

At first, Hamudeh was nothing more than a downtown kiosk, then it expanded to include a store in a nearby building. Instead of hiding in a back alley like most sellers of pirated DVDs, Hamudeh has a large black sign that hangs proudly atop the storefront. Inside the store, DVDs line the shelves from floor to ceiling where they are barely held together by thick rubber bands. It is how I would imagine Scorsese’s closet to look. There is a system to the disorder, but only the people working there truly understand it. “New movies by the door, comedies at the back wall, Arabic movies to the right, and kids movies by the checkout,” says one of the men working there during my visit. The vendors have the entire collection catalogued in their memories. It almost seems that every DVD in the world is available for purchase here, from Apocalypse Now to the Lion King.

At the start of each movie, the owners have shamelessly inserted a commercial for Hamudeh that usually runs right up to anti-pirating ads. The movies are subtitled in badly translated Arabic, and every few minutes a warning appears: “This is a private screening copy not for commercial use”.

Hamudeh isn’t the only pirated DVD store in the city, but it is the most successful. Nine times out of ten, the DVDs are of the same quality as those bought legally. Their releases are timed perfectly, and the clerks are crafty salesmen. Walking out of the store empty handed is nearly impossible as a movie sells for just over one euro. Hamudeh has discovered a winning formula: cheaper than Apple TV, newer than Netflicks, more private than the cinema, plus you get to keep the movie. The return policy is unreal. Imply that a certain movie wasn’t clear and the storeowners will replace it for you or give you another film without question or hesitation.

Hamudeh has always been popular, but took a leap about five years ago when it opened a store – a hole in the wall – in Abdoun, the upper class neighborhood of Amman. Prices were adjusted for the new clientele from from 1 to 1.25 Jordanian dinars (on the date of publication, 1 Jordanian dinar, JOD, = 1.16 euro). Someone at Hamudeh caught wind of the addictiveness of American TV shows. Overnight, it became the latest trend to watch American sitcoms and hold movie nights. Today, Ammanis young and old flock to get their fix of “Greys Anatomy” or “Game of Thrones” hot off the burner.

I went to the original store one weekend to try and understand how Hamudeh routinely releases blockbusters like “Spiderman” weeks before they premier in the United States. At first, the man inside was friendly. We talked as I browsed the DVDs. “So, which one of you is Hamudeh?” I tried to casually slip in. He froze up. “We’re all Hamudeh, what’s it to you?” he replied, as if he was on the set of The Godfather. I asked him how many DVD’s they sell in a year. “Sorry all numbers are confidential,” he continued, “we can’t let the competition in on our sources.”

Ethical or not, the store has introduced an entire segment of society to a steady stream of movies and shows, making a film enthusiast out of the average Jo. Three years ago, Brad Pitt and Angelina Jolie were in Jordan and decided to go for a walk with their kids down Amman’s Rainbow Street. Immediately, they were recognized, photographed, and followed by makeshift paparazzi. In a similar way, pictures of Ben Affleck visiting downtown Amman went viral. Maybe – and this might be a bit of a stretch – Hamudeh has sped up the process of globalization in the Hashemite capital. Last year at Cannes, the French pay television channel Canal+ won the Grand Prix for advertising. The humorous commercial featured a bear rug positioned in front of a television. Inspired by all the movies he saw, the bear become a film director, a temperamental one sporting a thick French accent. The selling point was that “the more you watch Canal+, the more you love cinema”. To a large extent, this is true. People become film lovers by watching films, and Hamudeh has allowed a lot of people to watch a lot of films.

Proof of this fresh appreciation is found in the people who work at Hamudeh. I asked a clerk what his favorite film was, and his response surprised me. “Legends of the Fall,” he said, “Brad Pitt is at his best, and Hopkins is, of course, a master.” I found that almost everyone working there has a true love for cinema.

One ex Hamudeh employee now works at the RFC’s film library. Thaer Kashour was discovered by the employees of the RFC and promptly hired. His job was to address the historical gaps in the RFC’s film library. He is known not as the librarian, but as “the library”. Speaking to Kashour about films is like speaking to a living incarnation of the Internet Movie Database. He can list the films of any actor by release year and discuss them in detail. He is a product of the Hamudeh effect.

Jordan has a young, booming film industry. In 2007, the first local feature film “Captain Abu Raed” premiered in cinemas around the region and went on to win awards at several major film festivals including Sundance. Since then, there have been several international features shot in the country, including parts of Transformers II and Prometheus. More interesting local films are now in production or post-production. A partner of the University of South California Film School, The Red Sea Institute for the Cinematic Arts (RSICA) opened in 2008 and continues to be the first MFA program for the cinematic arts in the Middle East and North Africa region.

As Jordan prepares itself to compete on the international film scene, the government has an obligation to protect its artists, which means that pirating operations like Hamudeh should be brought to a halt. I support that, but I will nonetheless be sentimental to see Hamudeh close down. The backstreet venture saw Jordanians from a young audience to seasoned film buffs.