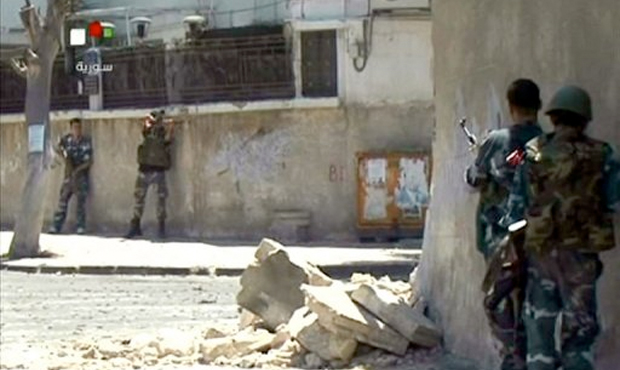 Photographer John Wreford has lived in Syria for many years and still remains in his house in Damascus’ Old City. Here, he gives a very personal account of the last couple of weeks' events.

A warm summer evening sitting in a central Damascus restaurant overlooking the city, the mountain of Qasyun lit like a Christmas tree, we were under no illusion all was well in Syria. But here in the capital life went on almost as usual. We discussed how things the last week or so had calmed down, then for a moment we paused for thought, the calm before the storm perhaps.

No more than a few days later the storm well and truly blew into town. For months, the opposition and regime had been battling each other in the outer suburbs of Damascus. The sounds of shelling and artillery echoed across the city, peaceful protestors were still coming out in large numbers, more and more clashes could be heard, but by and large everything tended to take place in certain areas.

It was pretty well known that the Free Syrian Army had been moving into Damascus and was encamped in the more militant neighbourhoods such as Midan and Kfra Souseh. But many of us felt able to go about life as usual despite knowing that sooner or later things would change. From Sunday we felt that change. The war had been on the doorstep but was now passing over the threshold, more explosions, more shooting, the awful sounds moving closer and closer, the continuous drone of helicopters that had become a regular feature over recent weeks.

Where I live in the Old City between Bab Touma and Bab Salam, ancient houses in a warren of alleyways, things were calm, children playing in the streets and many preparing for Ramadan. I would sit on my roof early morning and in the evening, able to get more of a fix on where the sounds of gunfire may be coming from. I can see very little, four large satellite dishes prostrated toward Mecca have seen to that. Monday through Tuesday the fighting became more intense, my house shook as a helicopter was shot down in Qaboun and at one point a couple of stray bullets whizzed through the air above my head, the sound like an email being despatched from an iPhone. The explosions and gunfire continued all through the night.

I woke up on Wednesday to more of the same. I felt safe enough near my house but the thought of what was happening elsewhere in the city was stomach churning. How can we know what weapons are creating those sounds, what carnage they can be causing? Then a couple of very loud bangs, from some distance but I felt a shudder. A car bomb had exploded outside the law courts a couple of weeks earlier and it felt much the same, it seemed already I was learning the difference between car bomb and artillery. Soon the television news was reporting on the attack on the security meeting and possible deaths of government ministers. I left the house and as I arrived in Qamaria, near my home, the shopkeepers were excitedly rushing from shop to shop with updates on the unfolding events. Some were just staring at the screens in almost disbelief, the attack happening in one of the most secure areas of Damascus, a stone’s throw from the presidential office and American embassy.

The sounds continued, the crackle and pop of God knows what. Then while on the phone stressing that this little corner of the Old City was going about its business as usual, I watched two armed men climb onto the roof of a house a couple of streets away. I went downstairs and told the neighbours’ children to go inside. I walked around the alleys close to my house. I have always considered my immediate neighbours as loyal to the regime. They seemed ok with the gunmen on the roof, and the children were soon back playing in the street. It’s this last point that gives me cause not to trust their judgment.

Back in Qamaria people were closing their shops early, some had already preferred to stay the previous night in their shops. As the sun was setting I checked the roof again, the gunmen had made themselves comfortable and had hung flags to indicate they were from the regime. A little after dark a couple of loud explosions, some distance away, and then the electricity was cut. Suddenly several bursts of gunfire from somewhere in the neighbourhood, then quiet again, for the next couple of hours it was calm, the neighbours preferred to chat in the alley under the still working lamp. The power returned just before midnight, then at two am a whizz and explosion in one of the surrounding alleyways, then quiet again.

That Wednesday in Damascus, it seemed as though all hell had broken loose, so much happening in so many places. People were finding it difficult to process the overload of events, only pulling themselves away from the television news to answer the phone from a friend or relative, first trying to find out if everyone was safe then updating on the latest bulletin, with rumour and conspiracy as ever rife.

The dawn broke on Thursday with the familiar awful sounds of war, the hollow thud of what no doubt must be tank fire, somewhere east of the Old City, Qaboun maybe. Helicopters circling high above the city. Slowly people came back out onto the streets, not many, only locals, gathering in small groups discussing the night’s events. Very few shops opened, some shop owners preferring to stay the night in their shops rather than risk the journey home. Never have I seen the Old City like this, it’s the last Thursday before the holy month of Ramadan and the streets would normally be crowded with shoppers. Hushed tones and nervous expressions, glances to the sky as another explosion echoed. As the day passed the noise of fighting seemed less intense, the news coming from the outside suburbs though was horrific. Those who could find room elsewhere were trying their best to leave for safer areas, many extended family members had already moved in with others, my neighbour has all his relatives from Harasta now living with him. The small house must have a dozen or more living there now. Another neighbour borrowed bedding from me.

The rubbish was already piling up in the streets, the refuse collectors had not turned up at all and it doesn’t take long for the smell in the Damascus summer heat to become offensive. Late afternoon I visited the vegetable market on the other side of Straight Street. The usual thriving souk was deserted, little fruit or vegetables available, rumours of panic buying had already circulated around the wider city. Most likely the suppliers were simply unable to get through, or not willing to try. We know which areas are having the worst problems and we can call ahead to get details but the journey between is an unknown quantity, few people prepared to risk it. By six in the evening the few shops open were closing. In the year and a half of the on-going crisis the Old City has never felt this way. The only guest eating in the city’s most prestigious restaurant was the manager.

Thursday night passed with relative calm, probably for many the first chance of some sleep, but just before 7.30 on Friday morning the drum-like sound of artillery shakes me literally from my sleep, a few minutes later another salvo of several blasts, then quiet again. I tried to convince myself that the neighbourhoods where the shells must be landing would now be empty of its inhabitants and the battle was between two warring armies, in my mind those horrific images from wars past, Lebanon, Yugoslavia, Chechnya.

The next 24 hours would see the start of Ramadan, in Syria such an important and happy time, the time for families to come together, more about the food than the fast. Syria is overwhelmingly Muslim but moderate, Ramadan is more a cultural celebration, more like Christmas in Europe. For many it’s the only time they go to the Mosque, that is until the beginning of the revolution when the mosque became the only place a crowd were able to gather. The fast is more often than not followed by a feast with visiting family and friends all through the night, going out to restaurants for the pre dawn meal of Suhur. By the time Abu Tableh comes around banging his drum in the early hours most have not even gone to bed.

This year was always going to be different, food prices have risen and the cost of cooking gas has trebled. There were little sign of any preparation. The pounding of suburbs east of the city continued on and off all day, several large explosions too.

The Old City was almost completely deserted, a few grocery shops open, a few shopkeepers who had not been home in days. The only people about were local residents. Generally things were calmer around most of the city, the rubbish that had not been collected for a couple of days and was beginning to reek was being cleared. Raslan, Osama and Hasan – the kids in my alley – were using wheelbarrows to cart it off elsewhere. As night fell there were still echoes of what was going on further away, a gun battle that sounded quite close only lasted a few minutes, then very little.

The rest of the week passed relatively peacefully. We can still hear the sound of clashes and explosions from time to time but for the most part things feel better, for how long we do not know.

So many Syrians are suffering now, so many are scared, so many would like to leave but have no option but to stay. For now I will also stay, as long as I can. My heart goes out to every single Syrian who has been effected by this terrible conflict, and so many have.

Ramadan is underway and people are determined to carry on regardless, the mood is sombre and not one of celebration as it should be. More people are out and about, the rubbish is being collected, the markets have food. But still people are afraid, everyone knows there is more to come, many are leaving. Most are just praying for peace.