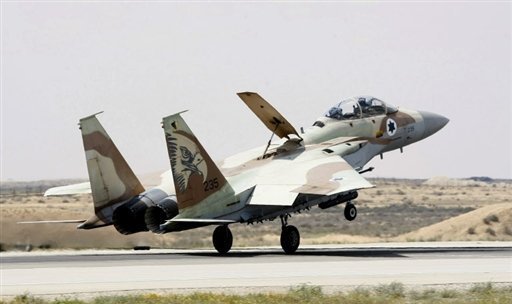 Talk of a possible military strike on Iran’s nuclear facilities dominated the Israeli press on Friday, a day after Defence Minister Ehud Barak said the issue had become more “urgent.”

“(Prime Minister Benjamin) Netanyahu and Barak are determined to attack in Iran in the autumn,” trumpeted a front-page headline in top-selling daily Yediot Aharonot.

According to Nahum Barnea and Shimon Shiffer, two of the paper’s most senior writers, if Netanyahu and Barak were to decide on their own, they would likely order an attack on Iran’s nuclear facilities “in the coming months of autumn, before the US elections.”

“There is immense significance to the fact that these two senior figures, the prime minister and defence minister, are determined to take the decision,” they wrote.

“It is no less significant that not one senior official in the establishment — not in the military, nor in defence establishment, nor even the president (Shimon Peres) — currently supports an Israeli attack.”

The Haaretz newspaper led its weekend edition with an unnamed Israeli official warning that Israel was currently in greater danger than before the 1967 Middle East war.

And the Maariv newspaper’s front page highlighted an opinion poll which found that 37 percent of Israelis believe a nuclear Iran could lead to “a second Holocaust.”

Netanyahu has warned that weapons of mass destruction in the hands of “Iran’s Ayatollah’s” could lead to “another genocide,” and President Shimon Peres said that Iran’s President Mahmoud Ahmadinejad was “threatening a new Shoah,” the Hebrew word for Holocaust.

Israel, the sole if undeclared nuclear power in the Middle East, says Iran’s nuclear programme poses an existential threat, and has repeatedly refused to rule out military action to halt Tehran’s nuclear activity.

Just three months before US President Barack Obama seeks a second term, his administration is loath to launch a new US war in the Middle East and wants to give time for newly strengthened sanctions to work.

Iran refuses to bow to Western demands that it curb its sensitive uranium enrichment under the pressure of punishing economic sanctions that were ramped up in July to their toughest level so far.

Tehran has demanded that its “right” to enrichment be recognised and that the sanctions be eased, and rejects Western suspicions that it is seeking a nuclear weapons capability, insisting its ambitions are entirely peaceful.

A series of visits by high-ranking US defence officials to Israel has raised speculation that Washington is trying to dissuade Israel from a pre-emptive military attack.

In a Thursday interview, Barak said that a recent US intelligence report made the Iranian issue more “urgent.”

Regarding the differences between Israel and Washington, “the discourse is much less black-and-white than what is thought,” he said.

He also said that a decision on a military strike on Iran’s nuclear facilities would necessitate a vote in the Israeli government, which currently has 29 members.

“The image created in the public realm, as if two men sit and conjure fantasies or reach decisions on their own is absolute malarkey,” Barak said. “Only the government can decide on such issues.”