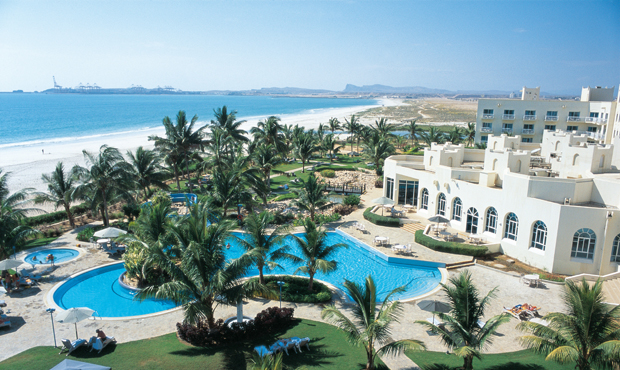 At first glance, Oman seems to have it all – beautiful beaches, grand hotels, bountiful oil wealth – but behind the glamor lurk some uncomfortable issues regarding the sustainability of its economic growth.

The high oil prices have helped to strengthen Oman’s fiscal and external balances. Its economic growth is projected to be 5% this year and inflation has remained moderate. The government is investing in public programs such as a rail network, new air and sea ports, as well as education and social infrastructure.

Though these measures are encouraging, in the long term Oman faces serious challenges in sustaining its growth due to its dependence on oil revenue, which is being used to quell its other looming problem – unemployment.

“The economy is in good shape because of high oil prices. The problem with oil is that it is finite and Oman’s oil production has been falling for quite a few years. Oil will not last in the long term. The alternatives are few,“ said Dr. J E Peterson, a political analyst specializing in the Gulf region.

With changes underway in the region due to the Arab Spring, the government has taken measures to placate its people by creating public sector jobs and raising wages. High oil prices have provided enough revenue for such investments in the past but domestic oil production is projected to decline and given the current global economic slowdown there is a risk that prices will stagnate or fall.

“The fear that I have is that because of the global economic slowdown, the recession in Europe, and the economic slowdown in China and elsewhere, oil prices are not going to increase,” said Dr. Zubair Iqbal, adjunct scholar at the Middle East Institute in Washington DC.

“The challenge is that oil prices may not increase significantly and if production declines the budget will come under pressure. If the budget comes under pressure the government will not be able to generate employment opportunities in the public sector.  Finally, if the public sector is not growing fast enough, then unemployment will become a huge issue as unemployed people account for about 25% of the workforce,” he said.

Given the long term implications of declining or stagnant oil prices Oman faces the challenge of trying to diversify its economy while creating jobs in both the public and private sectors. In 2010 total public sector employment was 164,000 (excluding defense and security) and increased by another 44,000 people in 2011. Wages for public sector workers also increased by over 30%, putting pressure on the budget. Such rapid growth in government expenditure will only be sustainable if oil prices increase by 2.5-3% each year and given the global economic slowdown this is unlikely.

The government’s decision to increase public sector wages by 30-40% has not only increased pressure on its budget but has also proved to be a hindrance to private sector growth. In order for economic diversification to take place, opportunities need to be created in the private sector. The increase in wages in the public sector has made it difficult to attract investment and create employment opportunities.

“Either they will not invest domestically in Oman and go somewhere else where wages are low or they’ll import workers from elsewhere. The challenges will become worse because the government has taken certain policy measures that are not appropriate which have now created a problem and have created a barrier to increasing employment opportunities in the private sector,” said Dr. Iqbal.

If the government seriously pursues economic diversification it will have to find a way to lower wages while trying to avoid a political backlash. It will also have to find industries that are labor intensive to reduce unemployment but also have the capacity to produce significant revenue.

“The problem is that oil is a very capital intensive industry and doesn’t employ a lot of people. Most people are employed by the government. They’re either in the security forces or civilian government and they’ve reached their limit of gainful employment.  The private sector employs some Omanis but still a lot of expatriates particularly in terms of unskilled or semi-skilled industries and they do so because its cheaper,” said Dr. Peterson.

There are industries such as tourism that have seen significant growth in recent years.  That is a labor intensive industry, but it hasn’t generated the kind of revenue needed to shift from the oil to the non-oil sector. Problems in other countries in the region have attracted tourists to Oman but as things normalize in countries such as Egypt and Lebanon, this growth in tourism may even taper off.

This is not to say that economic diversification is unachievable, but it requires the government to devise a realistic long-term plan. It will take time, however, to develop industries, cultivate new skills in the labor force, and attract investment to the private sector. The outcome will depend on the urgency with which the government pursues a strategy towards diversification and its ability to tackle the wage issue that is hindering private sector growth.

“They ought to be in a position to create a strategy for the next eight to ten years where they will be able to sustain a substantial reduction in oil revenues, but they have to start working on it now,” said Dr. Iqbal.