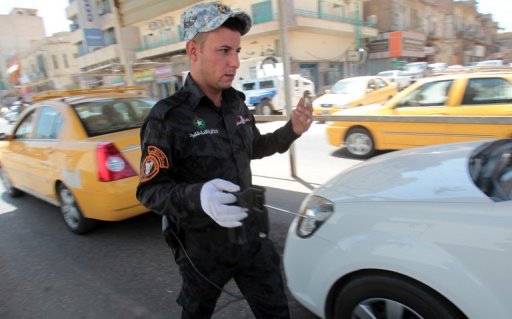 An Iraqi soldier walks past a line of cars at an entrance to Baghdad’s heavily fortified Green Zone, looking for the silver antenna of the bomb detector he holds to swing left, indicating a threat.

But however closely the camouflage-uniformed soldier watches the plastic pistol-gripped “detector” as he paces slowly past the cars, it will not lead him to any bombs or weapons, except by chance — it, like others used at checkpoints across Baghdad and elsewhere in Iraq, is worthless.

Evidence that the devices do not work has been available for years, but that has not stopped Iraq from continuing to employ them at checkpoints across the country, including those guarding highly sensitive areas such as the Green Zone, where the Iraqi government is headquartered.

Though violence in Iraq is down compared to past years, the country is still plagued by bombings and shootings, which killed 325 people in July, according to official figures — the highest monthly toll in almost two years.

And attacks during the holy Muslim fasting month of Ramadan, which began in July and ended in August, left at least 409 people dead.

Faced with such conditions, Iraq cannot afford to rely on non-functioning equipment, but it does, with security forces using the “detectors” to determine which vehicles need extra scrutiny at checkpoints.

The ADE 651 “bomb detectors” in use in Iraq were made by British firm Advanced Tactical Security & Communications Ltd. (ATSC).

It made a number of fantastical claims about the devices, including that they could pick up substances ranging from explosives to ivory at up to 1,000 metres (3,280 feet) on the ground or 3,000 metres (9,842 feet) from the air, using credit card-sized “sensor cards”.

The reality, however, proved to be rather different.

In early 2010, ATSC director Jim McCormick was arrested in Britain, which banned the export of the ADE 651 devices to Iraq and Afghanistan.

Britain’s Department for Business, Innovation and Skills said that “tests have shown that the technology used in the ADE 651 and similar devices is not suitable for bomb detection.”

But government spokesman Ali al-Dabbagh told AFP about a month later that the inquiry had found that “more than 50 percent are good, and the rest we will change,” leaving the devices in use.

Prosecutors in Britain have meanwhile charged six men, including McCormick, with fraud in connection with various types of fake detectors.

“I believe that this device contributed, whether intentionally or unintentionally, to the waste of Iraqi blood, to the shedding of Iraqi blood, because it was not effective to the required degree,” Interior Ministry Inspector General Aqil al-Turaihi told AFP.

He said a report from the Baghdad Operations Command indicated that in one area, the ADE 651, in concert with other security measures, prevented only 19 percent of bombing attacks.

The interior ministry spent over 143.5 billion Iraqi dinars (about $119.5 million at today’s exchange rate) on ADE 651 devices in 2007 and 2008, at a time “when there was a semi-civil war in the country and the terrorists were carrying out widespread bombing operations,” Turaihi said.

“There was an attempt to obtain equipment to prevent these explosions, and this device was offered,” he said.

But “American forces presented reports that this device is not effective,” while oil ministry and ministry of science and technology studies also showed that the ADE 651 did not work.

“We started to investigate this issue, and the investigation continued for a long time because many obstacles were put in front of it,” Turaihi said, without elaborating.

And he criticised the selection of the ADE 651, saying that “this device, like any military device, whether it is used in combat or for preventing an explosion, must be known, and must be from a known company.”

“The exaggeration in prices and the procedures under which this contract was completed point to major corruption in this contract, and the investigations that have been conducted revealed some of this corruption in relation to the interior ministry,” Turaihi said.

Some of those involved in the purchase of the devices were referred to the judiciary and jailed, but “this issue is still open,” as a joint investigation with Britain is ongoing, he said.

Despite all this, the ADE 651 devices are still in use.

At a typical checkpoint in Baghdad, a soldier or policeman stands under a metal-roofed shed erected over the road with an ADE 651 pointing parallel to traffic, “checking” cars as they pass, while one or more others, usually armed with Kalashnikov or M-16 assault rifles, stand by for support.

If the device’s swivelling antenna points to a car, it is usually directed to a second section of the checkpoint farther down the road, where policemen or soldiers ask for identification and may perform a cursory check of the vehicle, generally limited to looking inside the trunk.

But militants in Iraq have years of experience concealing weapons and explosives via more thorough means than putting them in the trunk of a car.

And the near-daily shootings and bombings in Iraq are a testament to the failure of the ADE 651s and the checkpoints where they are used — which cause massive traffic jams that inconvenience commuters — to stem the movement of explosives and other weapons, and keep Iraqis safe.