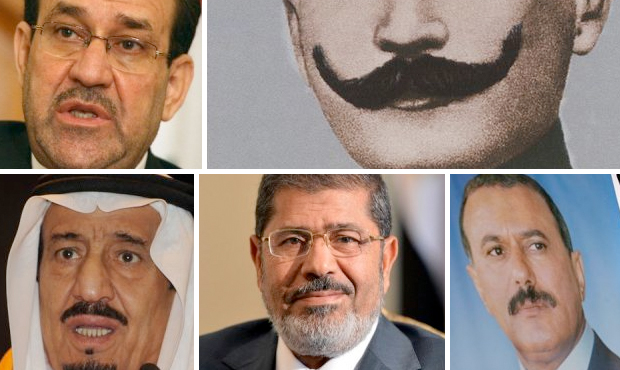 "While it has faded from the ubiquity it once enjoyed among western elites, the mustache largely retains the prominence it has long enjoyed in the Arab World."

Around my senior year in college, I remember, as I was discussing my post-graduation plans with my father, I mentioned that I was getting more and more serious about moving back to the Middle East after graduation. He balked at the idea, though (at least ostensibly) not for the obvious reasons. Rather than citing more common concerns of safety and the like, he instead pointed to my lack of facial hair.

While it has faded from the ubiquity it once enjoyed among western elites, the mustache largely retains the prominence it has long enjoyed in the Arab World. Brandished by men ranging from Gulf royals and Baathist autocrats to civil servants and cab drivers, the mustache is hard to avoid in the region.

Yemen is no exception: indeed, one prominent tribal family literally bears the name Abu Shawarib – the father of the mustache – apparently in honor of the mammoth facial hair of one of their ancestors. Once a Yemeni hits his late teens, it seems, some form mustache is almost culturally mandated. Despite my status as a foreigner and less than impressive facial hair potential, it seems, I’m no exception: my neighbors, in particular, have shown little hesitation in criticizing my appearance after I shave. A thin mustache, it seems, is vastly better than no mustache.

As in the rest of the region, the facial hair thing can be rather politicized here. Some of the prophet Mohamed’s hadith – roughly, traditions and sayings – give the impression that he was pro-beard and, consequently, anti-mustache, and in the Arab World, beards have become irrevocably associated with political Islam; a Yemeni friend’s decision to grow a beard, largely out of laziness, ended up scaring the hell out of his socialist parents, who immediately drew the conclusion that the facial hair was a sign of something far more consequential. According to the far from universally true stereotype, one can read a Yemeni man’s politics through his facial hair.

But more than anything, it often seems, a bold mustache is an indication of power. Saleh’s mustache was one of the few constants in his three decade rule: when he finally appeared on television mustache-less after traveling to Saudi Arabia for medical treatment after being injured in an assassination attempt, many took the absence of the former president’s trademark facial hair as a sign of his tenuous grasp on the seat of power. General Ali Mohsen, a longtime Saleh ally who defected last March, has similar, if thinner, facial hair; both Ali’s jointly faced off against another mustachioed Ali, secessionist former vice president Ali Salim al-Beidh, in Yemen’s 1994 Civil War.

As he took power, current president Abdo Rabbu Mansour Hadi’s lack of facial hair became the subject of many jokes. Notably, I remember, a number of posters of Hadi were defaced with hastily drawn mustaches: in the eyes of some Yemenis, Hadi’s conspicuously empty upper lip only served to confirm perceptions that he would prove to be a weak leader. But while few mentioned it at the time, the jests about Saleh’s successor’s facial hair – or rather, lack thereof – drew my mind elsewhere, to former president Ibrahim al-Hamdi. Though he rose to power via a military coup, Hamdi opted against brandishing the facial hair that almost adapted by Arab leaders of the era who rose to power in such a manner – something that, looking back, seems to underscore his reputation as an understated, humble man.

Less than six months into his term, the jury is still out on Hadi. But if he manages to push back skeptical forecasts painting his presidency as little more than a cosmetic change in leadership, Hadi may alter Yemeni politics in an even more unexpected way, inadvertently pushing back against associations of facial hair and forceful leadership – of mustaches and manhood – that often seem to be written in stone.

Adam Baron is a freelance journalist based in Sanaa, Yemen. His work has appeared in numerous outlets in the United States and the United Kingdom, including McClatchy Newspapers, the Christian Science Monitor, Foreign Policy, Sports Illustrated, the Telegraph (UK), and the Independent (UK). He has been interviewed by CBS Radio, NPR and various arms of the BBC.