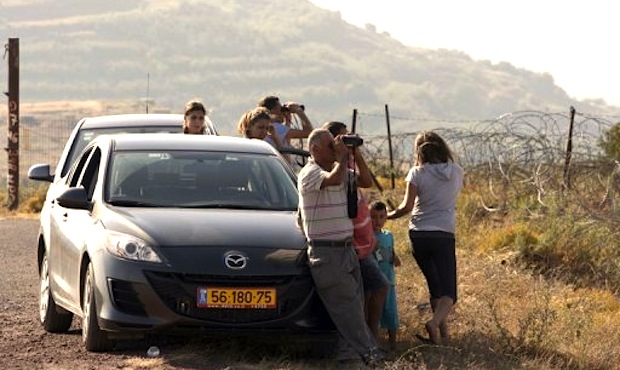 "Despite their activity, the anti-regime organizers in the Golan Heights have not attracted mainstream local support for their movement."

Three evenings a week, Syrian dissidents gather in a borrowed office in the bustling town of Majdal Shams. The diverse attendees – Facebook organizers, graffiti artists, former political prisoners, artists and writers – come together to coordinate a local contribution to the ongoing uprising against Bashar al-Assad. Some nights, they spend hours debating the news, brainstorming protest slogans, and strategizing for weekly demonstrations in a nearby plaza.

Such meetings have become commonplace in many Syrian cities and Syrian diaspora communities worldwide. The activists in Majdal Shams are, however, distinct. They live under Israeli rule in the Golan Heights; 1.800 square kilometers of Syrian territory that the Jewish State has occupied since 1967. The Golani activists consider themselves Syrians, and international law identifies the Golan Heights as Syrian land. But, unlike their counterparts in Damascus or London, few have experienced Bashar al-Assad’s rule firsthand.

When Israel conquered the Golan Heights in the 1967 Six Day War, most of the region’s estimated 130.000 civilians fled or were expelled from the territory. The few thousand who managed to remain (mostly in Majdal Shams and a few surrounding villages) subsumed their political differences into a unified struggle for a return to Syrian rule. For decades, opposition to Israel’s occupation was the community’s only significant political movement.

Local protests against the Israeli occupation regularly included patriotic declarations of support for the Assad regime. But when anti-regime protests erupted in the Syrian city of Dara’a, fewer than 40 kilometers from the Golan Heights, local activists felt compelled to show solidarity with the demonstrators. A small group composed a manifesto in support of the uprising that declared, in part, “everyone who attacks our people, the Syrians, is an enemy.” More than a hundred local residents signed the document, and a few dozen attended a follow-up anti-Assad rally in downtown Majdal Shams.

The manifesto and the rally were groundbreaking. Signatory ‘Amar Ibrahim said that, in the past, a small council of unelected religious leaders had composed political manifestos that claimed to represent the opinions of the general population. Now, a group of private citizens had organized and declared their own independent beliefs. “It was new for us… it was not usual for people in the Golan to stand… against Assad,” Ibrahim said.

Shahadhi Nasrallah, one of the lead anti-regime organizers in Majdal Shams, said that he and other activists were deeply moved when thousands of Syrians commented on Facebook photographs of the anti-Assad demonstration. The posts marveled that Syrians who faced foreign military occupation also opposed Bashar al-Assad. Nasrallah said that regime opponents in the Golan Heights realized that they could have a “huge influence” on their compatriots across the ceasefire line.

In the following months, individual Golani activists formed close links with their counterparts throughout Syria. One attended international conferences of the Syrian opposition in Turkey, France, and Egypt. Others formed an anti-regime Facebook group to publish news about the uprising and solidarity messages from the Golan Heights. Some began to work virtually with activists on the ground in Syria by editing video footage and images of the uprising and publicizing them online.

The activists continued to express their support for the Syrian uprising within the Golan Heights. In the winter of 2011, the group organized a second anti-Assad rally in Majdal Shams that drew approximately 150 demonstrators, according to Nasrallah. They purchased a set of revolutionary Syrian flags and planted one on the mountainside above the town. And a committee of five young activists began spraypainting anti-regime slogans along the main streets.

In early summer, as the situation in Syria descended into a bloody civil war, the organizers stepped up their activities. They began to hold tri-weekly meetings and weekly demonstrations on Friday evenings in Majdal Shams. They studied YouTube footage of protests in Dar’a and other cities to learn local chants and slogans. Their rallies grew steadily, from a few dozen attendees in early June to a peak of more than 150 in late July.

Despite their activity, the anti-regime organizers in the Golan Heights have not attracted mainstream local support for their movement. Support for Assad remains strong in Majdal Shams and the surrounding villages, even as the civilian death toll in Syria rises (some residents said that the death toll was exaggerated; others said that the crackdown was a necessary price for long-term security).

Many of the Syrians in the Golan Heights genuinely support the current Syrian regime. Most of the population adheres to the minority Druze religion (a faith that grew out of Shi’a Islam in the 11thcentury). Many are grateful to Bashar al-Assad for promoting a secular national identity for Syrians and maintaining stability in a region devastated by sectarian strife.

Some receive tangible benefits from the Assad government. Every month, the regime issues salaries to the dozens of Golan Heights residents who were employed by the state before 1967. Since the early 1990s, thousands of local students have received full-tuition scholarships to attend the public University of Damascus, with many earning lucrative and respected degrees in medicine or dentistry.

Other residents publically endorse the regime for pragmatic reasons. Some fear that their relatives living in Assad-controlled territory could suffer reprisals if they endorse the uprising. Others worry that, if the Golan Heights returns to Syrian rule, the regime could punish the population for disloyalty.

Perhaps most important, many residents feel that organized opposition to Assad hampers the continuing struggle against Israeli rule. Disagreements over the uprising in Syria divide anti-occupation activists, weakening the movement. And criticism of Assad puts regime opponents in an uncomfortable alignment with the Israeli state, which loudly criticizes human rights violations in Syria.

The anti-Assad activists in Majdal Shams realized the extent of local opposition to their activities in early summer 2011. After a local activist declared his opposition to the regime on international television, the influential Druze religious council in the Golan Heights declared uncompromising support for Bashar al-Assad. The group called on local residents to refrain from all social or business contact with any individual who supported the “conspiracy” against the Assad regime.

Many of the activists dismissed the boycott call. When a local news website published the council’s manifesto, a number of residents posted comments declaring their opposition to Assad and willingness to endure social and economic ostracization for their political beliefs. Nasrallah said that the boycott was “not a big deal for me, I think they have the right to do whatever they want.” But, according to Ibrahim, many individuals who had signed the activists’ original anti-Assad manifesto removed their names from the document to escape the community boycott.

A few months later, the religious council rescinded the boycott. Local opposition to anti-Assad activism continued along other channels. Regime supporters painted over the revolutionary graffiti in Majdal Shams. Some attended anti-regime rallies and verbally harassed the protestors.

On a few occasions, local opposition to anti-Assad activism has become violent. In winter 2011, a crowd of more than 100 regime supporters—some armed with sticks—forced anti-Assad demonstrators out of the main square in Majdal Shams. In late July, a group of regime supporters blocked an intersection in the central parts of town to prevent activists from leaving their weekly demonstration. At the resultant hour-long standoff, crowds of regime supporters and opponents yelled slogans and flung eggs and other makeshift projectiles. Only the intervention of volunteer peacekeepers (who stood between the two sides) prevented a street battle.

Several anti-regime activists said that they face even greater threats. They repeatedly referred to their local opponents as “shabiha”– the paid thugs who disrupted anti-regime protests in Egypt and other countries. Nasrallah said, “there are shabiha here in Majdal Shams that could… fight with me or kill me.” Other organizers said that a vocal regime opponent who was struck by a speeding car while crossing a busy street was deliberately targeted for his political beliefs.

For their part, anti-regime activists said that their opposition to Bashar al-Assad was connected to their community’s resistance to Israeli occupation. Several said that the regime and Israel had made a secret pact exchanging Israeli rule of the Golan for peaceful relations between the two countries, and that Assad’s overthrow could pave the way for an Israeli withdrawal for the territory.

Still, organizers said that the Israeli government exploited the local anti-Assad movement to pressure residents to sever ties with Syria. Since the late 1990s, the state has employed a former member of the community. Nasrallah said that this envoy “tried hard” to join the team of anti-Assad organizers in Majdal Shams, possibly in the hope that the activists’ criticism of Assad’s dictatorship would dampen local enthusiasm for a return to Syrian rule.

So far, Israel’s efforts have not succeeded: anti-regime activists in the Golan Heights remain staunchly opposed to Israel’s occupation. ‘Amar Ibrahim said, “no one can say that living here under the Israeli control is better than living there… in spite of being there under a dictatorship regime, you’re still living in your own country, your own language, your own flag… living here in Israel with the democracy law does not replace living in your own country.”