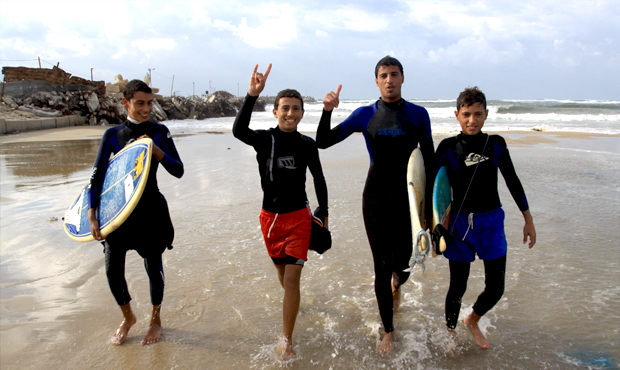 With his board tightly tucked in beneath his arm, Ahmed Mousa makes a run towards the ever-stretching sea of Gaza calling out for the others to join in.

Ahmed and nearly 40 other young Palestinian men between the ages 20 to 30 have managed to put the hardships of their lives aside by riding the waves of the Gaza sea.

“Despite the daily challenges we all face here in Gaza, the peaceful beaches here have the tendency of drowning our worries; even if it’s for a little while. I particularly have some sort of connection with the sea,” Ahmed said.

“The couple of hours of the happiness and freedom I experience as I surf is more than I can ever ask for. The waves seem to take me in with wide arms; flushing all my sorrow away,” he continued, breathing heavily from the effort exerted in surfing just minutes before.

Many, if not all of these men, who mainly live in refugee camps, are unemployed. Having plenty of free time on their hands, surfing is the best thing to do. According to the United Nations, more than 45% of Gaza’s 1.5 million residents are unemployed.

“What distinguishes me from the other bums around here is the way I spend my time. Instead of sitting around sobbing about my fate, I do something that I love and fill my time with, I surf,” Ahmed said proudly.

The sea has always been of great value to the people of Gaza, from the native Gazans to the refugees in the northern coastal cities. Caged up in a strip no bigger than 360 square kilometers due to the Israeli blockade, the people find no better place than the Strip’s ever-stretching sandy coastline.

Riding the tides of the Gaza sea is clearly one of the few joys for these surfers. Nevertheless, complications still manage to track their every step; even to their only source of happiness.

The surfers have no choice but to make their way around the sewage and litter that is scattered all over the beach. The sea surrounding Gaza is believed to be polluted with at least 60 to 80 million liters of sewage traced from Wadi Gaza, a natural wetland in the center of the strip, every day.

“Although we’ve got no other choice but to make the best of it, surfing certainly is not the same with all this waste floating around. Some days are better than others; as are areas. However there are times when we have to turn back and leave it for another day when there is less pollution,” said Mohammed Abu Ramadan, the coach of Gaza’s small surfing club.

Today, the surfboards, worn out and in terribly bad shape, are still constantly being used. With the Israeli blockade restricting humanitarian aid, supplying Gaza with surfboards seems like an almost impossible task.

Revealing a battered board, Ahmed said that “most of the boards we own are in pretty beat-up shape. It’s scary knowing that the board underneath you may not be able to hold you up. According to past experience, repairing the boards just won’t do the job since we don’t have the tools and equipment necessary to restore them back to the way they were.”

“I would do anything for a shiny new board,” he concluded gazing at the sun setting over the ocean’s gold and red horizon.