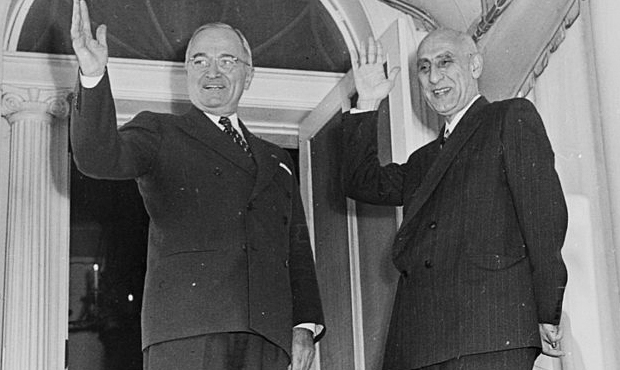 Mohammad Mossadegh was Prime Minister of Iran for only two years in the early 1950s, but he has left a lasting mark on the country and the Middle East as a whole. Holly Dagres visited his ancestral village.

In the Giza governorate of Egypt the Mossadegh Street is of no significance to most, although its Iranian namesake has left a lasting imprint on Egypt’s political history. Without Prime Minister Mohammad Mossadegh’s influence, Gamal Abdel Nasser might not have nationalized the Suez Canal. But this story is not about Egypt, it is about the legacy of a man who changed the course of the Iran’s political future.

Many Iranians are seemingly convinced that Mossadegh was indeed a communist and rightfully overthrown to save the Pahlavi throne. According to New York Times journalist Stephen Kinzer’s highly readable book All the Shah’s Men: An American Coup and the Roots of Middle East Terror this is not the case. Rather, he portrays Mossadegh as an aristocrat who despised socialist and Marxist ideas. Kinzer views the coup as one of the leading causes of anti-Western sentiment in the Islamic Republic today as well as one of the main reasons behind the US Embassy takeover in 1979.

Mossadegh served as prime minister of Iran (1951-1953) under the Pahlavi dynasty and was Iran’s last strain of democracy; the country never has yet to see past the constitutional monarchy-turned-dictatorship. He firmly believed in the concepts of nation building and modernization, envisioning a free and democratic Iran. He sought to do this by ending the control of Iran’s oil reserves by the Anglo-Iranian Oil Company (AIOC), owned by the British government, which refused Iran any significant share of the high profits from oil.

In 1951, with the unanimous support of the Iranian parliament, Prime Minister Mossadegh nationalized AIOC, now known as BP (British Petroleum). The nationalization created an international dispute, causing the British to sanction Iran economically and even threaten with war. Mossadegh travelled to the United Nations and made a plea to the Security Council for what he thought constitutionally belonged the Iranian people. This led to him gracing the cover of Time Magazine as ‘Man of the Year’.

The British sought a way to get back what they deemed was rightfully theirs. Realizing they could not do it alone, the UK’s MI6 intelligence agency conjured up a plan that would convince the Americans to get on board with his overthrow by labeling Mossadegh as a communist. This worked well as the ‘Red Scare’ was a dominating factor in US foreign policy at the time. Under the name Operation Ajax, the CIA with the help of MI6 carried out its first coup d’état. In December 1953, Mossadegh was tried in court and convicted of treason.

In his defense, he said: “Yes, my sin – my greater sin… and even my greatest sin is that I nationalized Iran’s oil industry and discarded the system of political and economic exploitation by the world’s greatest empire… This at the cost to myself, my family; and at the risk of losing my life, my honor and my property… With God’s blessing and the will of the people, I fought this savage and dreadful system of international espionage and colonialism… I am well aware that my fate must serve as an example in the future throughout the Middle East in breaking the chains of slavery and servitude to colonial interests.”

Mossadegh spent some time in prison and was eventually sentenced to house arrest in Ahmad Abad, his ancestral village some 100 km from the capital Tehran. After about a decade, he passed away and was buried in his home on March 5, 1967.

Ahmad Abad is a quaint village and without proper directions from Tehran you can get lost – up until a point. From the outskirts of Tehran onwards, everyone is familiar with it. Stopping to ask for directions at a local Red Crescent office, one worker exclaimed, “Mossadegh’s Ahmad Abad?”

Given how subtle but intimidating the gate to his villa in Ahmad Abad is, it is certain what is hidden behind its doors still creates angst until this day. The turquoise green gate is deceiving, as there is no house number and only a doorbell. On my visit, I rang it a couple of times until a woman in chador appeared and opened it for us. It went without explanation why we were there.

Madar joon (‘Mother Dear’), is the daughter of Mossadegh’s cook and now the caretaker of his property. “We get 5-6 families on Thursdays and Fridays who come from all over the place to pay their respects,” she explained.

We walked the rocky pathway lined up by a garden of elm trees that led to a modest brick villa. “Why is it so difficult to locate his compound?” I inquired. “They (The Islamic regime) do not want people to know he’s here to arouse nationalism again.”

She pointed to an empty plot of land against the wall, “That’s where the guards stayed while he was under house arrest.” I curiously asked if the Shah ever visited his nemesis — not a chance.

The assumption was that years of confinement would be in a home with furniture, books, and so forth — but was not the case. A door was opened and there lied his tomb in the middle of an off-white room adorned with photos of Mohammad Mossadegh. His grave was uplifted and covered with Iranian tapestry, two beautiful crystal lamps, and piles of prayer books. If you did not pay attention, you would think it was a makeshift table.

“People like to pray here, it’s a pilgrimage site for some,” Madar joon commented on the prayer books.

Mossadegh was never allowed a proper burial elsewhere; the Shah feared it could become a gathering point for the opposition. His body was buried without the traditional Muslim ceremony conducted for the dead. He requested that no gravestone be marked where he lay. The area we were standing in was once his dining room. As humble as the space appeared to be, the entry way and windows both shined light from the outside, giving it a holy aura and the feeling of a shrine.

My friend asked, “Did he leave this world content or resentful given what happened?” Mardar joon did not have an answer. What is clear though, is that Mossadegh left an impression on the world he lived in.

“By the passage of history, the visage and legacy of Mohammad Mossadegh has only gained in stature and significance. No wonder that monarchist revisionists altogether deny the coup and accuse Mossadegh of populism, while the Islamic republic, beginning with Ayatollah Khomeini himself has consistently downplayed or distorted the legacy of Mossadegh in the nationalization of Iranian oil, and exaggerated the role of the clergy, while new evidence are now surfacing implicating the clergy itself in the coup,” wrote Dr.Hamid Dabashiof Columbia University in an opinion piece on Al-Jazeera.

What Mossadegh did for Iran and the outcome he suffered as a result of it was a tragedy. However, the message of nationalism he carried was not about his loss of power, but the downfall of what he aspired for his homeland. Although Mossadegh has passed, his message lives ever so strongly. As journalist and analyst Robin Wright noted, “Persian nationalism is among the strongest forces in the world. If you know a Texan, add 5,000 years and you’ve got Persian nationalism.”

No matter how hard some attempt to tarnish the memory of Prime Minister Mohammad Mossadegh, nationalism thrives and will make itself known again when the time is right. To outsiders and regimes, old or new, nothing is more daunting than a sleeping lion.