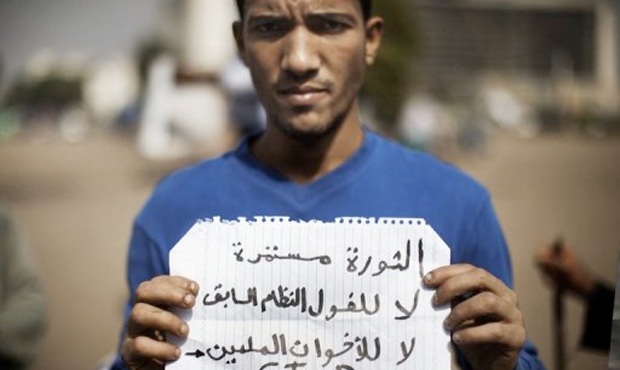 In essence, the Arab Revolution only managed to change political systems and not societal behaviors and mentalities, writes Marina Chamma.

Nobody with the smallest amount of common sense should disagree that the reactions to the “Innocence of Islam” movie were simply senseless. Of course, it could have remained violent and lawless, had it not been for the sad unfolding of events in Benghazi, which led reactions into the realm of the criminal. Much has already been written and said in this regard. But what got me thinking are some commentators’ views and articles in the Western press suggesting that the violence witnessed in the past days signals some sort of failure of the Arab Spring or Arab Revolutions, if only because the most severe violence is taking place in post-revolution countries.

Failures of the Arab Revolution have been apparent in the past couple of months, if we observe the ways in which post-revolution countries have been dealing with the transition from dictatorship to democracy. Things weren’t looking particularly bright as reports of official behavior reminiscent of old days or the restricting of freedoms that existed under deposed regimes surfaced one after the other. In Tunisia, the government issued an arrest warrant against the head of a private TV station for airing a parody show critical of the government’s performance; a secular activist and blogger was arrested for drinking alcohol during Ramadan. Examples of setbacks abounded in Egypt, with warnings to anti-government protesters from taking to the streets, the saga against opposition Al Faraeen TV station and Al Dustour newspapers and the selective release of political prisoners. All these represented true setbacks of the Arab Revolution, where governments seemed to punish certain behaviors, certain freedoms, just because they were remnants, sometimes representing the secularism, of the old regime. It also represented a setback insofar as governments quickly forgot the decades of oppression and humiliation its members had endured and were now engaging in the same excesses they had suffered from and helped fight one year earlier.

But is the current violence a failure of the Arab Revolution? To say so is to say that such violent reactions wouldn’t have taken place under the old regimes, but they did. Most notably in the aftermath of the 2005 publication of the Danish cartoons of the Prophet Muhammad, although any such incident as the death of a U.S. Ambassador would have been unthinkable back then. So is it a failure because the Islamists it democratically brought to power didn’t not stop the chaos? Maybe, but then we would be contradicting the very essence of what the revolution sought to promote, democracy. So is it a failure because it wasn’t able to instill some degree of open-mindedness and restrain unto populations upon an attack on their God? Perhaps, but that would be saying that the revolution aimed at instilling such values, something that was never part of its aims in the first place. In essence, the Arab Revolution only managed to change political systems and not societal behaviors and mentalities. As such, fellow Beirutspring blogger Mustapha Hamoui couldn’t have put it better, encapsulating the voice of reason on why such reactions are senseless and counterproductive.

However, what I do believe is a failure of the Arab Revolution that facilitated the madness of the reactions is the vacuum that the current countries in transition are providing for fundamentalist groups, possibly including Al Qaeda. Such groups revel in such lawlessness to show their ugly faces, both to attack the West, as well as to gain new supporters in countries where the state is still unable to provide for a decent livelihood to its people. Al Qaeda certainly didn’t enjoy seeing its popularity and raison d’être being hit as a result of the Arab Revolutions, and it certainly won’t accept its slow demise without putting up a fight.

So for me, I consider the violence a result of the failure of Arab ways in dealing with attacks on religion, more than a failure of the revolution itself. The Arab Revolution – the aftermath of which fell in the hands of Islamists – will truly fail insofar as it allows extremists to hijack its successes, just as many believed the Islamists hijacked the revolution from the secular Arabs in the first place. But it would be reckless to abandon these countries now, as the stakes of a potential failure and its consequences have never been higher.

And while everyone was busy with that ridiculous movie, Bahrain keeps running around in circles with its revolution, Lebanon is always on the verge of something, and Syria continues to burn…

This article was originally published on Eye on the East.

The views expressed in this article are the author’s own and do not necessarily reflect those of Your Middle East.