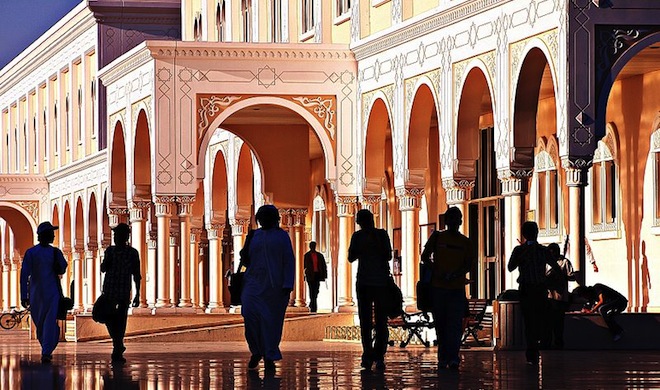 We have put together the ultimate compilation of top universities across the MENA region.

Alexandria University
Became an independent entity in 1942, but got it present name in 1952. Today, it is Egypt’s second largest university. Students will be attracted by its location in Alexandria, a city with a long history and a famous library.
www.alexu.edu.eg

Cairo University
With over 200.000 students, this is the largest university in Egypt. Established according to the Western learning tradition, it was partly intended to counterbalance the influential, Islamic oriented University of Al-Azhar.
http://www.cu.edu.eg/english

The American University in Cairo (AUC)
By many considered the foremost institution of higher learning in the Middle East and Africa. AUC was founded in 1919, and has ever since educated an impressive pool of staff and alumni ranging from members of parliament to a Pulitzer-prize winning novelist.
www.aucegypt.edu

University of Al-Azhar
As the oldest Islamic university in the world, the University of Al-Azhar is a center for Arabic literature and Islamic (Sunni) learning. It occupies a key position throughout the region much thanks to its focus on Islamic religion and culture.
http://www.azhar.edu.eg/En/index.htm

The University of Jordan
The largest and the oldest university in Jordan, and often considered to be the leading university in the country. It hosts a world-renowned institute for Arabic language and literature.
http://www.ju.edu.jo/home.aspx

American University of Kuwait
A small, private university based on the American model of higher learning located in Kuwait City. The language of instruction is English.
http://www.auk.edu.kw/index.jsp

The American University of Beirut (AUB)
AUB is one of the leading academic institutions in the Arab world and dates back to the mid-19thcentury. Located in central Beirut, it occupies a spectacular area overlooking the Mediterranean, offering modern sporting facilities such as a football pitch and a private beach. AUB has an impressive pool of alumni, including a number of Prime Ministers.
http://www.aub.edu.lb

The Lebanese American University (LAU)
As one of many universities in Lebanon based on the American model, LAU is sometimes seen in the shadow of “big-brother” AUB. But LAU offers an equally competitive and qualitative study environment. It has campuses in both Beirut and Byblos.
http://www.lau.edu.lb

Université Saint-Joseph (USJ)
A private Catholic university founded by Jesuits in the late 19thcentury. It has roughly 11.000 students spread out over four campuses in Beirut and three regional university centers outside the capital. The languages of learning at USJ are French, Arabic and English.
http://www.usj.edu.lb

American University of Technology
This is a small university, with 90 staff members and 110 faculty members. Class size does not exceed 30 students, so the atmosphere is intimate. Main campus is located along the Byblos highway.
http://www.aut.edu

American University of Science & Technology
Yet another young university – it was founded in 1994 – with a particular emphasis on providing an American-styled education, in this case focusing on technology.
http://www.aust.edu.lb

Notre Dame University
As the only Maronite Catholic university in the Middle East, Notre Dame certainly has a unique profile. It is committed to following the American model of liberal arts education. The university currently hosts about 6,500 students. Another interesting feature of Notre Dame is its location; the North Lebanon Campus sits on the green hills of the village of Barsa, overlooking the bay of El-Mina Tripoli.
http://www.ndu.edu.lb/index.htm

Qatar University
As the first and largest university in the emirate, Qatar University is “the national institution of higher education in Qatar”. This is where members of the Qatari elite come to get an education; its alumni include news editors and a Minister of Labor and Civil Service Affairs.
http://www.qu.edu.qa

Weill Cornell Medical College in Qatar
Established in 2001, this was the first American medical school outside the United States. It is part of a collaboration with Qatar Foundation within which a number of American universities have set up branch campuses in Education City, in the outskirts of Doha.
http://qatar-weill.cornell.edu

Carnegie Mellon University in Qatar
Another branch campus established by an American university in partnership with Qatar Foundation and Education City. Students will immense themselves in state-of-the-art facilities, and can choose undergraduate programs in business administration, computer science and information systems.
http://www.qatar.cmu.edu

Northwestern University in Qatar
Aims to educate the next generation of journalists and communications professionals. In 2010, students launched the daily digital newspaper the Daily Q. Read an interview with the Dean of the school.
http://www.qatar.northwestern.edu

Texas A&M University at Qatar
This branch campus has a research emphasis on environmental issues, including petroleum reservoir studies, transportation and roads, and advanced water treatment technologies. It has student body of roughly 400, with more than 20 different nationalities.
http://www.qatar.tamu.edu

Virginia Commonwealth University in Qatar
This is a truly unique institution in the region as it specializes in education for the creative professions. Undergraduate programs include Fashion Design, Graphic Design, Interior Design, and Painting and Printmaking. There is also a Master of Fine Arts in Design Studies on offer.
http://www.qatar.vcu.edu

King Saud University
Established in 1957 as the first university in the country not dedicated to religious subjects. King Saud University is a public university, with a large student body of roughly 38,000, which has become the leading institution of higher learning in Saudi Arabia. Languages of instruction vary between English and Arabic.
http://ksu.edu.sa

Damascus University
The largest and oldest university in Syria. The university consists of several faculties spread out over different locations in Damascus. Most courses are taught in Arabic, but foreigners come to study at an institute specialized in teaching Arabic language.
http://www.damascusuniversity.edu.sy/en/index.php

Bilkent University
According to the 2010/2011 Times Higher Education World University Ranking, Bilkent was Turkey’s number one university. This is an impressive feat, being founded in 1984. Bilkent has roughly 12.000 enrolled students and has established close relations with companies and organizations, partly through the Bilkent Cyberpark.
http://www.bilkent.edu.tr

Middle East Technical University (METU)
METU is one of Turkey’s most competitive universities, and most departments accept only the top 1% of the roughly 1,5 million applicants. METU has an extensive network of study abroad agreements enabling about 350 students annually to spend time at other universities. The language of instruction is English.
http://www.metu.edu

Ankara University
The first institution of higher learning to be established in the Turkish Republic. It is a large university; 14 faculties, 7 colleges, 12 graduate schools and as many as 105 undergraduate level degree programs.
http://www.ankara.edu.tr/english

Bogazici University
Has its origins in Robert College, established in 1863, which was one of the first American colleges to open outside the United States. Officially founded in 1971, Bogazici has become one of the most popular universities in the country and offers a competitive study environment. The beautiful South Campus witnesses of the university’s historical roots.
http://www.boun.edu.tr/en-US/Content/Default.aspx

American University in Dubai (AUD)
Initially established as a branch campus for the American College based in Atlanta, AUD is now a fully private and independent university. It has a multi-cultural atmosphere, representing more than ninety nationalities. Its location near the financial districts of central Dubai makes it an ideal spot for networking with potential employers.
http://www.aud.edu

United Arab Emirates University (UAEU)
Established in 1976, the United Arab Emirates University became the first national university of the UAE. Located in Al Ain, also known as the “Garden City” due to its many trees and parks, UAEU has established itself as a strong academic force in the region. It has more than 12,000 students, a new campus underway, and offers programs across 9 faculties ranging from undergraduate degrees to PhD programs.
http://www.uaeu.ac.ae

Abu Dhabi University
Like many other universities in the UAE, this is a new institution, established as late as 2003 to an enrolling class of roughly 1,000 students. That number has now increased to 4,000 and includes 35 different nationalities. The official language is English even though some courses are taught in Arabic.  It is set to open state-of-the art facilities and is underway with a rather unique Bachelor of Science in Aviation.
http://www.adu.ac.ae/en

American University of Sharjah (AUS)
Although younger than its siblings in Beirut and Cairo, AUS has already managed to put a strong mark on education in the region. All courses are taught in English and it offers a wide range of programs; 25 majors, 48 minors at the undergraduate level as well as 13 master’s degree programs. Students might find Sharjah more interesting than its more famous neighbors Abu Dhabi and Dubai – it has become known as a regional center for both commerce and art and culture.
http://www.aus.edu

NYU Abu Dhabi
The Abu Dhabi branch of New York University has received a great deal of attention in the media. Students can feel confident that they will obtain a world-class education, according to some one of the best in the entire region. Despite its young age, NYU Abu Dhabi has already made a strong mark, showcasing itself with a savvy, yet quirky character – simply consider course titles such as Catastrophe, Reinventions of Love, The Human Voice and State and Fate of the Earth.
http://nyuad.nyu.edu

Middlesex University Dubai
Prides itself on being “London’s first and only campus in the UAE”. Established in 2005, it has had some 1,500 graduates and now hosts a student body of roughly 2,000 across 24 undergraduate programs and 7 postgraduate programs, including media, psychology, business, tourism, international development and education. In October 2011, it introduced new MBA orientations such as international business and marketing.
http://www.mdx.ac

Paris-Sorbonne University Abu Dhabi
Université Paris – Sorbonne is one of the world’s oldest universities with longstanding traditions of academic excellence. Its branch in Abu Dhabi promises to carry on the legacy and offers students an impressive state-of-the-art campus roughly 15 minutes from the city center. It has an international atmosphere, attracting more than 60 nationalities. Like its parent institution in Paris, Paris-Sorbonne University Abu Dhabi has a particularly strong foundation in the Humanities and Social Sciences as well as Law and Political science.
http://www.sorbonne.ae/EN/pages/default.aspx