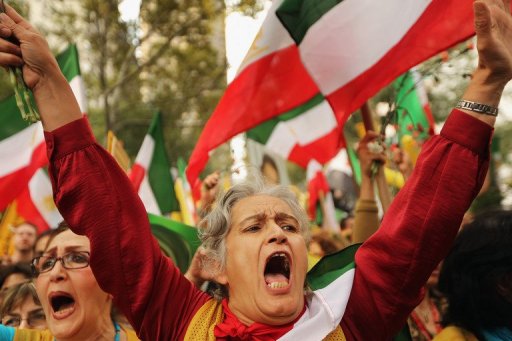 Protesters gathered outside the United Nations on Wednesday to demonstrate against President Mahmoud Ahmadinejad as he made his last speech as Iranian leader to the UN General Assembly.

“Ahmadinejad, no, no, no!” the crowd of several thousand mostly Iranians chanted.

Protesters also praised the US government for its plan to remove an Iranian exile group called the People’s Mujahedeen of Iran, or MEK, from its list of organizations it deems to be terrorist groups.

“The executioner and criminal Ahmadinejad doesn’t represent the Iranian people,” said Zahra Amanpour, to supporters of Maryam Radjavi, president elect of the National Council of Resistance of Iran, of which the MEK is the largest unit.

“We only have one message for the United Nations,” she said. “The ruthless Iranian regime must be expelled from the United nations and Iran’s seat must be handed over to the Iranian resistance.”

Another young Iranian woman, Sarah Jarbandi, 23, called on the Iranian president to stand down.

“We’re here to tell to the world that everything Ahmadinejad will say today at the UN is all lies.

“Our message is: Get out!” Jarbandi said. “We fight to support the struggle of the Iranian people for democracy and freedom. I still have a lot of family in Iran and they witness the oppression of the regime: killing, torture.”

Inside the UN headquarters, the Iranian president said Iran was under threat from the United States and other enemies.

“Arms race and intimidation by nuclear weapons and weapons of mass-destruction by the hegemonic powers have become prevalent,” Ahmadinejad said in a 35 minute speech.

“Continued threat by the uncivilized Zionists to resort to military action against our great nation is a clear example of this bitter reality,” he added in his only reference to bitter enemy Israel.

The Iranian government faces mounting international pressure over its nuclear program, which Western powers say hides a bid to develop a nuclear weapon. Iran says its program is for civilian power generation.

There has been mounting speculation that Israel could launch a military strike against Iran’s bunkered nuclear facilities.