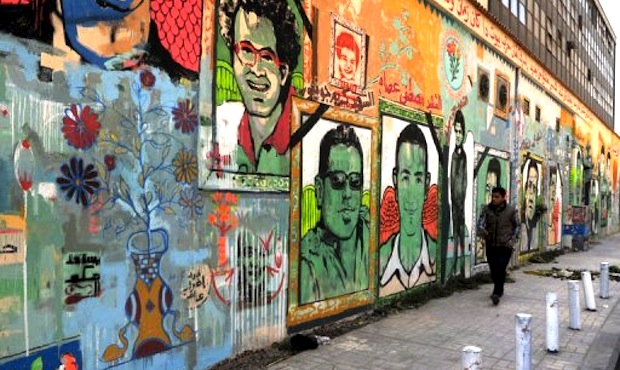 Writer Asmaa Abdallah discusses the challenges and possibilities embedded in the relationship between Egyptian artists and “their” ministry.

A few days after the Mohamed Mahmoud graffiti was whitewashed by the state, causing outrage and concerns among cultural circles and political activists about how Islamists would deal with cultural rights in Egypt, a group of artists came together to discuss the state of cultural policies or lack thereof, in the country.

The five panelists who spoke at Cairo University’s Faculty of Arts on Sunday, are all part of an initiative put forth by the Culture Resource, an attempt to develop a clear and efficient set of policies that would regulate the relationship between the Culture Ministry and artists, redefining the role of the former to monitoring, evaluation and accountability, and hopefully bridging an existing “gap.”

Chairing the discussion was leading journalist and critic Sayed Mahmoud, who traced the roots of the problem back to the fifties when the ministry was first established. “The new culture ministry brought with it the same totalitarian mentality of the July revolution, that lacked the desire or willingness to disseminate culture other than that of the government.”

Mahmoud added that cultural production became centralized, with any non-state art falling on the periphery, except for short periods when few culture ministers, namely Tharwat Okasha, applied their own personal vision. Although much has changed over the past six decades, the ministry’s policies and goals remain unclear, and artists not affiliated with the state remain mostly marginalized.

Contemporary dancer and choreographer Karima Mansour elaborated on how this separation translates into a number of obstacles for independent artists; lack of transparency being a major one. It is extremely difficult to obtain information and more importantly an understanding of the regulations governing cultural production and exhibition from the state.

“Basically for an artist or writer, if you are not affiliated with the government somehow, you get zero assistance or support from the state,” says Mansour, adding that, “since most outlets are government owned and operated, this means you get almost no visibility. It is almost impossible to get your work across.”

Funding opportunities for independent artists was another problem cited by Mansour. Independent artists get little to no funding from the government and are placed under the microscope if they manage to secure their own resources. Surprisingly enough, despite this monopoly over art production, many of the best and most valuable efforts have been independent and not state-sponsored, says Mansour.

But even apart from the black sheep treatment of independent artists, culture in Egypt also faces an existential dilemma; in a country facing huge challenges of poverty and illiteracy, is art even a priority? According to Mansour, yes. “Art is not a luxury. It is not superfluous,” she says. “What the government fails to realize is that art and culture can be used as a soft power. It is as important as education, and can be used as an economic tool. Currently, culture is allocated only 0.22 percent of the state budget, so basically it comes at the very bottom.”

So in an attempt to reform the state of cultural affairs in Egypt, the Culture Resource started in 2009 working on a vision of the role artists would like the ministry to play. The initiative started with a group of 25 artists, activists, university professors and writers. This carried much significance as such initiatives had been mostly monopolized by the ministry.

“What we want is for culture to be considered part of our everyday lives, rather than something produced and consumed by the elite,” explained academic and cultural critic Yasser Allam. After redefining culture, the next thing to do was to create a plan of action.

“The initiative is basically a proposed plan of action that would be passed by parliament, obliging the Culture Ministry to implement a particular policy and be held accountable for it.”

The main principles guiding cultural policy, according to the plan, are safeguarding the identity of Egyptian culture, incorporating a cultural dimension into educational and economic development, as well as institutionalizing values of democracy, freedoms, human rights, sovereignty, transparency, accountability and evaluation. And among the group’s key goals are to allocate 1.5 percent of state budget to culture, decentralize culture politically, administratively, and geographically; restructure the ministry to enable civil society to play a more active role in cultural life; and support the participation of all social and political forces in setting and implementing cultural policies.

Up and coming singer Fayrouz Karawya elaborated on the initiative’s progress on the ground. “Our cultural policy proposal has been submitted to parliament and ironically it was passed the same day parliament was dissolved.” Given that the cultural committee in parliament comprised an Islamist majority, the approval did not fail to raise a few eyebrows. Yet this kind of negotiation is in itself new, as Karawya puts it, as it is coming through parliament and not through executive power.

Karawya highlighted that the initiative started well before the revolution broke out, but that some changes have taken place since; some people were sidelined because of their close ties with the Culture Ministry, and more independent groups joined in.

And according to filmmaker Tamer El Said, the revolution pumped new blood into the initiative. “With the revolution we have a higher chance of making this happen because society is now open to change more than ever.” He added that the only way this initiative can succeed is if it is backed with the voice of the people. Said pointed out however, that the real problem is the gradual marginalization of the role of art, culture and literature in society.

Another risk Said mentioned was the cultural conflict artists are facing with Islamists over identity. “We are the weaker party because we are the minority. We have no institutions or resources to enable us to be an active part in building the collective mind.” According to Said, the Culture Ministry is an “enemy” rather than a partner.

Yet bleak as the picture might seem, the panelists expressed their optimism and hope to make the change they have been working toward. It is no easy task, nor will it be a quick one, particularly since the conflict over the Islamist take on culture, it seems, will last for a while. But after all, as Mahmoud said, “this was a revolution of the imagination above all else.”

The “Revolution and Cultural Policies” panel discussion is part of the Summer Academy Sessions, entitled “Aesthetics and Politics.” This report also ran in the Egypt Independent.

A round-up from EI on recent attempts to shift the culture ministry:

Asmaa Abdallah is a graduate student in English and Comparative Literature at the American University in Cairo and has been writing for English-language publications in Cairo since 2006.