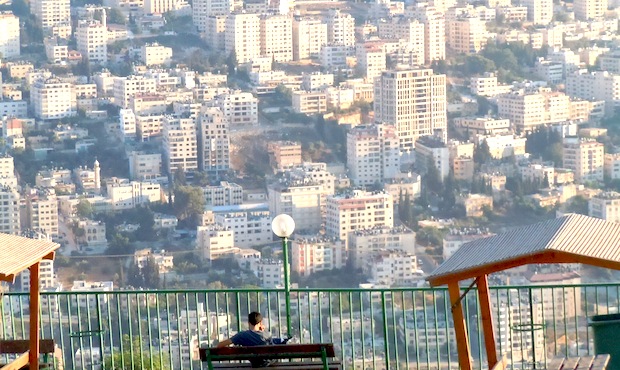 Of the major Palestinian cities in the West Bank, Nablus can often be overshadowed by the financial and political pseudo-capital, Ramallah, or the tourist-packed Bethlehem, or even the southern city of Hebron, besieged by settlers and a focal point for activism. Yet Nablus has its own history of being a center for culture, commerce, and resistance.

Many people, foreigners and Palestinians, perceive Nablus to be a cultural capital of sorts. While Ramallah seems to be a black hole for aid money and investments, with new cafes and bars opening weekly to entertain the multinational population of aid workers, Nablus has remained truer to its “roots.” Having spent time living and working in both cities, I can personally attest to this unique, yet hard-to-describe (with the risk of sounding Orientalist) quality of Nablus. It’s possible to spend an entire day walking and talking with locals without encountering English. The traditional coffee shops, where men gather to smoke argileh and play backgammon, line the streets of downtown, with not a bar in sight (Nablus is a dry city). The old city, similar in style to Jerusalem, supports a thriving souq, which actually is patronized by locals, and not purely tourists. Perhaps the only obvious sign of a Western infusion of money lies in the somewhat out-of-place cinema, which plays American movies and recently boasted an upgrade to “3D.”

Nablus hosts one of the largest refugee populations in Palestine, numbering upwards of 60,000. Within the limits of the city there are no less than four refugee camps: Al-Ein, Old and New Askar, and finally, the largest and oldest, Balata. While the camps are fully integrated into the city, there is a stark contrast between the open streets of the municipality and the sunless alleys of the camps, barely wide enough for one person to pass. As the families of the refugees grew over the decades, the hastily cobbled-together buildings rose quickly, often with one apartment housing families of 10 or even 20. The lack of privacy simultaneously brings the community together as a united front while also having the lasting, and oftentimes negative, effect of separating them from other camps and the rest of Nabulsi society.

As recently as the second Intifada, the refugee camps were a base and shelter for many of the resistance fighters struggling against their Israeli occupiers. As such, Nabulsi residents were often forced to weather attacks and midnight raids from the IDF well into 2007, long after fighting had subsided in other areas of the West Bank. Walking around the Old City, many of the buildings are shells of their former Ottoman-style glory, each neighborhood marking their crumbled walls with posters of their fallen martyrs.

Despite years of hardship through the occupation and the two intifadas, Nabulsis carry on. I found them to be overwhelmingly generous, often most so when they had little to give. In one particularly memorable instance, a female student of mine from Balata camp offered me her snack, insisting I split her food with her when I knew she had not eaten much that day. In another case, one evening at our neighborhood kunafeh (a delicious sweet-cheese dessert for which Nablus is renowned) place, the owner invited us to watch how it was made. He then proceeded over the next hour teaching us how he made his pastries, painstakingly rolling out the paper-thin dough in a manner of open friendliness that has become so indicative of most of my interactions with Palestinians, and especially Nabulsis.

Nablus is physically beautiful, having the distinct natural advantage of being situated between the rolling hills of Mount Ebal and Mount Gerizim. Evidence of the growing city rises in the shells of new apartment or office buildings, their white boxy shape giving the historic city an oddly uniform feel. However, in the twilight hours of the evening when the sun sets on one end of the city, the pink light cast on the western-facing walls of the buildings gives the city an almost magical glow. This marks my favorite time of day, when the peaceful sound of the call to prayer comes over the loudspeaker, the muezzin’s sonorous voice echoing throughout the entire valley. The deep, enthralling invocations are a peaceful reminder of the passage of the day as the hills slowly darken and the lights twinkle on.