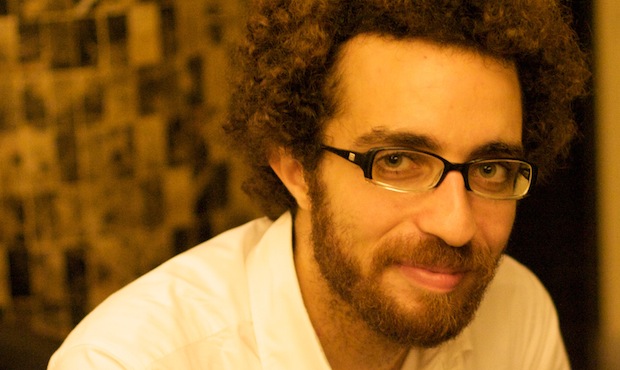 From the works of Ahmed Fouad Negm, now dubbed “the voice of the revolution”, to Tunisians chanting the verses of Al-Qasim Al-Shabi’s If the People Wanted Life One Day, Arab poets have been central to the protests across the Arab world.

One such poet is Palestinian Mazen Maarouf who grew up in exile in Lebanon, having never seen his homeland.

“My grandparents were forced to flee to Lebanon in 1948,” Maarouf said. “I was born in Lebanon, but am still classed as a refugee, and am not even allowed to go to Palestine.” However, Maarouf felt he had to move to a second exile in Iceland in 2011 after writing a series of articles criticising the Syrian regime. This sense of exile, both from Palestine, the homeland he never visited, and from Lebanon, where he grew up, has made Maarouf a ‘psychological refugee’; a feeling that colours much of his work.

From Reykjavik, Maarouf has continued to write and to inspire people in the region. “There is a firm relationship between people and poetry. Poetry has musical qualities which agitates and unifies people in the street,” he said. He also saw the uprisings in the Middle East as inevitable. “If you keep people caged for 40 years, you cannot expect them not to take to the streets at some point. Some people had good deals with the regimes in power. Many others were humiliated.”

Maarouf is disappointed with the turn some of the uprisings have taken, with Islamist parties taking power in Tunisia and Egypt. “It was the liberals who ignited the uprisings, and the liberals have been betrayed,” he said. He remains convinced that this is a transitional phase that will be replaced by a more liberal government later.

“The French Revolution was followed by five republics so as to get closer to the principles they were fighting for. There is always a transitional phase, and it is often the worst. But it is something we have to go through.” However, he remains optimistic about the progress made in the Arab Spring so far. “The elections in Libya were very surprising; they elected liberals, not Islamists. And the idea of Mubarak in jail was impossible to believe before – now anything is possible.”

Maarouf attributes his love for the Arabic language to one very inspiring teacher at secondary school who made the language come alive for him. Maarouf began by imitating classical poetry, publishing work in the early 90s, before trying to find his own voice. “My work is a flow of images. It’s not very logical, but my main aim is to write poetry as nobody else has in the past.”

He has published three collections of poetry in Arabic, and numerous theatre and literature reviews in the Arabic press. Maarouf’s poetry has also been translated into numerous languages including English, French, German, Spanish and Chinese.

As for future plans, Maarouf will continue to write poems and articles. Although he remains committed to the Palestinian cause, he sees the Arab Spring, particularly the situation in Syria, as more urgent. His last collection of poetry to be translated into French (An Angel Suspended On The Clothesline) will be published in 2013. He is also working on a novel based on his experiences in Lebanon. Finally, he has started looking at Icelandic poetry.

“I will be translating Icelandic poetry into Arabic, via English,” he said. “I will be working with the poet himself to ensure the translations are accurate. It’s my way of saying thank you to Iceland for giving me shelter.”

Mazen Maarouf features in an episode of the documentary series “Poets of Protest”, which will be broadcast by Al Jazeera English on Friday 28th September at 19:30 GMT.