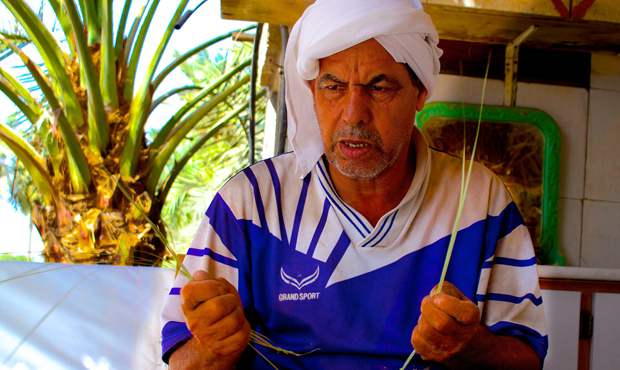 Five thousands years ago, the Sumerians called it the paradise of Dilmun. Discovered ancient manuscripts not only link the name with a small archipelago in the middle of the Persian Gulf, but also with great Mesopotamian myths.

Describing the nature of the land, the Sumerian epic “Enki and Ninhursag” tells that Enki, the lord of fresh water, blessed Dilmun with springs, and so it became the land of water, crops, infinite health and therefore the world’s harbor.

Today, it is known as Bahrain (“two seas” in Arabic), another indication to the land’s great natural resources. One of the theories on the origin of the name says that Bahrain’s first sea is the salty Persian Gulf, and that the second one is the natural fresh water. Divers used to resupply their ships with fresh water there, during the long distance pearl hunting missions that were conducted regularly in the pre-oil era.

Despite the fact that the countryside is tragically shrinking in a country that seeks more modernization and business, you can still notice the remains of Dilmun’s paradise and valuable legacy.

In one of the groves that shade the village of Buri, south of the capital Manama, Haji Habib welcomes us to spend the morning in his eighty years old property. We have a chat about the agriculture in Bahrain, and he seems confident that the country is capable of covering its domestic needs of vegetables.

“Bahrain is the home of million palm trees,” said Haji Habib quoting a very famous saying. Million palm trees on a land as small as 750 square kilometers means  that a palm tree is in sight no matter where  you look. “We have more of what you can imagine of palm trees” he said, while preparing some palm tree fronds to bind the day’s crop of vegetables.

Sadly though, the ego is always a bit stronger than the eco. The springs are killed one by one because of the oil industry. People are not interested in agriculture anymore. Yes, Bahrain is still charming and “greenish” – especially in comparison with its surrounding’s desert environment, but it certainly needs extra care and attention. According to Haji Habib “this worry is only because we truly appreciate the gift we have”

Bahrainis certainly do, but the real question is whether we do or do not know that agriculture served the island with a lot more than the crops; it made Bahrain a strategic harbor between the civilizations thousands years ago, so its people were exposed to diverse experiences which eventually shaped the current mindset and lifestyle in the country. It shaped it farther from the Arabian dessert traditions, and closer to Iraq’s (where the Sumerians used to live) diversity.

So why neglect such a gift? Apparently because “water, drainage, manure, and salaries all cost quite a lot – how much do you think a man could afford from selling vegetables,” said Haji Habib justifying those who gave up on their groves. He continues describing the investors who take more and more green lands and turn them into something more profitable. “The more greedy you become, the more hungry you will be, the more hungry you become, the more greedy will be, and so on.”

Although Haji Habib justifies the lack of interest in agriculture for others, he does not justify it for himself. He refused to think about leaving his land.

“I got it from my father, it has belonged to us for eighty years. What will you do if you have a son that for some reason cost you money and makes you tired, what will you do?,” he repeated emotionally. “You can’t just turn your back, this land is what my father left for me and it’s a big responsibility.”

During our chat, Haji Habib told stories that happened decades ago, which he still remembers by heart.

“The land always needs to be blessed,” he said. “One day a pious religious scholar was here for lunch, and there was a well we tried to dig earlier but we failed to reach the water. The moment this man stepped in, the water exploded in that well,” he continued. “There is no way to explain it, his blessings were all over the place.” Sounds familiar? It definitely does, its almost exactly Enki’s epic!

In Dilmun the raven was not yet cawing,
the partridge not cackling.
The lion did not slay,
the wolf was not carrying off lambs,
the dog had not been taught to make kids curl up,
and the pig had not learned that grain was to be eaten.
When a widow had spread malt on the roof,
the birds did not yet eat that malt up there.
The pigeon then did not tuck its head under its wing.”